He was a lot more ordinary than we expected…

Most people don’t associate a daytime session at The Court with intense theological discussion.

But I’m not here for the two for £5 Jaegerbombs. I’m here for Benjamin Chang – a third year UCL medic and author of ‘Evidence for the Existence of God’. 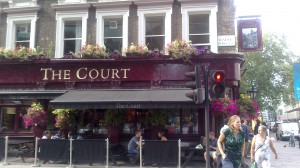 Yours for only $10.96, Chang’s fifth gospel was last month given over to the waiting world by means of a vanity publishing website, and offers the reader “a helicopter-ride through the disciplines of Science, Philosophy and History”.

“I’m not going to argue with this man”, I tell myself. “If I do argue, there’s a chance I’ll lose”. And we all know what happens when you lose against God. That’s right. You burn in hell for eternity. I’m not really into being on fire, so I decided to play it innocent – optimistically open to new worldviews, unjudgemental and untainted by religious debate.

As it turned out, however, there was no need for me to get my Louis Theroux on. The self-published author of this fifty-eight-page outline of Christianity wasn’t a bearded troglodyte, nor was he a boneheaded mercenary of the Lord in size 16 Crocs. He was a small man with a big smile and he offered to buy me a drink. 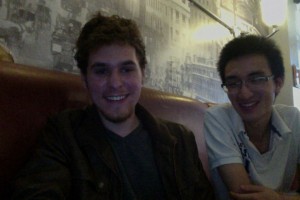 Chang loves getting in on a selfie

Things were a lot more ordinary than I’d expected.

Once he’d settled the tab, I asked him, simply, if he could convince me of God’s existence. What began, from this point, was a dense existential discussion that ended with me promising to read his book.

I ask him why, ultimately, he decided to write and self-publish his philosophical treatise. Was it to amass converts? Does he want Richard Dawkins to read it and be a rosary-toting Catholic by the end?

“Well, I’d rather he didn’t become a Catholic”, Chang quips.

“I wouldn’t say that if somebody does convert, that it’s down to my writing. It’s down to God. When someone converts, God does a miracle in their life”. He makes clear that converting to Christianity was his own personal miracle.

“It changed my life. It transformed my life. My life got meaning and purpose.”

As a former Atheist and self-confessed wild child, Chang, who admits to racking up “a few detentions” in his youth, became a Christian after an intense period of internet-based and ‘impartial’ research into his parents’ faith – a topic he’d long avoided out of teenage rebellion.

He pitches his book to me as a kind of spiritual throat cleanser. “Short enough to be accessible, but long enough to be superficial”. His aim is to give the public a summary of what helped him find Christianity – the conversation is a world away from the combative fire-and-brimstone fundamentalism I had been expecting.

“I don’t think it adds anything to Christianity” Chang tells me. The book is, in a way, his own way of reaffirming his germinating faith. I was surprised by his pragmatism and self-awareness. He says the power of the book can be found in the reactions of his close friends – some of whom he describes as “militant atheists”.

He tells me that the best thing that has come of it so far is that it made some of his godless acquaintances “think”. Though he mildly hopes to break even, he doesn’t really care about profit.

“I suppose the real reward is God’s love.”

Chang can’t deny that he would be pleased if a reader converted to his faith having read the book.

His evangelism, unlike the yelling psychos on US cable television, is earnest and thought-provoking. He recalls a quote by the atheist magician Penn Gillette, who said that “If you genuinely believed in God, and heaven and hell, how much would you have to hate someone to not try and convert them?”

“Sharing your Christian faith is like one beggar telling another where to find bread.”

Being a commoner and only familiar with mortal pleasures, I ask Chang if Christianity is ever as good as pizza. But therein lies my heretical ignorance. Pizza, just like all good things, is a manifestation of the Lord.

Still, I haven’t quite got a grip on what the good times are like in Christianity, so I ask Chang to elucidate a bit further.

“Well, everything I did before being Christian was for personal gain or for the gain of others. 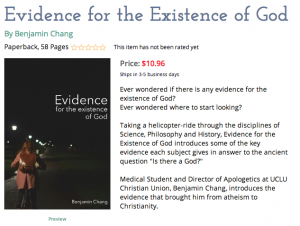 I begin to realise that my asking questions about pizza and mental house parties (“What’s the most decadent house party a devout Christian could host?”) had kept missing the mark. For Christians, the only house party worth RSVPing to is at God’s place. Life is the invite and heaven the event. And in this case, Chang fulfilling his invite means doing, in his words “whatever God says”.

I ask him what he’d do if God came into The Court and said “Benjamin, would you go and punch that woman sitting over there in the face?”

“I’d have to have strong evidence that it was God and it’s unlikely that he would ask that, as God prohibits…”

“Well no, not punching, but…lashing out without reason.”

But presumably he would have a reason, I suggest.

“Well, yes then, I would punch her if I knew it was God.”

I was initially shocked by this, but then realised something. If you know that paradise exists and that it is accessible through following God’s commands, how much would you have to hate yourself to not punch that woman?

And how much would Benjamin Chang have to hate you for you to not plug his book?