King’s has ‘humanely killed’ over 600,000 animals for scientific research since 2015

The College has published a full table detailing all of the animals killed and used in research between 2015 and 2018, which can be found below: 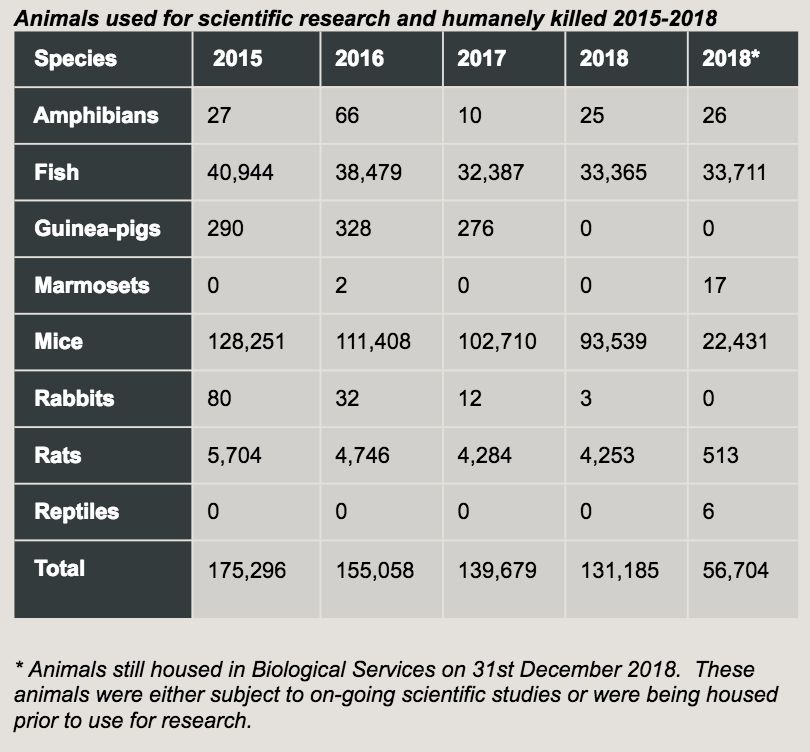 Table of animals used and killed for animal research between 2015-2018. (King's website)

The university has also provided some information on how and what they use these animals for prior to their deaths, classifying their use into three categories.

"These are animals that have been used for experiments under the authority of a project licence. Only individuals with a personal licence are able to carry out these procedures. All genetically altered animals (inclusive of mice and zebra fish at King’s) are included in these numbers, even if they are used for breeding or for tissue only. Many of these genetically altered animals are assessed to have undergone mild or no suffering."

"Some animals are housed at King’s for the sole purpose of breeding (mice, rats and fish). Healthy rodents are allowed to have up to 8 litters during their life span. All rodents used for breeding purposes are humanely killed after their final litter has been weaned."

Animals used for tissue only purposes

"Animals that are used for tissue only purposes are housed at King’s, but are humanely killed without ever undergoing a scientific procedure. Tissues are collected from these animals and may be used for a variety of purposes from cell culture to isolated organ perfusions. Where possible, animals will be used for tissue only to reduce the number of live animals that undergo scientific procedures."

You can find some more information about King's use of animals for scientific research here.

The King's Tab has contacted the university for a comment.

Eve is a regular at Dover Castle

I guess they are ‘smarter than people give them credit for’