A Durham second year has written a poem about classism she’s encountered at uni, saying she’s had people making fun of her accent, talking over her in seminars. She says she feels there’s a “massive divide” at Durham, which “feels like a uni for posh people”.

Aoifke Madeleine, who’s studying English literature at Durham, has written about her experiences of being northern, working class and state school-educated at Durham, where over one-third (36.5 per cent) of students went to private schools, compared with seven per cent of British people overall.

Aoifke’s at Van Mildert and, speaking to The Tab Durham, says going back home after living in college was a “culture shock”. In college, she was surrounded by ex-private school students who drank champagne at pres and would even just pour it over themselves. “I can’t even afford champagne, never mind drinking it and pouring it all over yourself,” she says.

She’s from a town in North Yorkshire, which Aoifke describes as “a working class town with a history very similar to Durham”. Her poem was inspired by her experiences at Durham, and those of other students who are northern and have faced discrimination. “I’ve always found Durham really quite polarising,” she says, “in its history of mining and working class compared to the university filled with private school kids.” 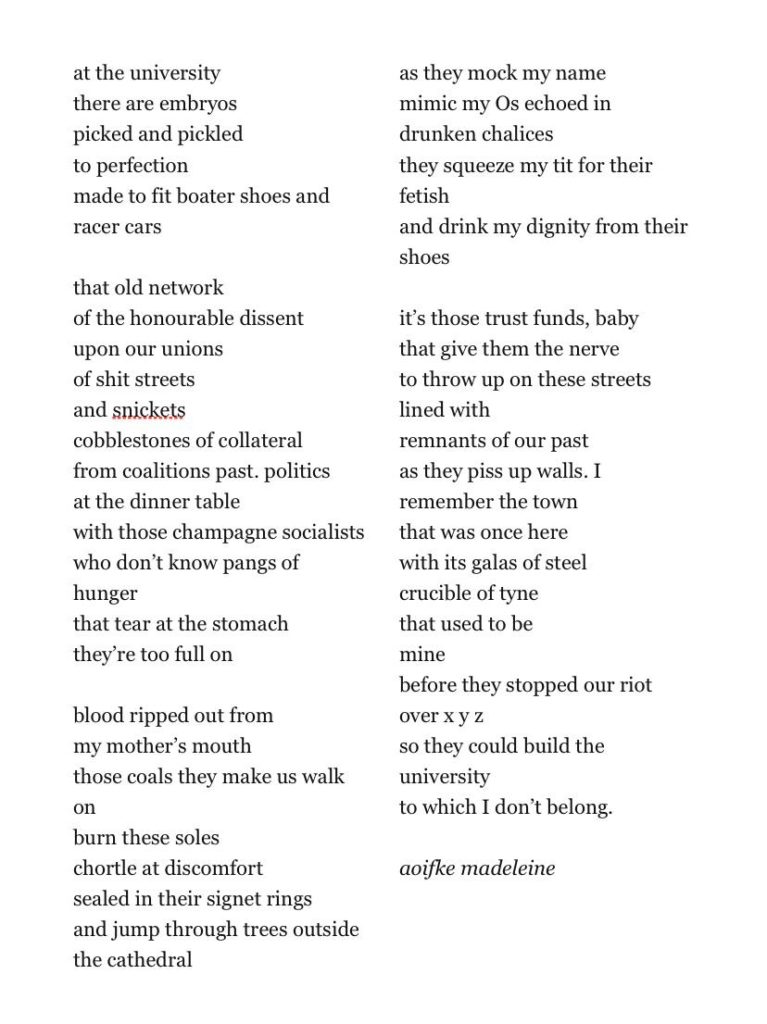 At The University, by Aoifke Madeleine

Aoifke spoke to The Tab Durham about her experiences of being a northern, working class, state school-educated Durham student. Here’s what she said:

‘I have to justify myself further because of how I sound’

Aoifke is keen to stress she’s friends with private school students and southerners – she has “nothing against” people who went to private school, but says there’s a “culture at Durham”, a “differentiation and divide” which she feels.

Aoifke says she and her friends have encountered people who make fun of their accents and mimic the way they speak, and says this mainly happens in seminars. She’s often been in teaching rooms of eight people where she is the only northerner and only person with an accent like hers. “I’d speak in seminars and hear sniggers at how I sounded, how I pronounce my ‘o’s. I’d turn up and people would just talk over me, or be very posh and ask me weird things about my accent.”

She says she feels other students look down on her because of her accent and often talk over her, which makes her struggle to speak or feel she has to “justify absolutely everything” she says in seminars. “It feels like every opinion that you have is put down or people attempt to disprove it. When you speak in an accent like this people just associate it with those stereotypes of people being dumb or stupid or not knowing what they’re talking about. I feel like sometimes I have to justify myself further because of how I sound and how people perceive me.”

‘The divide is massive’

Aoifke says she feels like “the divide is massive” at Durham. “It’s so strange that how I speak causes people to demean me or think they can treat me in that way.”

Aoifke says she’s heard other students refer to the north as a “shit hole”, or say “wow, they accept state school kids here?”

She’s also heard from a friend about people saying they have a “poverty fetish” and want to get with northern students because of this.

Another time, she was with someone who said “oh my god, Durham bangs on about the miners all the time, it’s so weird”, whilst they were in a public place, surrounded by Durham locals. “I was so embarrassed,” Aoifke says. “It’s such a rich history here, how dare you speak about it in such a demeaning tone?”

As well as overt classism, such as people making fun of her accent, Aoifke says many of the issues she encounters are part of the culture and “general atmosphere” of Durham, saying she thinks “there’s a lot of structural things that need to change”.

“Durham feels like a uni for private school kids and posh people because of its elitist ways,” she says. “When I go to formals it’s such a jarring experience because I feel like it’s not meant for people like me.” She describes how you have to wear gowns at formals, and says she loves dressing up for balls, “but it feels so separate to everything I have at home”.

Durham is one of the most elite universities in the country, and lets in fewer state school students than Cambridge University. “The statistics speak for themselves”, Aoifke says, and says she feels “just a quota or part of a statistic that the university admit so they look better”.

At uni, she’s surrounded by people with “such different upbringings” to hers. They went to private schools; their parents also went to elite universities; “they have contacts and connections and can afford champagne to pour over themselves”.

She’s had people ask her in clubs what school she went to, and says she thinks “‘I went to a state school in the north, underfunded, you’re not gonna know it’. But they’re asking people, being like ‘oh yeah, Harrow, I know you’. They already have that old-school-type network.” She says it must be nice for them to have friends and a network before they come to university, “but where on earth do I fit in it when I went to a state school, sound like this and am from a very working class town?”

She says when she came to uni she missed hearing accents like hers, and was glad to make friends with some other northerners. She says it was “tough”: She felt “alone” and “separate from everyone, because I felt very different” to those she was surrounded by at uni.

‘There’s a lot of change that needs to happen’

She struggles a lot with her identity as a working class student at an elite university, and talks about a Guardian article she read about someone from a working class town near hers, who was told “you’re part of the elite now” when she began studying at Oxford. “I’m at Durham, am I part of the elite now?”, Aoifke says. She says she never thought she’d be part of “the elite”, and often questions if its something she even wants to be part of.

“Am I betraying my roots, my upbringing and my own identity?”, she says. Aoifke describes lessening her accent in tutorials, or putting on a “posh accent” around certain people: “It’s just a reflex now so people take me more seriously.”

Aoifke’s part of Durham’s 93 per cent club, which she made sure to join early in her first year. Writing the poem has helped too, as after she posted it on social media she’s had many people at elite universities around the UK reach out to say the feelings resonated with them.

Aoifke says she believes “there’s a lot of change that needs to happen” to change the atmosphere at Durham for students like her. She says there needs to be “more support to enable kids from state schools” to apply and study at Durham, and says the 93 per cent club is doing “amazing work in trying to change the culture” of the university.

Eight people were jailed after she was killed

Um, so someone on TikTok revealed the true meaning of the Macarena and I am in shock

Literally my whole childhood was a lie

Put the bass in your walk

Bridgerton has just been renewed for a season three AND four!!

My life just got so much better

There are only four iconic teen girl movies, but which one is actually the best?

True crime documentary ‘Why Did You Kill Me?’ is being released on Netflix tomorrow

This is what it was actually like to go on CBBC’s Trapped, by someone who was on it

Okay but all I wanna know is, do you actually get trapped?

Ollie Ball has a merch line

Quiz: The Devil Wears Prada quotes are iconic, but how well do you know them?

Can you please spell Gabbana?