‘We’re not vandals, we’re not thugs, we don’t do this kind of stuff for no reason’

Extinction Rebellion (XR) returned to the front lawn of Trinity College this afternoon, handing out assorted wildflower seeds in order to "re-wild the planet and grow something new".

This follows a controversial protest carried out by XR earlier this week. On Monday, activists dug up the lawn around Trinity College's Newton's apple tree, making local and national headlines. The move resulted in arrests on account of criminal damage.

Today, following a collaborative UCU (University and College Union) and XR protest – in which XR activists told The Tab Cambridge that they are standing in "solidarity" with UCU strikers – members of the movement returned to the site of the lawn, which remains desecrated. 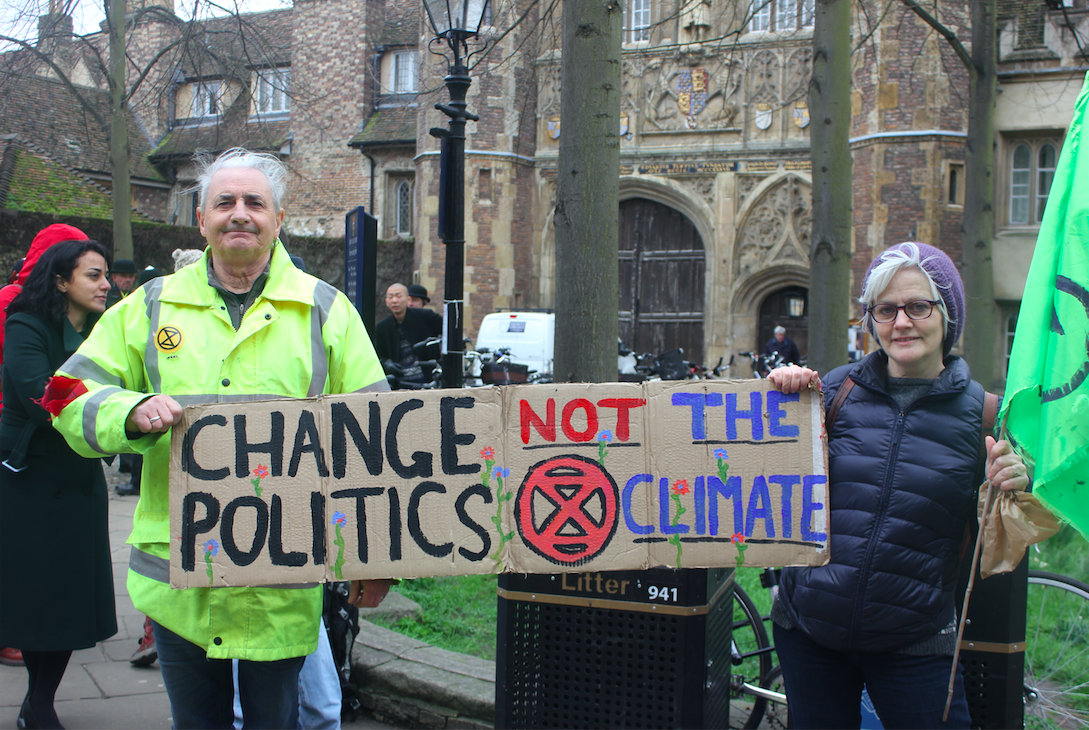 One activist told The Tab Cambridge: "We're not back here to apologise, and the statements we made with regards to Trinity lawn still stand. We're here to move forwards and to progress, we're here distributing wildflower seeds.

"We've got thistle, we've got bugle, we've got all sorts of assorted wildflower seeds. It's really important to re-wild this planet and to grow something new. So come along if you want some seeds to plant in your garden, or wherever it may be. There are plenty of grass spaces in Cambridge that could do with some wildflowers."

He added: "In fact, big up King's College who have just re-wilded their back lawn. It's a positive movement to clarify to people who don't understand what happened here, why this lawn has been tampered with".

Asked whether he was involved with the activities on Monday, the activist commented: "I was not involved with the original tampering; that's because I was in a lecture". He said: "I support the movement […] If it seems vandalous [sic] to you, please look into the reasons why."

He concluded by saying that "we're not vandals, we're not thugs, we don't do this kind of stuff for no reason". 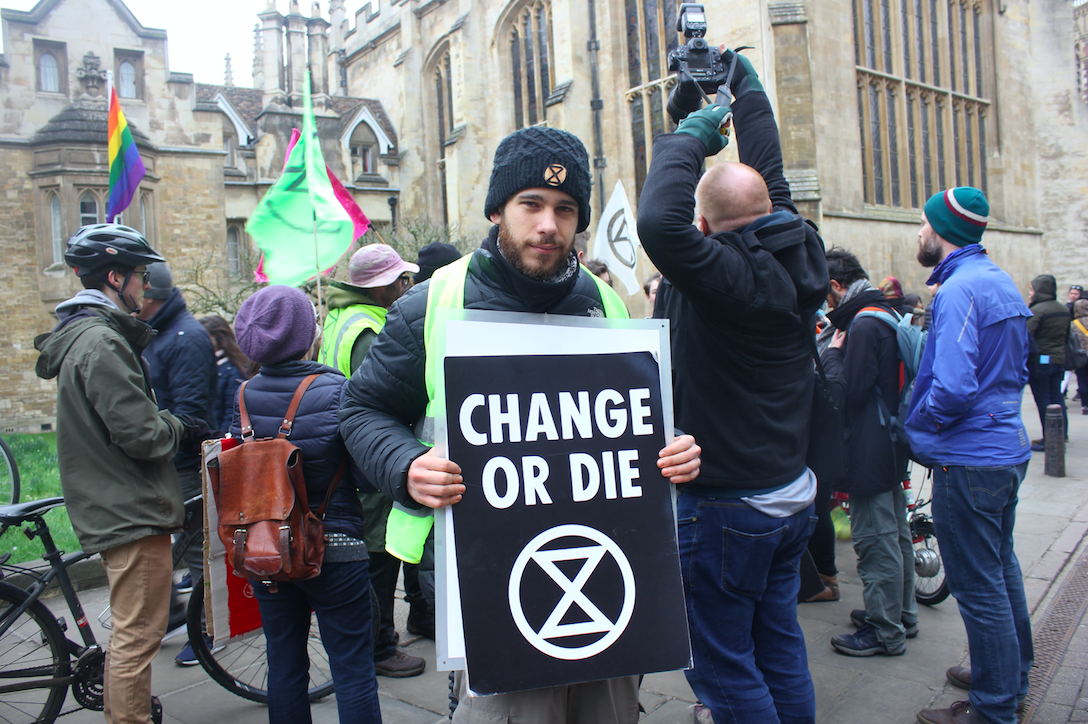 Extinction Rebellion originally dug up Trinity lawn in order to put pressure on Trinity College specifically "as one of the largest investors in the fossil fuel industry". Digging up the lawn supposedly symbolised digging for oil, an industry from which Trinity has failed to divest.

Another XR member told The Tab Cambridge today: "For the first time, the university unions are coming together with climate activists in order to make a joint effort, in order to make sure we get system change.

"We need to really stand up and support our brothers and sisters in the unions to make sure there is change happening", he added. 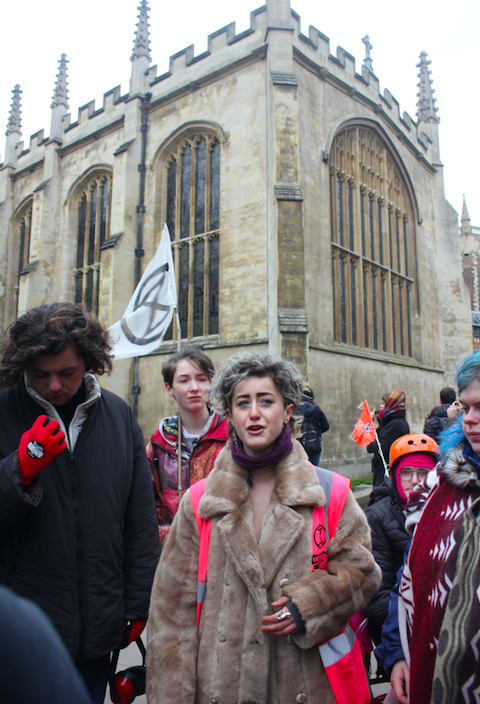 An XR member delivers a speech outside Trinity 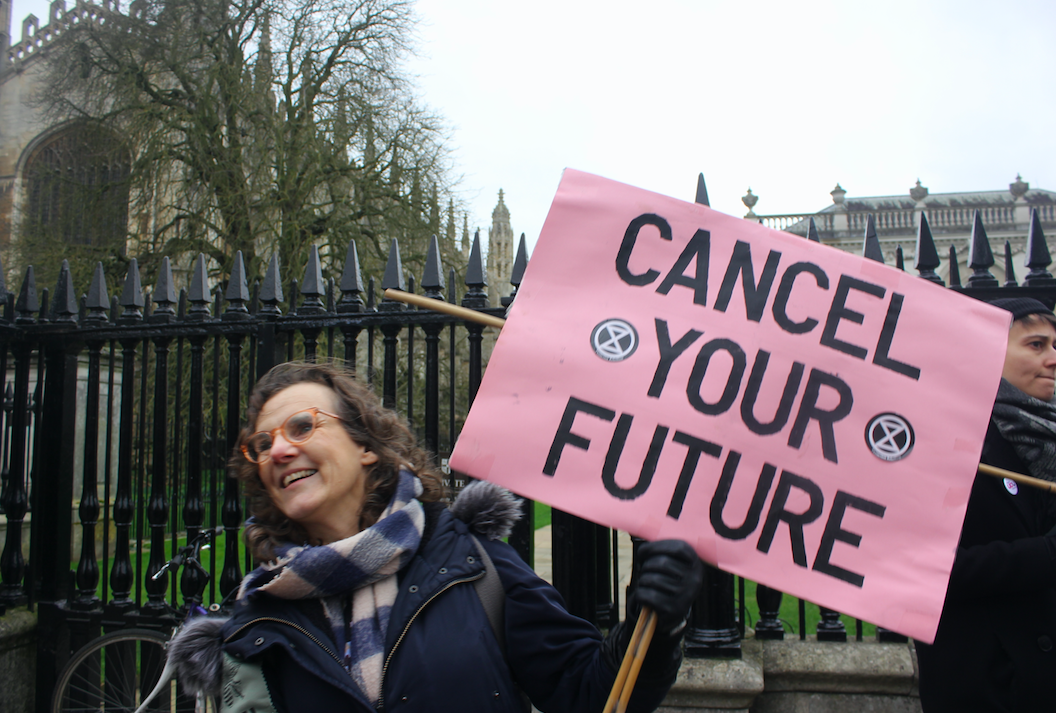 A protester outside Senate House

In a speech made outside Senate House, Jason Scott-Warren, a climate activist and English Fellow at Gonville and Caius College who has previously been fined for his involvement with Extinction Rebellion, said: "XR has in the last week in Cambridge become pretty darn controversial." 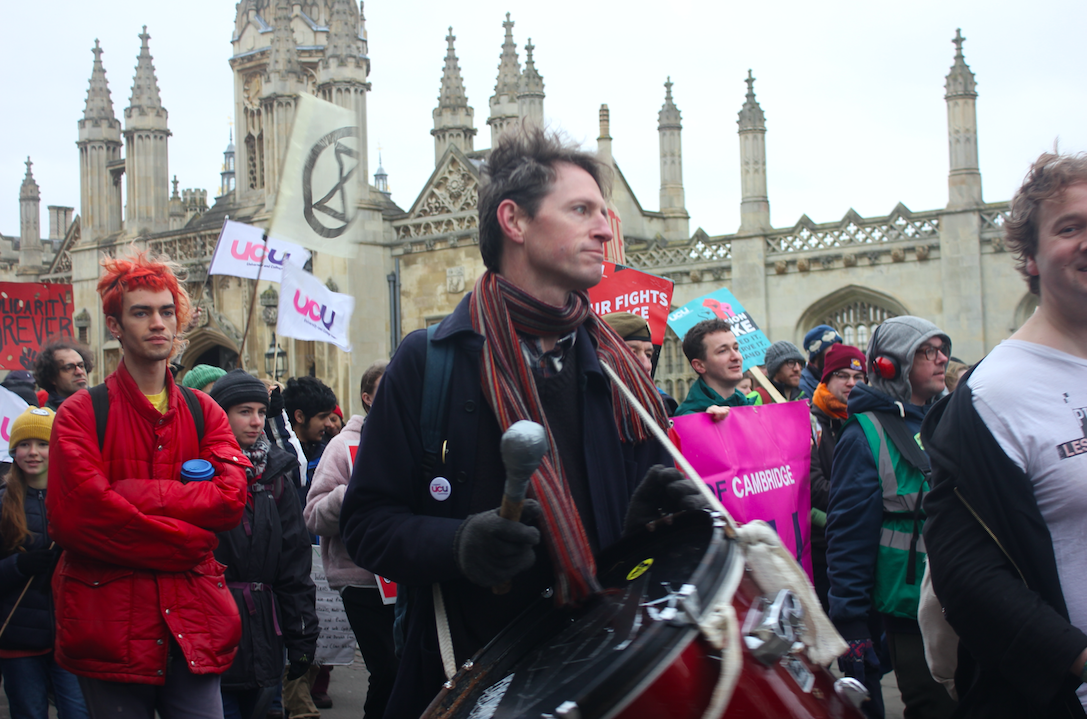 He continued: "Where do UCU and XR meet? Firstly, we're taking action, we're occupying space, we're standing out in the freezing cold and wet to stand up for our rights, and the rights of future generations.

"Second, we're taking action which is in many ways painful, action that has an impact on people that aren't the immediate cause of our problems, actions that might impact on our students if we're lecturers, on the general public if we're members of XR, when our real beef is with the university administrators […] sitting in their splendour, and with our elected representatives who we need to jolt out of their torpor so that we see action on climate breakdown.

"And thirdly, […] everyone here is joining the dots. So we see the links between the mechanisation of the university; the demand that every academic should lay certain number of articles every year like a battery chicken, and the kinds of exploitation that have brought our ecosystems to the point of collapse." 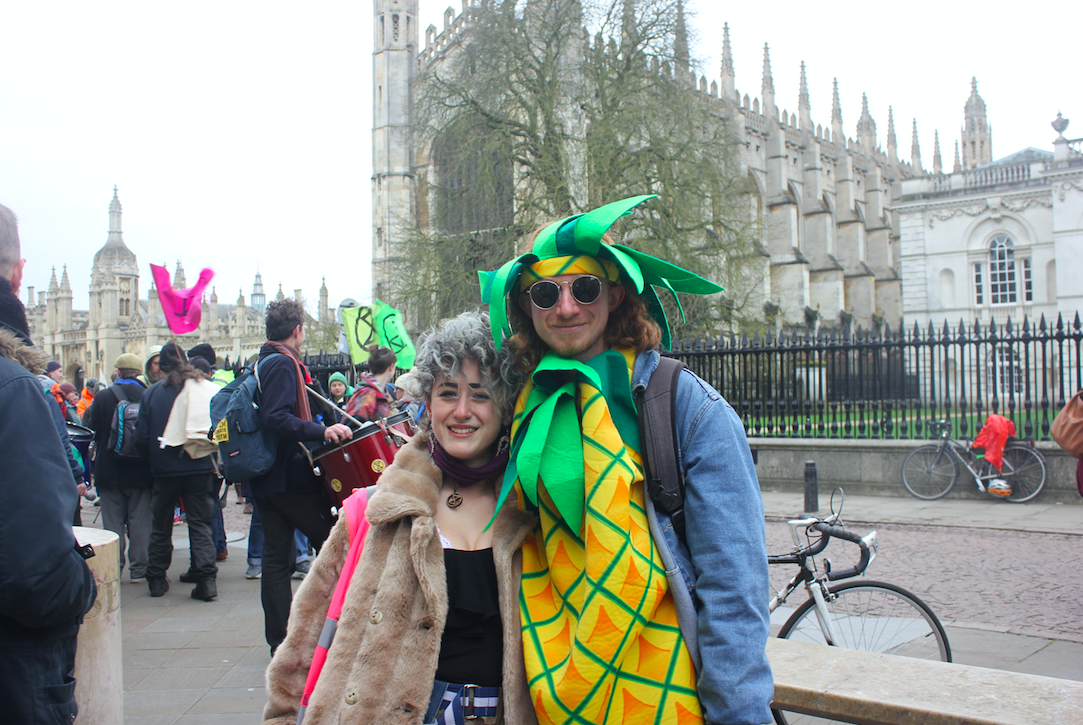 One XR activist was loyal to the wildflower theme 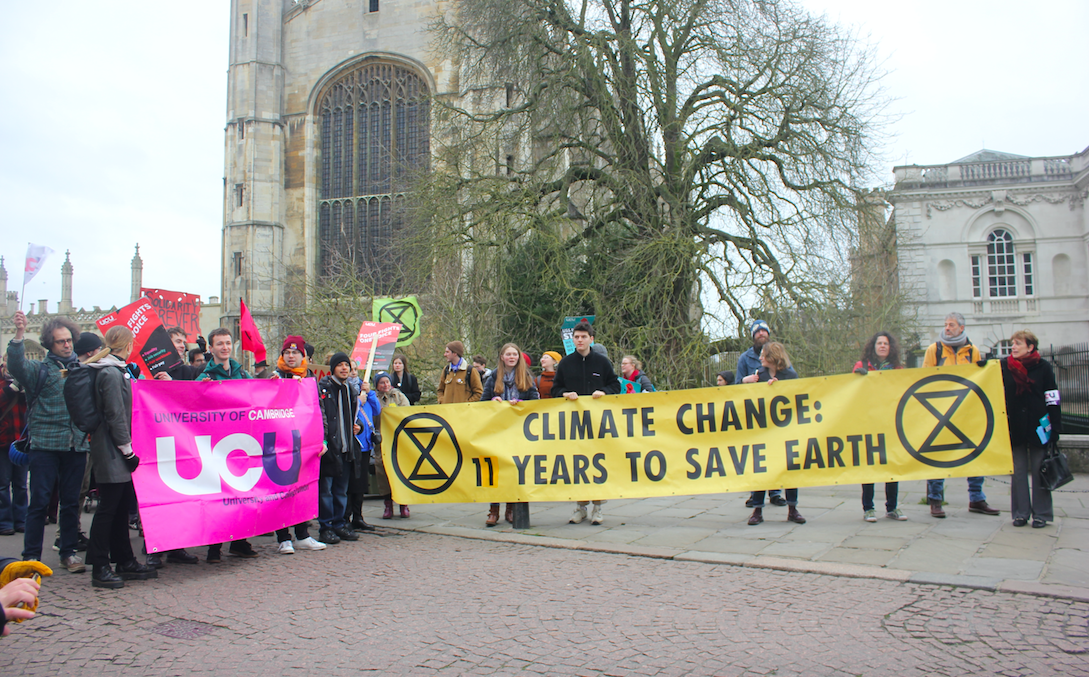 UCU and XR come together

A further activist told The Tab Cambridge that "one planet means one fight, justice extends beyond the climate crisis".

In response to the actions of XR earlier this week, Trinity College commented: "Trinity College regrets the criminal damage done to its property beside the Great Gate.

"The College respects the right to freedom of speech and non-violent protest but draws the line at criminal damage and asked the protesters to leave. The College is liaising with the Police.

"Academics at Trinity are actively engaged in research to understand and develop solutions to climate change, and taking practical steps forward. The College fully supports the University Initiative, Cambridge Zero." 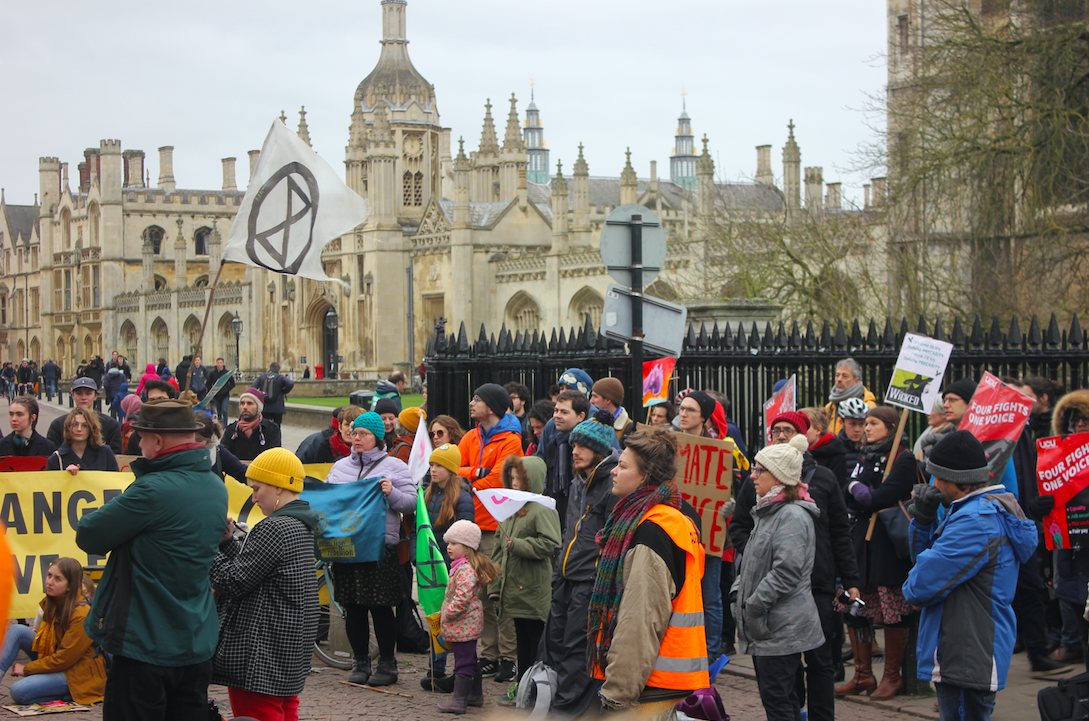 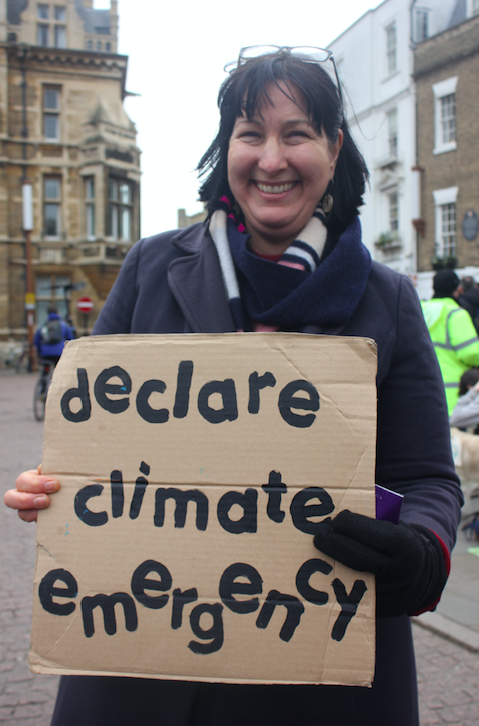 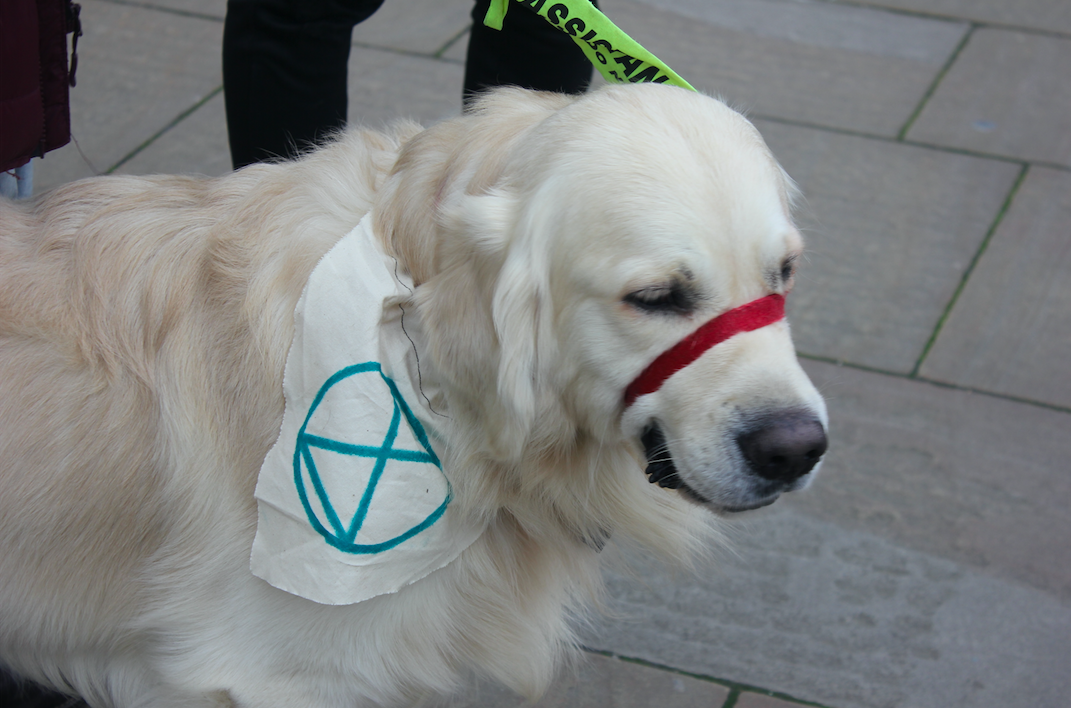 All photos are the author's own.