This morning, environmental campaigners dug up the lawn around Newton's apple tree at Trinity College.

The activists are from Extinction Rebellion, a global environmental movement with the aim of using nonviolent civil disobedience to incite government action to tackle the climate crisis.

When questioned about why they've targeted Trinity, one protestor, Charlotte, said: "We wish to put pressure on Trinity College specifically as one of the largest investors in the fossil fuel industry.

"We have heard indirectly that Trinity College are considering redirecting their financing but we don't feel that's it's happening quickly enough and we want some serious action." 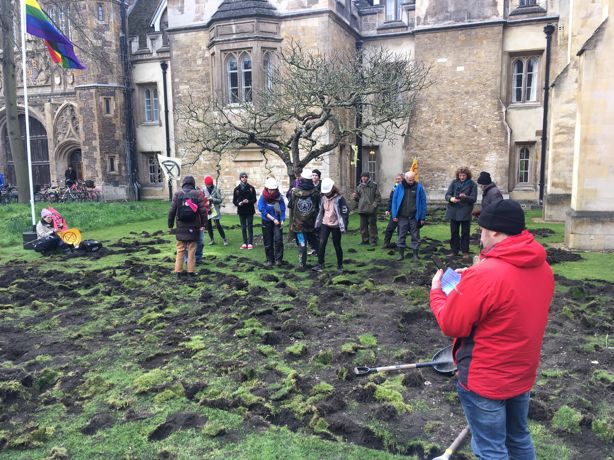 Digging up the lawn supposedly symbolises digging for oil, an industry from which Trinity has failed to divest.

Alex, another campaigner, said: "The symbolism is that we think digging is insane. Trinity College is still funding digging for oil, and if they love digging so much, we thought we'd dig up their front lawn for them."

One protester has even chained himself to Newton’s tree.

The campaigners criticise Trinity for hypocritically claiming to be concerned about the climate crisis, while still continuing to profit from exploitation of natural resources and pollution.

They claim Trinity haven't meaningfully divested and likely still have vast amounts of money invested in the fossil fuel industry. 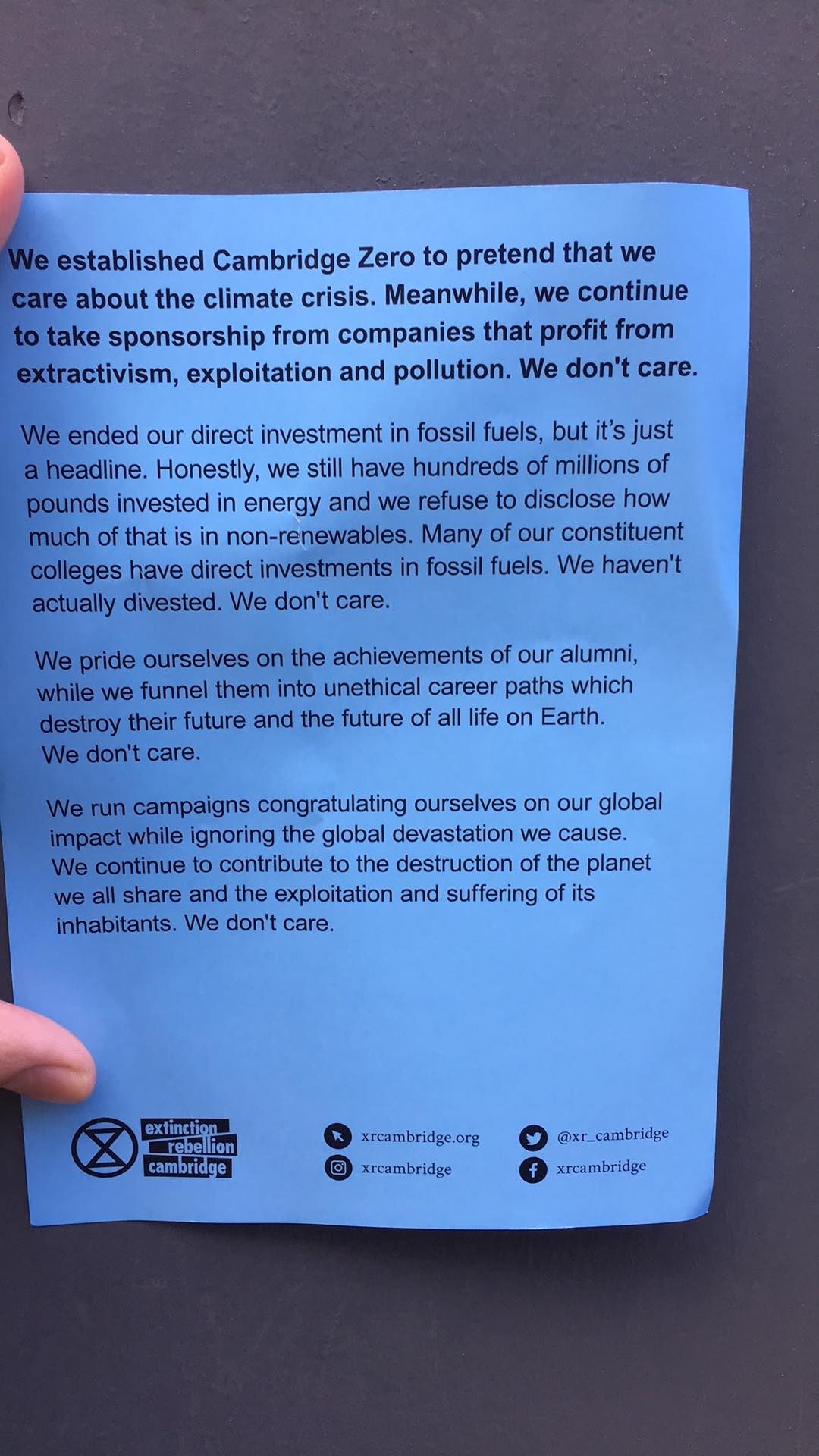 When asked for comment on their action, Extinction Rebellion said: "The grass will recover. It is ecologically dead anyway. Our planet won't. Trinity must divest from fossil fuels and cut its ties with fossil fuel companies. Oh and it should take the opportunity to replant the lawn with flowers. Spring is coming."

"Trinity College regrets the criminal damage done to its property beside the Great Gate,

"The College respects the right to freedom of speech and non-violent protest but draws the line at criminal damage and asked the protesters to leave. The College is liaising with the Police."

"Academics at Trinity are actively engaged in research to understand and develop solutions to climate change, and taking practical steps forward. The College fully supports the University Initiative, Cambridge Zero."

In light of this breach of security at Trinity, St John's has been placed on lockdown, meaning the gates have been locked and a University Card is required for entry to the college. 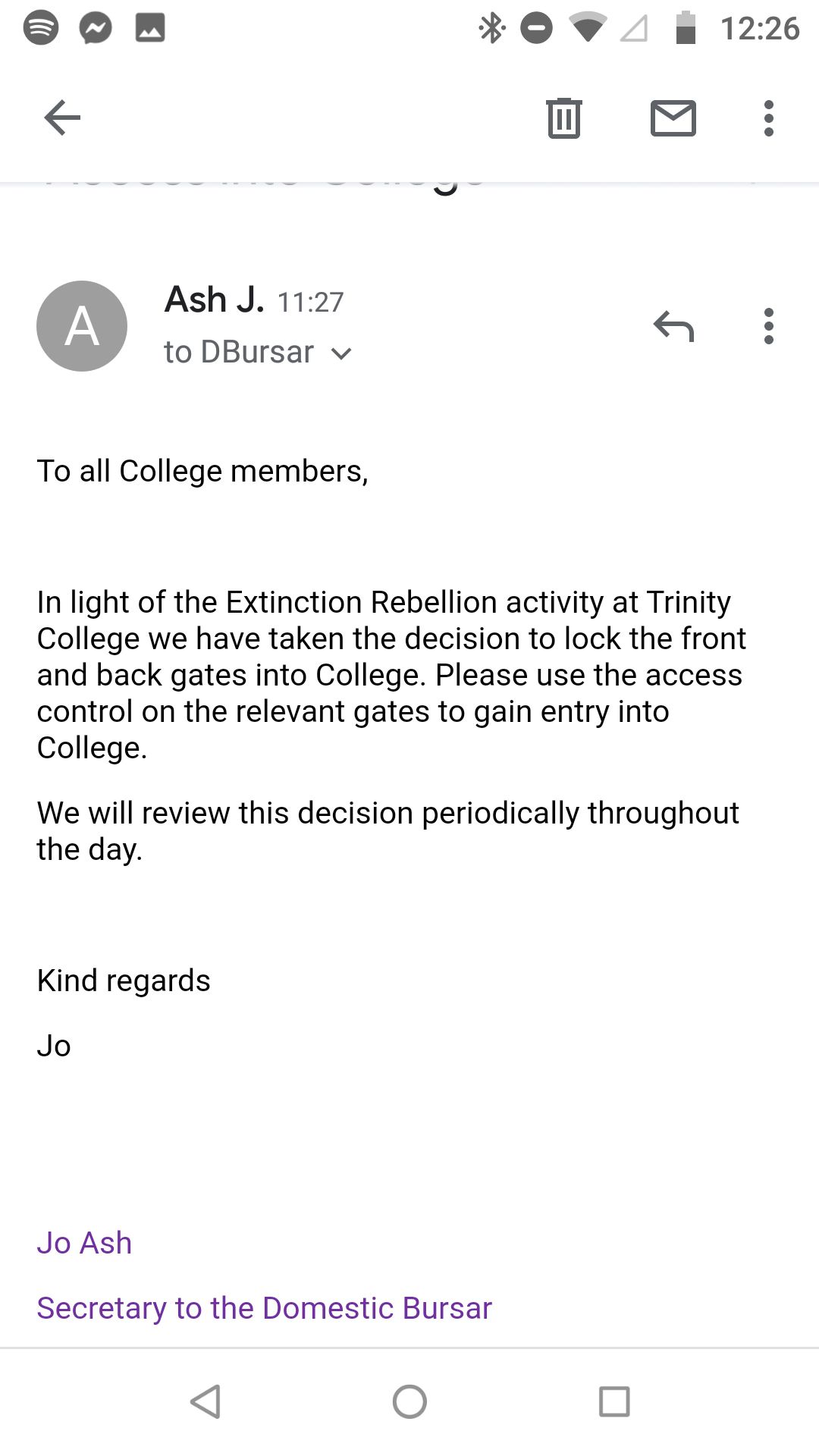 This marks the beginning of a week-long series of planned protests, including a street blockade, which has prompted the police to use emergency powers to shut off roads.