The Tab Talks to Miz Cracker

World Renowned Drag Superstar Miz Cracker decided to pop to Cambridge for a show, a lecture, and most significantly a cheeky little chin wag with this lucky editor

Last Tuesday the one and only Miz Cracker performed at Glitterbomb to wildly enthusiastic crowds. However, on the Saturday before that Miz Cracker made an urgent appeal on Twitter, and this editor stepped up to the plate and helped her out: 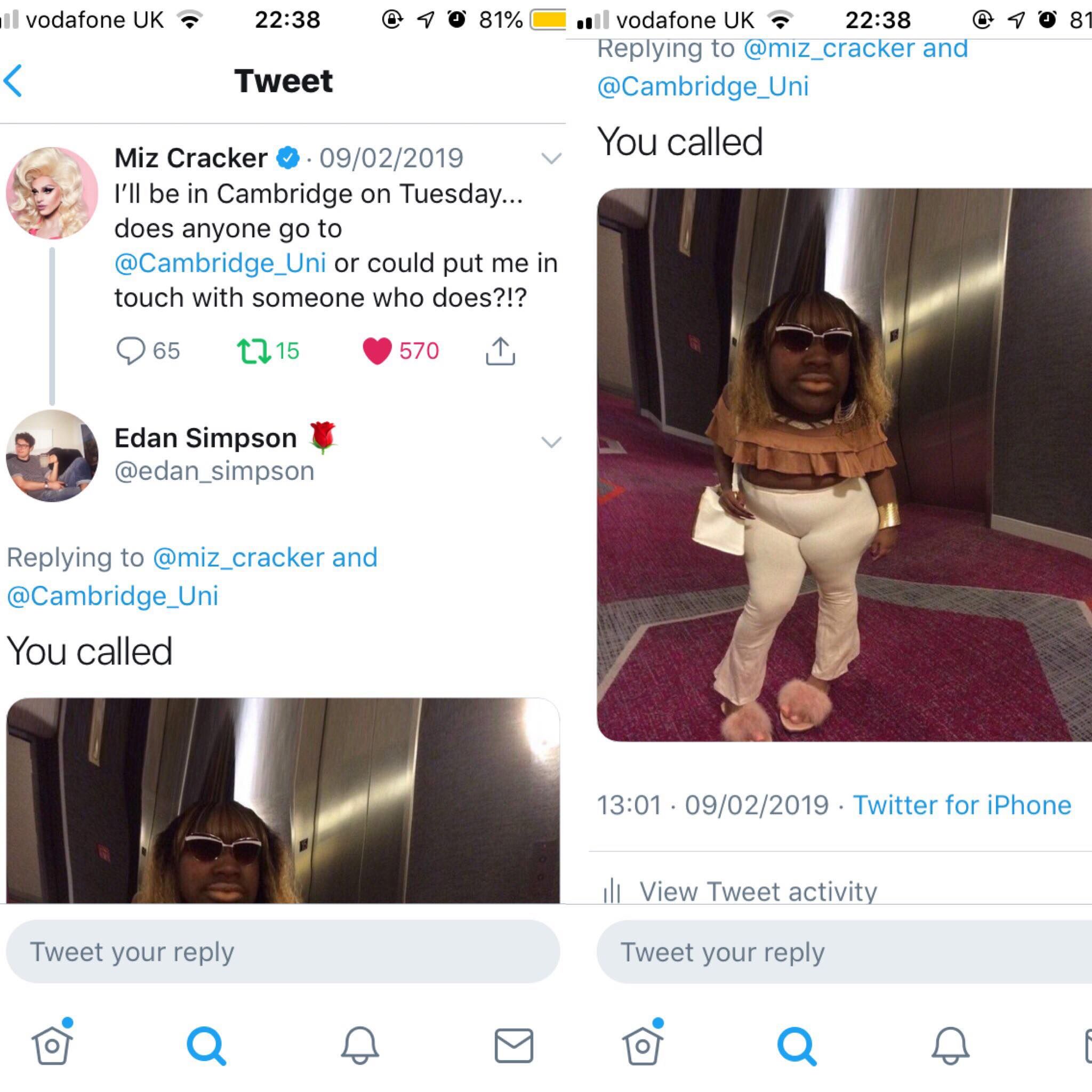 I'm going to give the gays everything they want

Following this, Miz Cracker gave me a follow and slid into my DMs, and a few frantic emails later I managed to book Emmanuel College Chapel (I am eternally indebted to the Revd Jeremy Caddick for allowing us to use the Chapel) for Miz Cracker to deliver a lecture on the history, future, and inclusive nature of Drag. The talk was fascinating, academic and extremely well received. And, as a bonus, I was able to snatch an interview with Emmanuel College's guest of honour, please enjoy the following transcript xoxo

The Tab: What would you say are the biggest differences between British Drag and American Drag?

Miz Cracker: The biggest difference I think is that the queens here have not expected to be on television. And I think that the climate in America has changed where EVERY queen that starts Drag is expecting at some point to be on television. So that changes the climate completely for a Drag community. And what I'm seeing now is that transition where people are beginning to expect that for themselves here, and it's a wonderful thing and it's a dangerous thing that requires the community to think about carefully as a whole, so they have a chance to handle it a little bit better than we did in the states.

The Tab: On a Drag Race theme, Gia Gunn has been on All Stars 4, she was brilliant

The Tab: ABSOLUTELY, she was great telly, but as she was the first Queen who was public about being Trans in advance of her All Stars debut, do you expect that trajectory to continue and that we should expect to see more Trans queens, AFAB queens and even Drag kings on the show in future? Or will it continue to be near exclusively cis gay men?

Miz Cracker: Well, RuPaul started Drag Race with the idea of it being what he had experienced and then it launched a whole new world of drag that involves straight women, straight men even, and of course as it always has done, Trans women and everyone that's on the spectrum. It created something so big, that he essentially no longer has control over it. And I think that the people on the show will reflect what the fandom demands, because I think he is responsive. You know, he's been through a lot and so of course he values his own opinions, and he listens to himself first, but ultimately he does listen to what we want. So I think it'll reflect what we ask for and I think we should ask for diversity, because the whole thing is "everybody say love" and it should definitely reflect that.

The Tab: Keeping to the topic of Drag Race, Manila Luzon was obviously the front-runner for the crown but now she's gone, so who are you currently backing to win this season of All Stars?

Miz Cracker: I have not often had this problem, where I support a lot of people…

The Tab: Same! Like it could literally be anyone, Monet has done so well, Monique has glown up beautifully, Trinity has been stacking so many wins and Naomi just epitomises C.U.N.T!

Miz Cracker: I mean, Naomi has proven herself to be formidable. She's funny, a great performer, incredible fashion queen and there is no doubt that if she took the crown she would do something amazing with it. Trinity, behind Manila has been one of the most incredible performers overall. Monét is my closest friend in the drag world; we grew up together like how can I NOT fucking cheer for her, and Monique constantly surprises people with what she can do. If you ever seen her in perform in person you'll see she is the most mesmerising dancer. I can see them all winning the crown and all of them doing something really incredible with it.

The Tab: I've never been so stuck!

The Tab: It's almost a good thing that Manila's gone, because she was like this powerful juggernaut in the competition and now she's gone it's levelled the playing field a bit and anyone could win-would you agree that it's actually made for better TV?

Miz Cracker: Yeah and Manila gets a democratic win, in the way that Bendelacreme or even Shangela did. And Latrice will go out with tremendous respect and a lot of support. You know like, there's a lot of winners!

[SPOILER ALERT: There was] 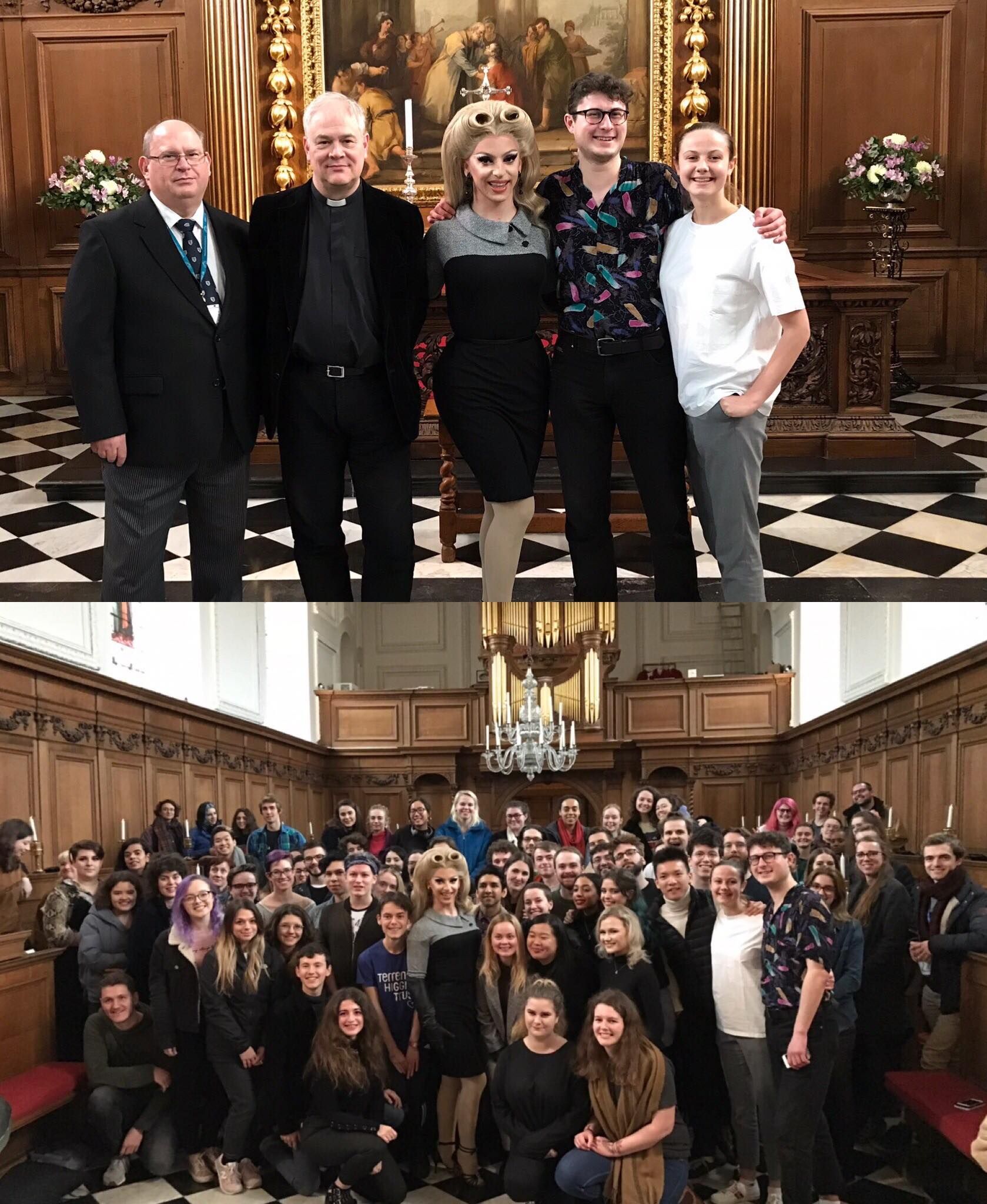 Miz Cracker with her Emmanuel welcoming committee, and the hordes of people who attended her talk (photo credits to Emmanuel College Student's Union)

The Tab: Speaking of winners, if there was a winner's season of Drag Race, who would you back and who do you think would win?

Miz Cracker: A winner's season like, *sigh* Alaska is SO amazing, there is no end to what she can do. And like an idol of mine, and someone who supported me all the way through Season 10 is Trixie, like I think every winner has a lot to offer but those are the Queens I just happen to know and that have been supportive, and so I have to say those names.

The Tab: Would you yourself ever take part in an All Stars season if you got the call?

Miz Cracker: You know, there is such a draw to do Reality Television because it's so exciting. But I think for me, I haven't had a chance to engage with reality itself for a long time.

The Tab: I can imagine! Like how much time do you actually spend at home?

Miz Cracker: Maybe like 4 days in a month maybe over a year! And so I would really like a chance to engage with the real world for a little while. Maybe another time, like every time I see someone on TV I'm like "God I wish I could be back there", but like I need to see my family, spend time on projects that are important to me as a Queen for a little while! You know what I mean? Now is not really the time.

The Tab: Would you say Drag itself is innately or inherently political?

Miz Cracker: Well the great thing about Drag, especially in a time when there's play with purpose, educative play, sex that's supposed to be for intimacy. A time where because of capitalism we have to figure out a reason and a validation for everything that we do, or it has to make money in some way, it's very nice that Drag has no purpose at all. You can use it for whatever you want it to be, it can be political if you're political, it can be for Trans activism if you're a Trans activist. It is like a rock, you can hit someone over the head with it, or you can put a nail through a wall, you can stop a door with it. By itself, it has no purpose, and it's up to you to bring a life to it. So I don't think it's inherently political, but you know, it can be. And I think that especially in this time, you know Drag Queens should talk about politics.

The Tab: One last quick question, what's been your favourite city in the UK so far?

Miz Cracker: [to her famed companion Caitlin] Caitlin's where's our favourite place been?

Caitlin: Edinburgh, but that's Scotland does that count?

The Tab: It does for now!

The Tab: Ha! I love that you pronounced that like such an American!

Miz Cracker: "Eeedin-burg"! But yeah, besides one city that shall not be named, we've just loved EVERY city that we've been to and don't really want to leave! And you see on Instagram, that every morning, we get up after the show and we go out and we see the UK and we've never been happier anywhere else in the world and don't want to leave! I think we can stay for a year on our visas

The Tab: Please do!

Miz Cracker: I wish, but I really want to come back!

I will only accept Queen Alexis

First year can be physically and emotionally draining

I just want to be Ruby, is that too much to ask?

Forget Ruby and Adam, we all know Colin Hendricks is the best Sex Education character

Emily Sands is one lucky woman

The 50 unis with the most expensive halls, according to the Good University Guide

You might as well be living in Spen-tonville Prison

Jean Milburn is like a fine red wine, she gets better with age

How do I join them, please?

The Great British Bake Off is boring, and if you think otherwise you’re lying to yourself

Forget the bakes, it’s this slog of a series that’s got the soggiest of bottoms

You’re telling me the girls just wake up in full makeup?

I adore all of these characters so much it hurts

Number one is a shock but FULLY DESERVED