People were chanting ‘this is what democracy looks like’

Through the rain this morning, students marched to protest what they have dubbed a 'Divestment Stitch-Up.'

Students were marching after a Guardian article revealed that two of those in the Divestment Working Group were directly involved in considering taking considerable donations from fossil fuel companies – BP and BHP – whilst they were deciding on the university's policy on divestment. None of this was declared to students or staff.

This meant this march was not as broad ranging as the last, with more of an explicit focus on the lack of transparency in the university decision making structure. However, the more broader calls of 'divest, disarm, decolonise' were still present.

The march started at 12:30pm outside Senate House with a range of speeches – with one activist saying quite emotionally that "we thought [Cambridge] was a place where change can happen, a vehicle of Enlightenment", but ultimately that as a body they had "let us down."

After these speeches, the march followed a path past Johns and the Union before heading back via market square towards King's Parade. Chants included "Who's University? Our University" and a divestment from Fossil Fuels version of "When the Saints Come Marching In." The crowd was large despite the grim weather, managing to hold up a bus as they made their way through town. 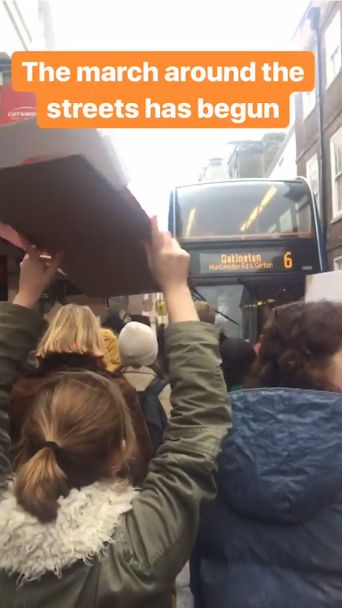 A snap from the Tab's Insta Stories to cover the event

As usual, the march came to its conclusion at the main doors of the Senate House. Here there were more impassioned speeches. To begin Claire Sosienski Smith, the Women's Officer at CUSU, reminded that crowd that "we should not be disheartened", and reminded the university that "we are not satisfied with how it is". She showed how the lack of democracy in the university structure was an issue bigger than just divestment, adding that "we will keep holding this university to account until they learn that this is our university."

At this point, the rain worsened but the students were not discouraged. The employees of Senate House seeming anxious about their presence as when an employee came to enter they would not open the door for him. It was clear they wanted to avoid any possible clashes with the protesting students.

Finally, there were speeches that focused on the importance of recognising the privilege we have as university students in a wealthy western state. It was brought to the crowd's attention that climate change is an issue which often affects the poorest and minority groups the most – one fact given being that women are 14 times more likely to face hardship at the hands of a climate catastrophe. 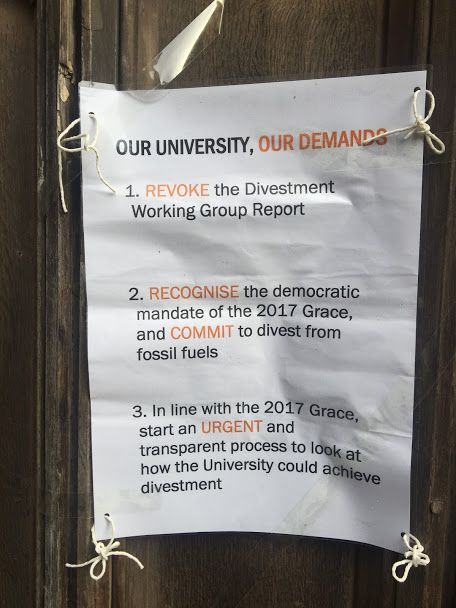 The demands of the students on Senate House door

Demands were stuck on the door of Senate House with a clear message that if the demands were not met the protesting students would not stop making their voices heard. There seemed to be a great outrage amongst the students there who really felt like the principle of "our university" was not being upheld.

As student speakers reflected on the need for democracy and clearly stated that, perhaps even next Friday, they would be back it will be interesting to see how the university intends to eventually respond to what has been dubbed their "devastating complicity" in climate change.

Review: ‘What’s wrong with me?’

Hit and miss overall, but where it does hit the spot, both hilarious and meaningful