The results are in: The Tab’s BIG LOVE SURVEY

In other words, Tinder is riddled with English students

We asked, you answered. In the name of Highly Scientific Enquiry and Top Notch Journalism™, we quizzed a pool of current Cantabs about their online dating habits. Our aim was to uncover how relationships are (or are not) forming in Cambridge in the digital age, and what this suggests about the way we are now interacting with one another. And also because we’re lonely and had nothing better to do.

78% of men and 70% of women answered that they use dating apps. As for the top three most popular apps of choice, it is unsurprising that Tinder was the most common, with 73.2% of students claiming to be on the platform, followed by 31.6% on Bumble and 10% on Grindr. English students appear to take up a large population of the dating app world, with 92% of respondents reporting usage, followed closely by Law students at 91%. Classicists, on the other hand, have the lowest representation at 40%. Et horror! 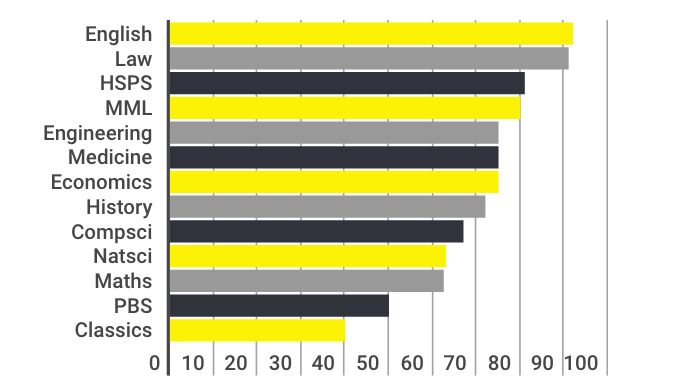 Churchill takes the crown for the most swipable College: 91% of those who responded from the College reported using dating apps, followed closely by both Clare and John’s at 87.5%. The lowest College representation from those who answered the survey came from Peterhouse, Corpus and Queens’ at 50% — however this amount is still hugely significant and suggests the extent to which dating apps have permeated the student experience. Those who reported not being on any dating apps on the other hand appear to be rather set in their ways; when asked if they would consider downloading a dating app at any point, over half answered ‘No’. When we asked our pool where they meet people if not on dating apps (we promise this question was for research purposes only), we were appropriately sassed: ‘just through living my life as normal’. Ouch. Perhaps we should give that one a go. Our burnt egos were soothed by the ice pack of another respondent’s simple but resonating answer of: ‘ 🙁 ‘.

The next round of questions asked students who are on dating apps about how and why they use them. The most popular reason for being on the apps came down to boredom and entertainment, with 38% of respondents opting for this answer — many students admitted that they use the app in social situations, with one answer deeming usage as ‘a bit of a laugh to pass the time with friends’, whilst another treated the app more interactively, as a ‘competition on who can get the most matches with the most ridiculous profile — a good game for pres’. One app user appears to be treating Tinder as a bucket list, answering that they ‘want to shag someone from every College’. Truly admirable.

Over three quarters of respondents said that if they see friends on dating apps, they match with them as a joke, which is nothing revolutionary. When it came to colliding with acquaintances or distant crushes however, almost half of our survey hamsters found that matching on dating apps granted them with an opportunity to finally (and perhaps less dauntingly) drop a flirty hint. In fact, a hopeful 23.7% confessed to using dating apps with the genuine hope of finding someone long term. 9.3% of respondents admitted to using dating apps purely for casual sex, whilst 7% see swiping as a means for quick digital validation, and 5% as a knee-jerk reaction following a breakup. One absolute legend told us they’re on a dating app for ‘medical reasons’. Ha ha. 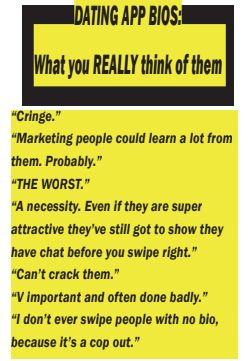 Just 17% of respondents — most of whom were male —­ confidently answered that they send the first message when they receive a match, whereas 42% prefer to decide on an individual basis. When it came to calculating the lengths of their conversations, most respondents opted for a calendric calculation, with 37% answering that their chats lasted for a few days, and no more than a week. 20% of respondents lamented over the sporadic, short lengths of their conversations, admitting that they rarely lasted longer than a few hours — a lonely 6% admitted to having no conversation, or no answers at all…*tumbleweed*.

Those who chose to quantify their answers appeared to have a message limit of around 5-10 before they stopped replying or moved onto another messaging platform to continue the conversation and potentially arrange a date. One respondent was particularly specific and strict about this, adhering to their own ‘12 message rule: you have to ask them out or ask to meet in person within the first twelve messages. Otherwise it just [turns] into an online chat’.

How do Cantabs cope when life imitates the dating app? 60% of respondents admitted that they would immediately dodge a match if they saw them in Sainsbury’s, which dramatically fell to 17% when the surrounding was changed to Cindies. Liquid courage is still as strong as ever — 83% of respondents answered that they would greet their matches in the smoking area. It does also seem that there is an unspoken social etiquette in place when it comes to how and when it is acceptable to approach digital faces in the flesh. There’s no hiding, and absolutely no allure in the bright lights and slippery floors of the dairy aisle. Makes Cindies look like something out of Notting Hill.

Have you ever been on a date with someone you met on a dating app?

Almost seven out of ten of respondents reported that they had been on a date with someone they had met through a dating app, with 60% revealing that they keep in touch with matches or dates in some form and several students admitting that long-term relationships have formed as a result.

The ease of romantic connections powered by the Internet appears to have left us in some sort of awkward limbo however. Over half of our respondents confessed to telling someone how they feel about them online (for instance through messaging platforms or even Crushbridge) — and yet over 80% of those who answered would rather be asked out in person. Breaking news: Cambridge students are awkward and don’t know what they want. When asked how they feel the Internet has altered their romantic relationships at university, many admitted that it is now easier to connect with more people. A handful of students confessed that they now find it easier to stalk their matches or potential suitors online before pursuing anything. One respondent believes that apps have ‘given me quantity, but not necessarily quality’, with the silver lining of ‘sex. Lots of sex’. Efficiency seems to be the top gain for many: ‘I’m actually getting some dick’, one student told us, whilst another finds the Internet has made it easier for these connections to be formed and organised, ‘because everyone is way too busy in this hell hole’. Swings and roundabouts it seems.

We would also like to add that, as an editorial team formed entirely of Arts students, calculators are rather terrifying objects to us. Statistics and numbers only feature in our lives when we are looking at the percentages on the back of the cheapest bottle of wine we can find. This survey was conducted on a self-selecting Google form, which is as accurate as you would expect. So Mathmos: please don’t bite too hard.

If you have any questions about the survey, please contact [email protected]