College Football Round Up – Week 1

All the scores from the CUAFL Premier League.

Welcome to The Tab’s college football round-up. Each week, as well as our selection of detailed match reports, we’ll bring you a taste of what happened elsewhere in the CUAFL Premier League, complete with the current standings.

The defending champions started positively, with Max Burley scoring early on, via a substantial deflection on the way in. Christ’s came back into it though on the stroke of half-time, and probably deserved to be level going in at the break.

In the second half Downing had to show all the passion, grit and determination which had seen them take the title last year, eventually scoring late on. A corner was met by a header from captain Rob Dunn, and the visitors managed to hold on until the final whistle. Both teams can take heart from a strong opening performance.

Amid the customary cries of ‘press’ and ‘straight-in’, the opening passages of play, while of quality, were also condensed and somewhat nervy in the centre of the Selwyn pitch. Up until the 25 minute mark it was anyone’s game, until a disguised shot from a wide-angled free-kick was enough to cause chaos in the Fitzwilliam 6 yard box, and Selwyn striker Chris Hutton capitalised, tapping home from close range.

The onlooker might have been forgiven for thinking the home side would then go on to take control, but Fitz responded superbly. A fantastic piece of passing play- initiated from the back and delicately swept into the final third- was finished with aplomb by Fitz’s forward, Ermgassen, to level the scores.

Minutes later, Selwyn were left to rue a host of unbelievably missed chances, as a penetrating through ball, met and hit early- Shearer-esque- by James Rhodes (living up to Tab billing as Fitzwilliam’s Star-man for this season), made it 2-1 to the visitors. The comeback wasn’t complete either; Rhodes was in the mood and doubled his tally with a lovely glancing header, to give the boys from Fitz a third.

It was a game of goals and outrageously missed opportunities, as further efforts, firstly from the Fitz captain Bogle and then a second from Ermgassen- a delightful curling finish- made it 5, while Selwyn could seemingly do everything but score, amassing a number of fruitless goalmouth scrambles and shots against the woodwork.

The hosts were truly in sixes and sevens as yet another two Fitzwilliam goals, of particular note a crisp volley from mercurial wideman Medhi Golozar, flew into the net. A late Selwyn second was scant consolation for a sheer capitulation. Final Score: 7-2.

Kings began life in Division 1 with a 4-1 win at home to Emma. Two goals apiece from strikers Kert Putsepp and Mark Schiebler were enough to seal victory for the men in purple.

The game began in frantic style, and Kings took just 3 minutes to get off the mark for the season, with last season’s top scorer, Putsepp, opening his account in superb fashion. Picking up the ball half-way inside the Emma half, he used his pace to beat three men down the left-hand side, before dipping inside and arrowing a shot into the far corner past the helpless Alex Botu.

Emma, however, hit back almost immediately with a long throw proving Kings’s undoing. The ball was launched into the box, and Anton Dennis was on hand to tap home after a near post flick-on.

The rest of the first half was contested strongly with Kings shading possession and the better chances. Putsepp, had a one-on-one which was well saved, while at the other end, Dennis drew the best from keeper Harry Ragan. It took a fine one-touch passing move from Kings for them to regain the lead, culminating in Schiebler finishing well to give the side a, just about, deserved lead going in to the break.

The second half began as the first ended. Kings sought to control the game, helped in part by a disciplined display from the back four and workmanlike shifts from the centre of midfield. Putsepp soon increased their advantage, tapping home after a long free-kick was spilled by Botu. Kings continued to have the better of the chances, and Putsepp had further chances to complete his hat-trick, but found Botu blocking his way. With the final kick of the game, Schiebler finished calmly to seal victory and give Kings a winning start to the season.

These two stalwarts of the top flight played out a hard-fought draw, with Jesus’ Nial Purcell cancelling out a Nikos Yerolemou

free-kick. You can read a full match report HERE.

New-boys Queens’ fought hard, but had neither the style or the substance to hold out big boys Homerton. You can read a full match report HERE 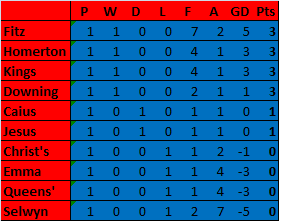 We’re back and better than ever

Forget Colin vs Cuthbert. This is Colin vs Carl vs Clyde vs Curly vs Charlie vs Wiggles

The group of students has already raised £20,000 for their cause

Any mention of Toope and your cover is blown

Top-notch tunes: We asked Cambridge students what music they listen to for studying

As Shakespeare wrote: ‘If music be the food of studying, play on’

He aims to use the role to make Cambridge ‘a more dynamic, progressive and supportive place’

YCA Week One: Diving Back In

Left out of groupchats, worried about accom, dating someone struggling with their mental health, and much more!

Your College Aunts: Back and Better Than Ever

Clare College refuses to pay £3,000 compensation to a student it wrongly suspended

Chanel announces sustainability partnership with the University of Cambridge

During the three-year partnership, Chanel looks to draw on ‘expertise’ from across the University to ‘accelerate sustainable innovation’ at the company

Finger’s crossed that you don’t have to use it!