Jack and Dani from Love Island 2018 have broken up

This time it’s for real

Jack Fincham and Dani Dyer, winners of Love Island 2018, have officially broken up. So that's it, there are no more couples from series four still together.

Jack announced their split on his Instagram story. He said: "There is no easy way to say this and it isn't going to be an easy time but me and Dani are not in a relationship anymore. We will always care a lot for each other and have love for each other and I mean that from the bottom of my heart and I wish her nothing but happiness.

"We have some amazing memories together and have been through a lot but sometimes things aren't meant to be and we really did try to make it work but it unfortunately didn't and that's life. That's all I have to say, a break up is hard enough as it is for both of us let alone in the public eye so I hope everyone is considerate and understands this." 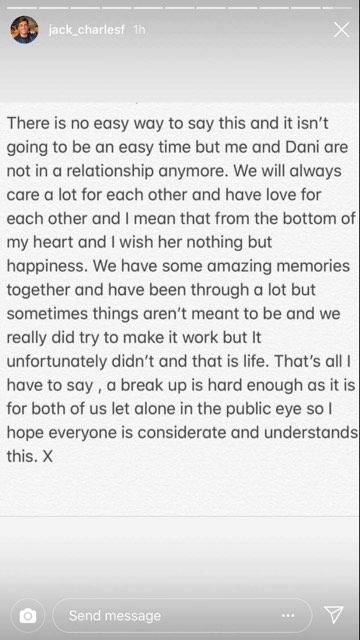 This isn't the first time the couple have "split". They broke up back in December, but this was all rumoured to be a publicity stunt, and within days they announced they were back together. Jack and Dani then spoke about what happened when they "split" in their reality show, Jack & Dani: Life After Love Island, where Dani said it was all a mistake and she had "fucked up".

But this time, it looks like it's for real, and that means no more Love Island 2018 couples are still together. They are the ninth and final couple to break up, after Samira and Frankie, Laura and Paul, new Jack and Laura, Charlie and Ellie, Georgia and Sam, Megan and Wes, Josh and Kaz and Adam and Zara.