On the 9th of November, sixteen teams ( and over 200 players) from Ireland, Scotland, England and Wales gathered in Oxford for the first ever British Quidditch Cup. Among them, the St Andrews Snidgets, an unknown quantity in the Quidditch world, stepping up to the plate to represent The Bubble in this seminal competition. They did not disappoint.

Some of you might remember an article on the Stand introducing you to the basics of the sport. Muggle Quidditch was adapted from the Harry Potter books by a group of students at the University of Middlebury, Vermont in 2005. It is a mix of rugby, dodgeball, handball and tag, entirely played with a broom between your legs. A team has to include at least two players who identify with a different gender than their teammates and it is full contact. Each team counts three Chasers who attempt to score with the quaffle through the hoops (one goal is worth 10 points), a Keeper, two Beaters who defend with dodgeballs and a Seeker in charge of grabbing the Snitch, effectively ending the game and earning 30 points for their team. With four balls on the pitch at all time, bludgers to send you back to your keeper zone every now and then, and tackles allowed, it is physically demanding and incredibly entertaining as both a spectator sport and for the players.

At the British Quidditch Cup, St Andrews were facing teams from Leeds, Reading and Southampton (announced as the dark horse of the tournament) in pool play. After a first match with Leeds, lost by a superb catch of the snitch (although I should point out this was caught by the seeker’s hands, and not his mouth), the Snidgets found themselves against the dark horse Southampton. Some sources called this the game of the weekend, with St Andrews forcing the match into overtime against the team that would eventually rank fourth of the tournament. Sadly, a last ditch snitch grab by Southampton sent St Andrews out of the competition.

The Snidgets still had pride to play for, however; the last match of pool play, against Reading, was dominated by the Scottish team. They scored nine times without conceding a single goal, placing third in their pool after two very close defeats. So, although St Andrews had not qualified for the main bracket, they entered day two raring to go in the lower bracket with everything still to play for. 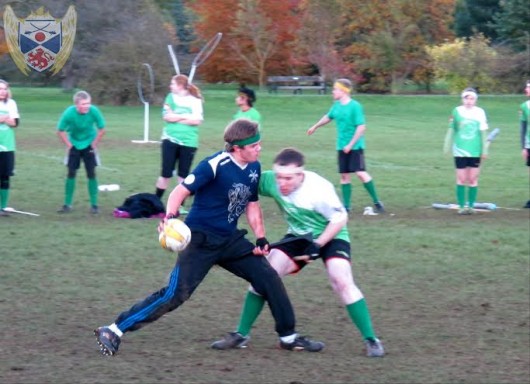 The physical side of quidditch

The team won every match, ranking 9th in the final and finishing the weekend with four wins out of six. As for the main bracket, it was dominated by the three best established teams in the UK: Oxford, Keele and Bangor. Each demonstrated impressive skills and it was a pleasure to watch these experienced players show off their talent. Oxford managed to extend their record of having won every UK based competition with another fine weekend of quidditch enjoyed by all present.

The weekend has proven that quidditch in the UK is on the rise, with teams such as Southampton, Nottingham and Leicester becoming contenders for future tournaments. It has also shown how close the entire quidditch community is; when teams were not on the pitch, it felt like Oxford was hosting a giant family reunion. After all, we’re a bunch of people tackling each other while running with a broom between our legs; if that does not bring us together, what possibly can?

Moreover, this competition made the world take notice of this fledgling Scottish side. Since the BQC, St Andrews snidgets ranked 6th in the UK by the leading (and only) Quidditch analyst.

The Snidgets played well for their first large scale tournament and are looking forwards to their next competition. In the meantime, training sessions are held every Wednesday, on the North Haugh, between 2 and 4pm. This is a sport still in its infancy in St Andrews. Now is the time to join.

To keep up to date with the Snidgets and their achievements, you can like their Facebook page