A University of Sheffield student was referred to counselling after striking lecturers complained that his lack of support for them was a “welfare concern”.

Thomas Woollard, a third-year history student, was urged to visit mental health services by striking staff and asked “are you OK” – after he tweeted eight times voicing disagreement.

Members of the University and College Union (UCU) walked out for eight days in November 2019 in a row over pensions and pay, bringing huge upheaval to lectures, exams and essay deadlines at 60 universities.

The 21-year-old, from Warwickshire, is now demanding an apology over the “free speech assault” and considering a formal complaint.

The affair began when Woollard wrote light-hearted tweets in reply to pro-strike posts on the @SheffieldUCU account. In one, he asked them to “get back in the classroom and start teaching us”.

He also raised concern with striking staff after witnessing them confronting a student for crossing the picket line.

It prompted the branch committee to contact Susan Bridgeford, head of student support services, and the head of history, complaining that given the “vast majority” supported them, his dissent was a “welfare concern”.

In an email, seen by The Tab Sheffield, the striking lecturers said: “We wanted to write to express concerns about a student…who has come to see us in the UCU office this morning. He was very agitated, anxious and angry and complained about our picket on the Diamond, which he said was intimidating.”

“We became aware that the same student was on Monday tweeting at the UCU branch account very negatively. He appears to have since deleted his tweets.”

They added: “He seems to be angry about the strike in a way that we are not accustomed to hearing from students, the vast majority of whom appear either supportive or resigned, and his demeanour was such that we have concerns for his welfare.” 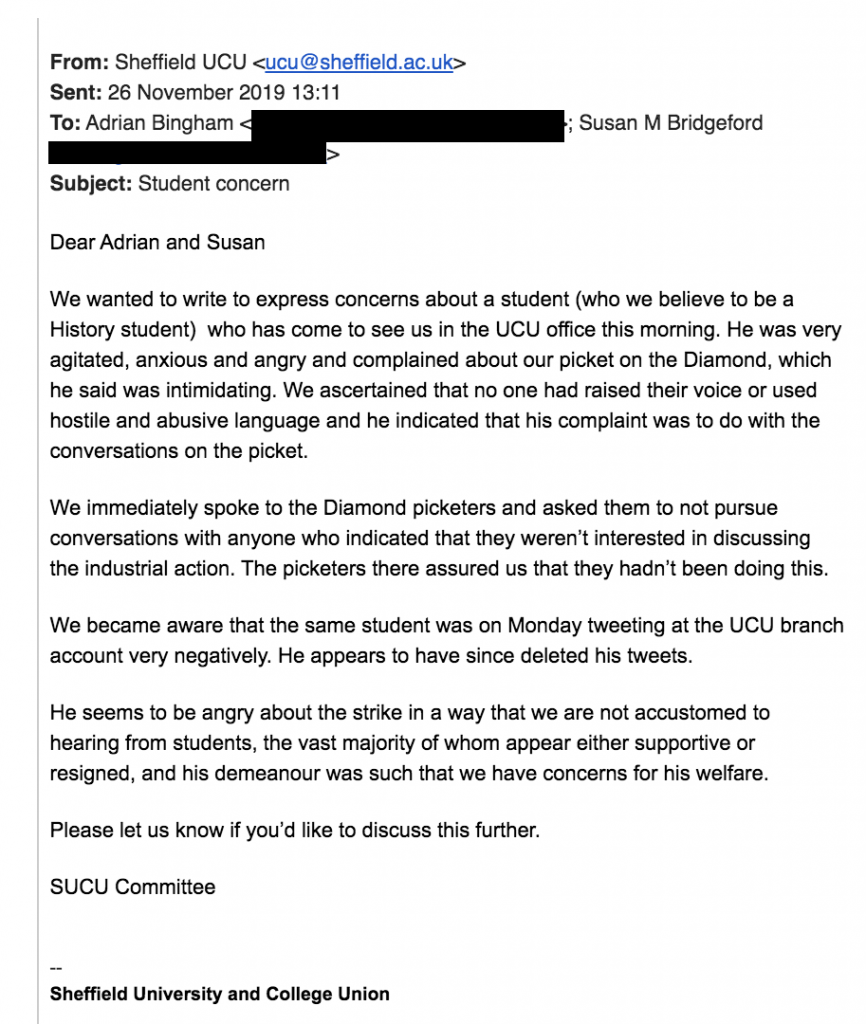 The email that Sheffield’s UCU branch sent to Thomas Woollard

The following day he received an email from a support officer at Central Welfare and Guidance (CWAG) team, one of three mental health services at the uni, “to see if you are OK” after being flagged as “distressed”. She asked him to reply and invited him to book an appointment to “have a chat”.

Woollard attended the session, where “psychological support” was discussed, but it left him furious.

“This is a violation of free speech,” he told The Tab Sheffield. “I went with a legitimate concern and they have delegitimised my opinion and me as a person.

“The UCU of all people should be able to cope with disagreement over a strike that saw my degree affected – they’re a union representing academia, which is supposed to facilitate discussion. If they can’t tolerate this and instead refer students for mental health support, doesn’t that show their true colours?”

It comes as another Sheffield student is currently suing the institution for almost £2,000 over teaching time he lost to the strike, as The Tab Sheffield revealed yesterday.