Students told to get to the airport

The University of Sheffield has called exchange students back from Hong Kong "urgently" amid escalating tensions between pro-democracy protesters and police.

All 15 Sheffield students on a year abroad in the region have been urged to "leave Hong Kong as soon as possible".

But one exchange student currently studying in HK has told The Tab Sheffield that most want to stay, not return to Britain.

Uprisings by Hong Kong citizens against the Chinese mainland have raged into their sixth month, with protesters claiming the Beijing regime is eroding their independence.

The Global Opportunities team have sent an email to students, seen by The Tab Sheffield, with the headline "Urgent: Update regarding Hong Kong" advising them to make travel plans and get to the airport.

It says: "Following our conversations with you over the last few days and the continuing uncertainty in Hong Kong, we have assessed the situation and recommend that you leave Hong Kong as soon as possible."

It adds that third semester of teaching has been cancelled.

Urvi Boolaky, who is studying at City University of Hong Kong on exchange from her Sheffield Uni politics course, said it was "really upsetting" and fears she may not be allowed back. 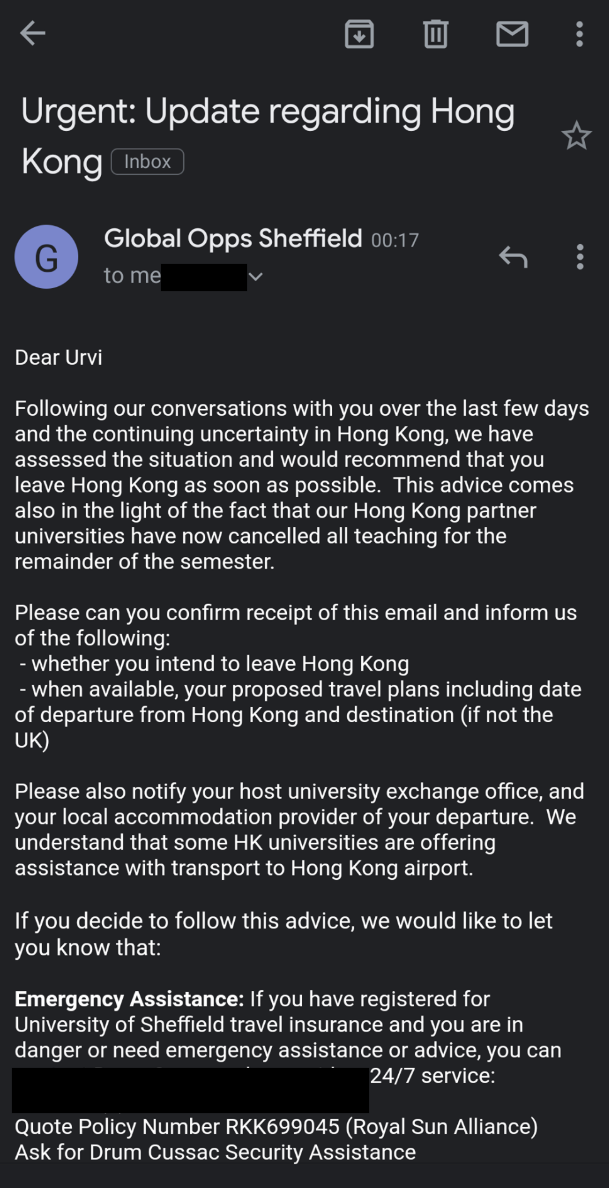 She told The Tab Sheffield: "I genuinely feel safe and I want to stay as long as possible. I know returning back for semester B is unlikely because of the protests, but they tend to escalate and deescalate quickly so fingers crossed I'll return. It's really upsetting."

She said most international students from Sheffield have already left the city, but "we all want to stay".

The email sent to students also contains emergency contacts for those worried about finance and travel insurance.

Sheffield has been at the centre of Hong Kong protests spreading to British campuses in recent months. Violent scuffles between HK and Chinese students in the city in October saw one student suspended by the Uni of Sheffield International College and issued a police caution.

A University of Sheffield spokesperson told The Tab Sheffield: "Like several universities, we have advised our students studying on exchange programmes in Hong Kong to return to the UK.

"The safety and wellbeing of our students is always our priority and we are in close contact with all 15 students currently in Hong Kong to offer our full support in making travel arrangements if they wish to come home."