Mojo’s: The cheap and cheerful gem of Norwich nightlife

When you’re tired of the LCR, PoW is the only way to go

Us Norwigians are not infamous for very much, other than Colman’s mustard and producing low key celebrities who pretend we don’t exist (yep that’s right, we’re looking at you Stephen Fry). However one thing that Norwich can lay claim to is the infamous Prince of Wales Road.

A quick scan of PoW’s Trip Advisor page will bring up an plethora of scathing reviews such as “an attack on all senses”, “the hell-hole of Norwich”, along with a fair few “AVOID AT ALL COSTS”.

Outsiders seem quite scared of it (and understandably so), but when you’re tired of the LCR, PoW is the only way to go. And nestled right in the heart of this “gauntlet of chavs and lowlife”, is Mojo’s nightclub. 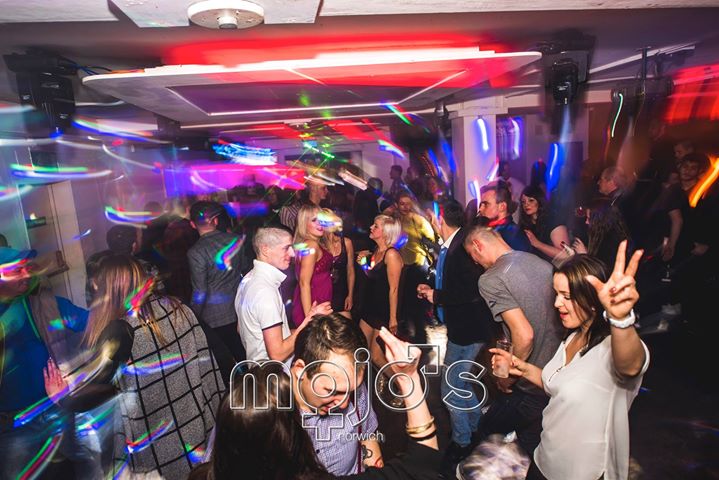 Not even a lumee phonecase will help this lighting

Self-identifying as “The No.1 urban nightclub in Norwich”, Mojos is little more than a glorified hole in the wall. Despite the strategic placing of floor to ceiling mirrors to create the illusion of a bigger space (Laurence Llewelyn Bowen would be proud), the oppressive pokiness of the space is hard to ignore. All the mirrors really manage to accomplish is convincing you that you have a long lost twin at the other end of the bar. Plus no matter how many times you tell yourself it’s just the fluorescent lights, the mirrors act as a constant reminder that you really aren’t quite as ‘on fleek’ as your Instagram followers might believe (oh yeah, I’d forgotten about that drink that was thrown over me at the bar).

But we love it anyway, and here’s why…

After you’ve come to terms with the momentary existential crisis, and realisation that not even the dog filter can help you, you are definitely in need of a drink. So now it’s time to squeeze yourself between the other sweaty bodies to try and get some of the cheapest drinks in Norwich (when they’re served in plastic cups what can you expect?).

20 minutes later and you’re no closer than you were when you started, but then you remember the “secret bar” at the back of the dance floor! So more weaving between dripping people commences, this is the best idea you’ve had all night! And then you get there and realise it is in fact not a secret, it is actually just another bar slightly further away from the entrance, and it is just as busy as the first one. So you man up and wait your turn (but it’s fine, because you can zone out looking at the sparkly rainbows on the imitation marble that tops the bar… is that the same “marble” that tops the units in your mum’s kitchen?) 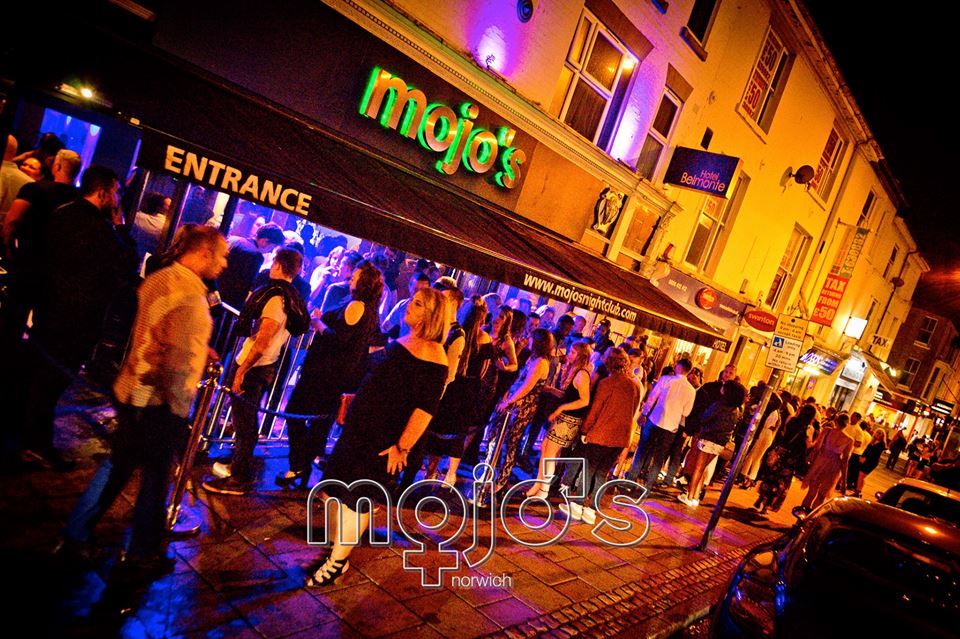 The smoking area/queue/side of the street

Once you’ve finally got your drinks, and shaken your stuff to Drake, it’s time to have a breather outside. By outside we mean the smoking area, which is effectively the railing that separates the club from the pools of bodily fluids that run down the street outside. There are more people crammed between the bi-fold doors and the railing on the street than there are on the dance floor. But hey, at least you can admire the view of everyone queuing outside to have as much fun as you!

Whilst the lack of space may seem like a bad thing to the pessimist amongst us it does mean that it is possible to actually keep track of all of the people that you’ve come out with. After all how hard is it to lose someone on a dance floor the size of Harry Potter’s bedroom?

The cheap drinks and easy entry means that Mojo’s is home to anyone and everyone, and if you take a moment to a moment to pay attention to your peripheral vision, you can really appreciate the multitude of locals that surround you. The dance floor is peppered with true lads; with Aztec sleeves painted onto protein shake fuelled biceps. Snapbacks are free to grind alongside shorts, shirts, and tit tape. Although I wouldn’t recommend looking around too long, as you’ll then begin to notice the collection of middle aged men, nursing cocktails in their Adidas T-Shirts whilst intensely scanning the dance floor (are they actually with anyone?!). 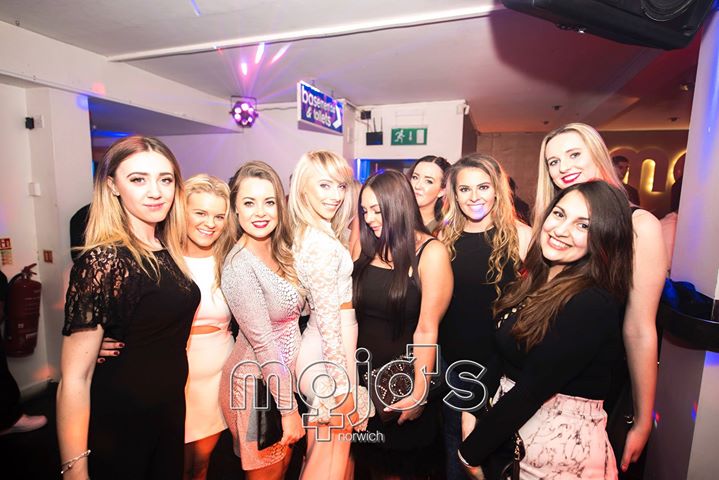 It’s also highly recommended that you don’t put your drink down near any of these individuals (or at all for that matter) for risk of being mine-swept.

One of Mojo’s greatest perks is its loose dress code. The “Smart-Casual” dress code means that anything goes really; caps and trainers are encouraged, so long as they’re clean or at least that’s what’s instructed on the dress code regulations (aka the torn poster blue tacked to the front door).

The real time to take advantage of this is Wednesday Sports Night. It’s 9pm after practice, after a quick swap from leggings to jeans and a couple of shots of jaeger you’re off! “What highlighter are you wearing?” “Erm, well it’s actually just the sheen of sweat from Netball on my cheek bones.” But who’s going to judge? NO ONE! Because you’re in Mojo’s!

It’s also extremely satisfying to leave Mojo’s at 3am in trainers and a sports bra, and facing down all of the Mantra girls, in their 6” heels and miniskirts that looked down their noses at you during the walk down PoW. Who’s the real winner now? Four hours later and we’re both a sweaty mess, yet I can still walk! Looks like I’ll win the manic race across the road to Courtesy Taxi. 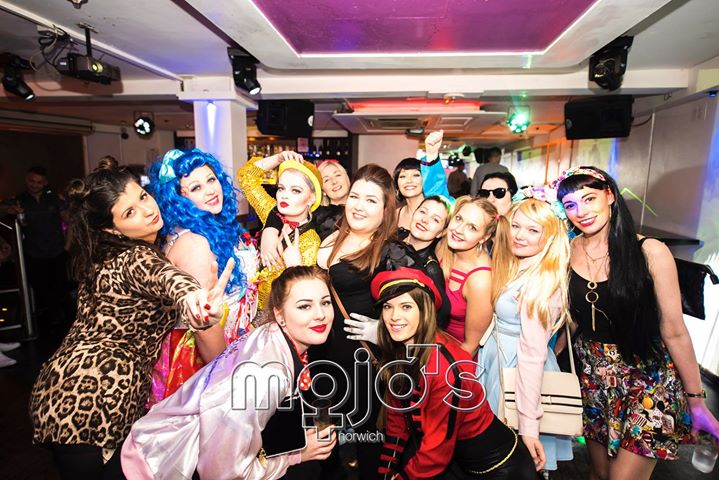 Sparkly jacket and blue wig… Who do you think I’m supposed to be??

But Sports Night isn’t just a chance to wear your gym clothes out clubbing, but It is also hosts some fucking incredible themed nights. Baywatch bar crawl? Yes! Leonardo DiCaprio appreciation night? 100%. Any club that endorses fancy dress on a Wednesday night is something to be celebrated.

There’s no getting away from the fact that Mojo’s is shit. It’s small, dingy, and filled with questionable people doing questionable acts. But you know what? That’s what gives it its charm. It is the sparkling jewel in the centre of the skank-tastic Prince of Wales crown. It’s tacky and we love it.