The first week of graduation ceremonies at UoM were disrupted by student protests pressuring the uni to stop investing in fossil fuels.

Lizzie Haughton, Activities and Development Officer at the SU, was one of the graduates given permission to take over the official Alumni UoM Instagram page, and used the opportunity to fill their feed with pictures promoting Divestment.

Follow the @alumniuom story as Lizzy, our English Language with History of Art graduand takes you through her #UoMGraduation day🎓📷

Organised by People and Planet, the protests took place as part of a six year campaign to get UoM to divest. Currently, UoM invests £7,694,138 in fossil fuel companies, and students aren't happy about it. The graduation protest builds on the pressure applied at a march in November near Whitworth Park. 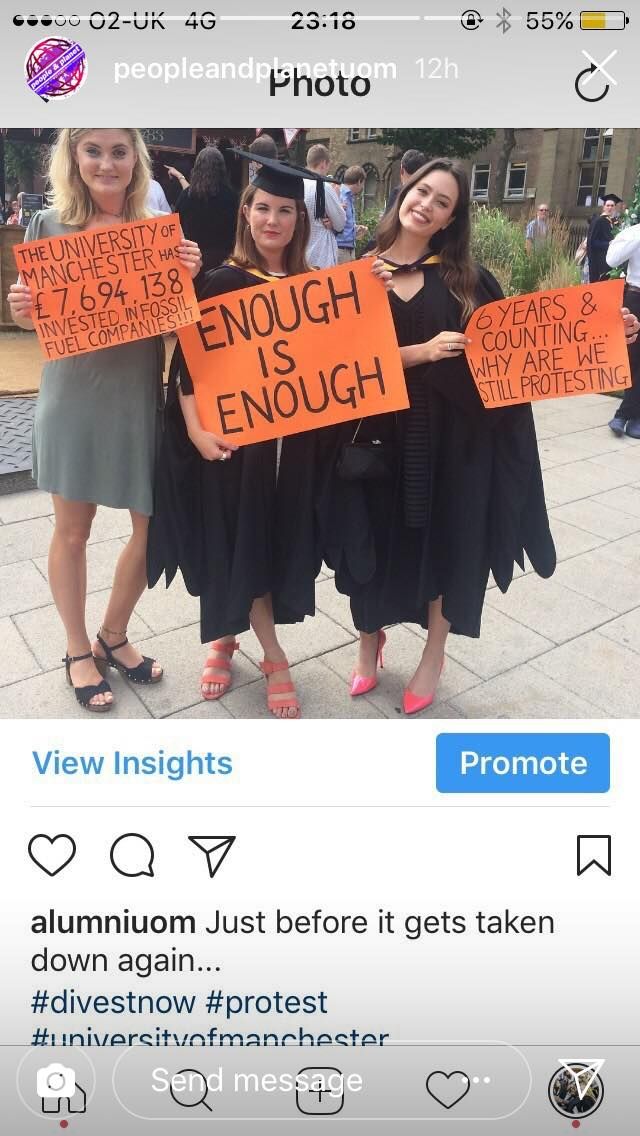 All of the content Lizzie posted was later removed. An anonymous representative from UoM messaged her saying: "Although I very much sympathise with the sentiment of your fossil fuels post, I've chosen to remove it. This wasn't an easy decision, but I hope you'll appreciate it's my job to promote the university." 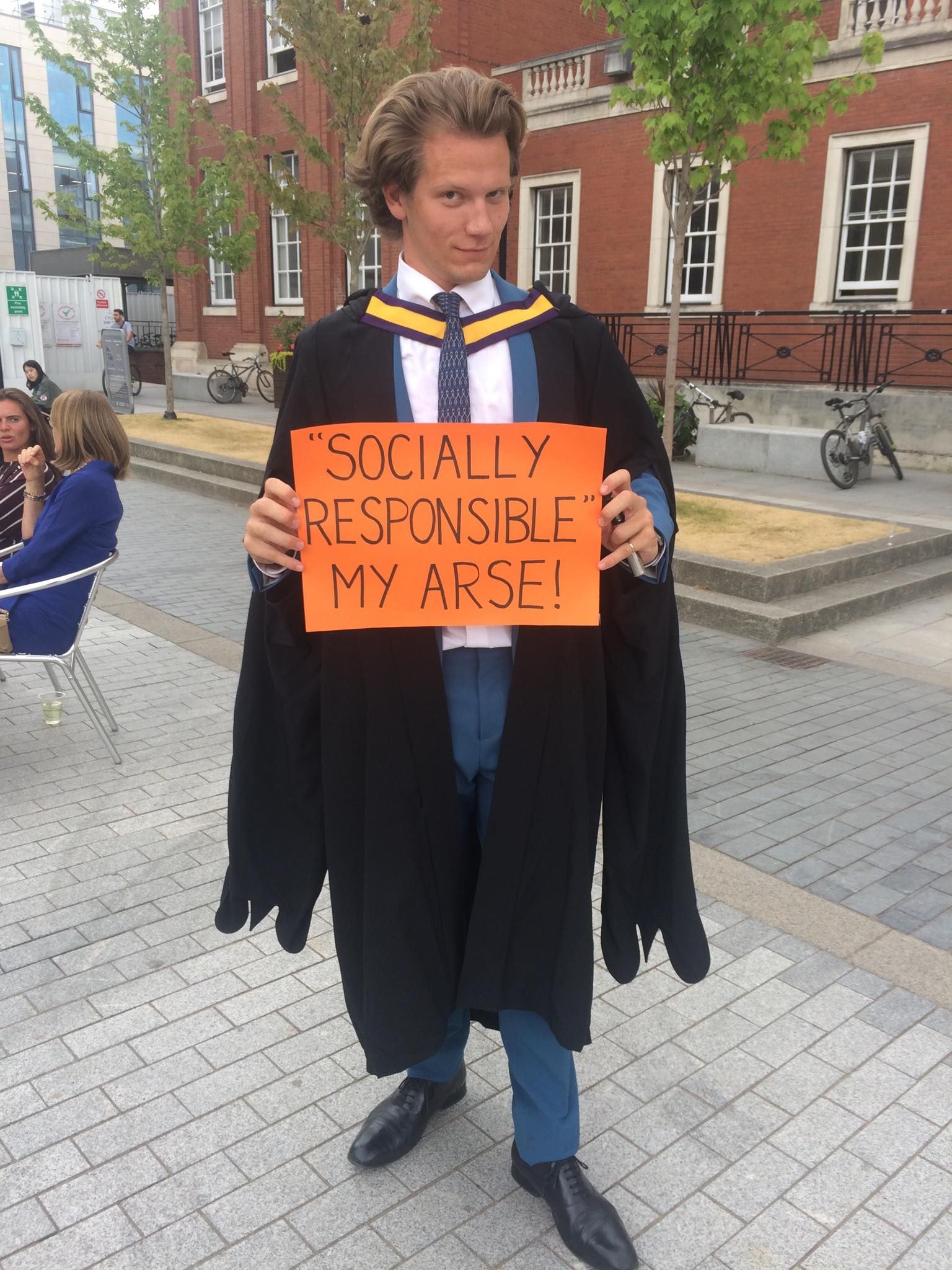 10 graduates across the School of Languages, Arts, and Cultures were involved in the Divest protest.

Speaking to the Tab Manchester, one campaigner Molly Stedman commented: "The University of Manchester proclaims ‘social responsibility’, yet this is not reflected in it's investments. I believe the lack of transparency between what the university proclaims to do and it's real actions is worrying; what else is the university holding behind closed doors?

"This is why I have been involved in the divest campaign during my time at university; and why I strongly hope students do not back down until the university reflects social responsibility in it's actions, not just it's words." 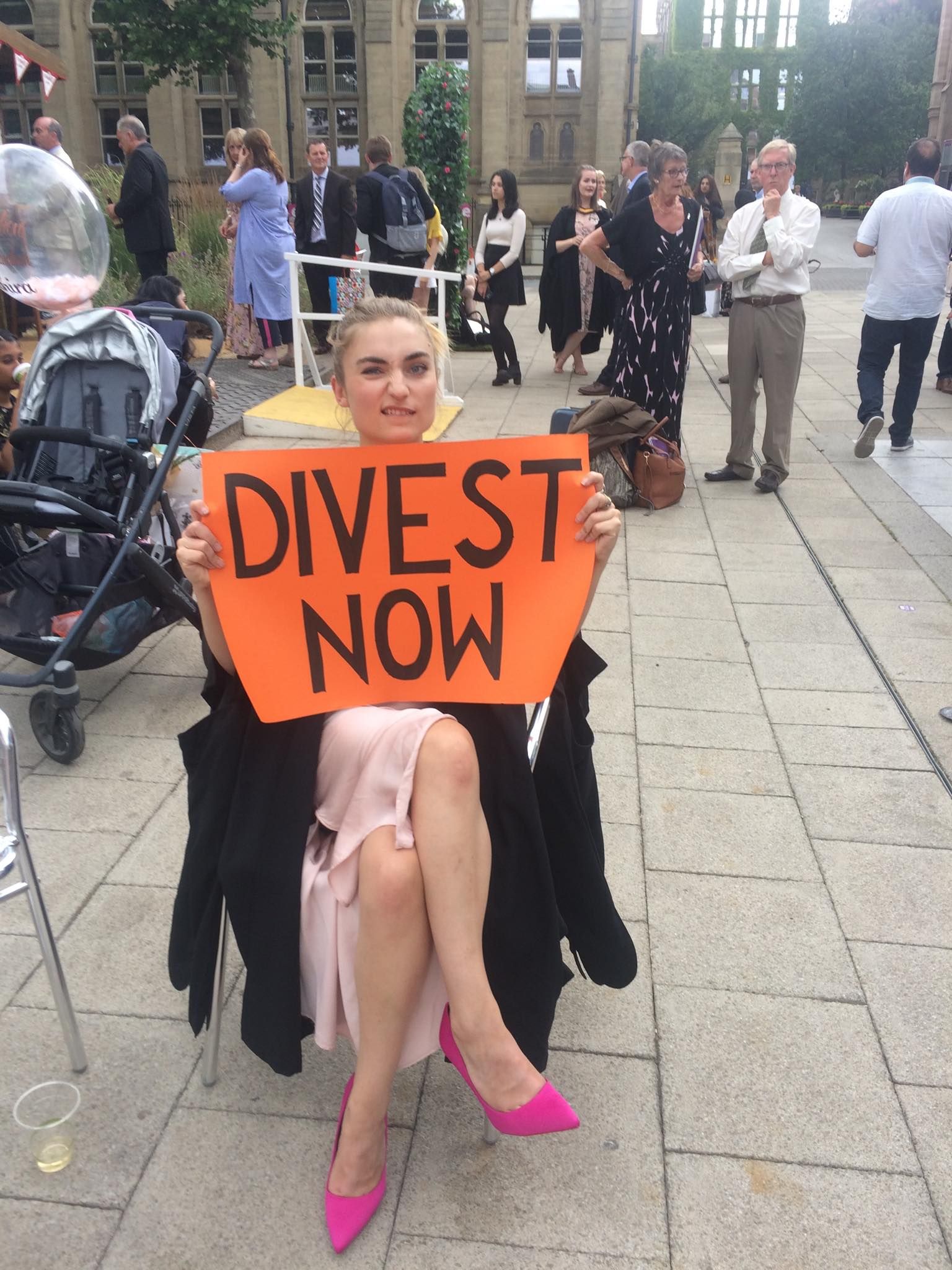 Since 2014, People and Planet have got 69 UK universities to divest from fossil fuel investments. Loughborough is the most recent, becoming the eleventh university this year to divest.

UoM French and Arabic graduate Betsie Lewis also commented: "The University of Manchester has a unique and proud heritage of activism and social justice, however it continues to neglect it's responsibility to the environment. Manchester must follow in the footsteps of other Universities and divest. Historically we've been proud to lead the way for change, and we cannot fail to continue to do so."