Everyone in Fallowfield knows and loves Gaff’s – the go-to shop for almost all of your needs. Whether it’s for your corner shop supplies, vegan-friendly food or cream chargers for your morning coffee, it has been there for students of Manchester since it opened in 1995.

However, Mr Gaff, owner and namesake of Gaff’,  claims that since having been embroiled in a legal battle over the sale of pirated DVD’s, Gaff’s has run into difficulty. Mr Gaff, was allegedly given 11 weeks in jail and a £60,000 fine. He said he managed to pay the fine with help from family and friends, which led to the re-branding as ‘Garden of Vegan’.

In order to pay his loan back and officially re-open as Gaff’s, Mr Gaff told me that he is selling t-shirts. “We’re a bit like Boohoo.com, but smaller.” 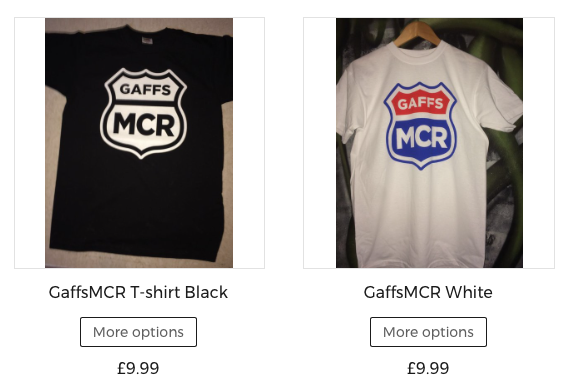 Show your support for Gaff’s with the Route 66 inspired t shirts.

As well as going towards the re-opening of Gaff’s as we knew it, £1 from each t-shirt sale will be donated to the Manchester Arena Victims fund to help those affected by the attack.

I spoke to Mr Gaff, who told me that the t-shirts stand for Gaff’s core values: rebellion and freedom from the system. He told me about Gaff’s golden days as the Hacienda of shops – when he was able to run the shop for fun, selling alcohol and cigarettes at a loss and making up the profit on other items in the shop. Mr Gaff did this as a protest against the establishment and to make these goods more affordable for the everyday student.

Mr Gaff is very hopeful that the t-shirt sales will help him re-open his shop so that he can continue doing what he loves best. He told The Tab, “Life should be a party all the time, have as much fun as possible. We’re only visitors on this planet Earth.”

You can buy the t-shirts from Mr Gaff himself in-store, upstairs in Garden of Vegan for only £9.99, or order online here. Let’s rally together and keep Gaff’s alive.