The cafe is in New Era Housing Estate in Hackney, where Russell has led several campaigns.

We managed to work our way into the crowd and meet some of the supporters excited by Russell’s new venture, and the political revolution he hopes to ignite.

We even tried for a brief moment with the man himself.

We tried and failed to get a further word in with the busy star, but in the end really the only question he would answer directly was on his favourite coffee (double espresso, by the way).

Russell occupied himself largely with accommodating many of the members of the local community, obviously familiar faces from previous protests and his work within the estates. 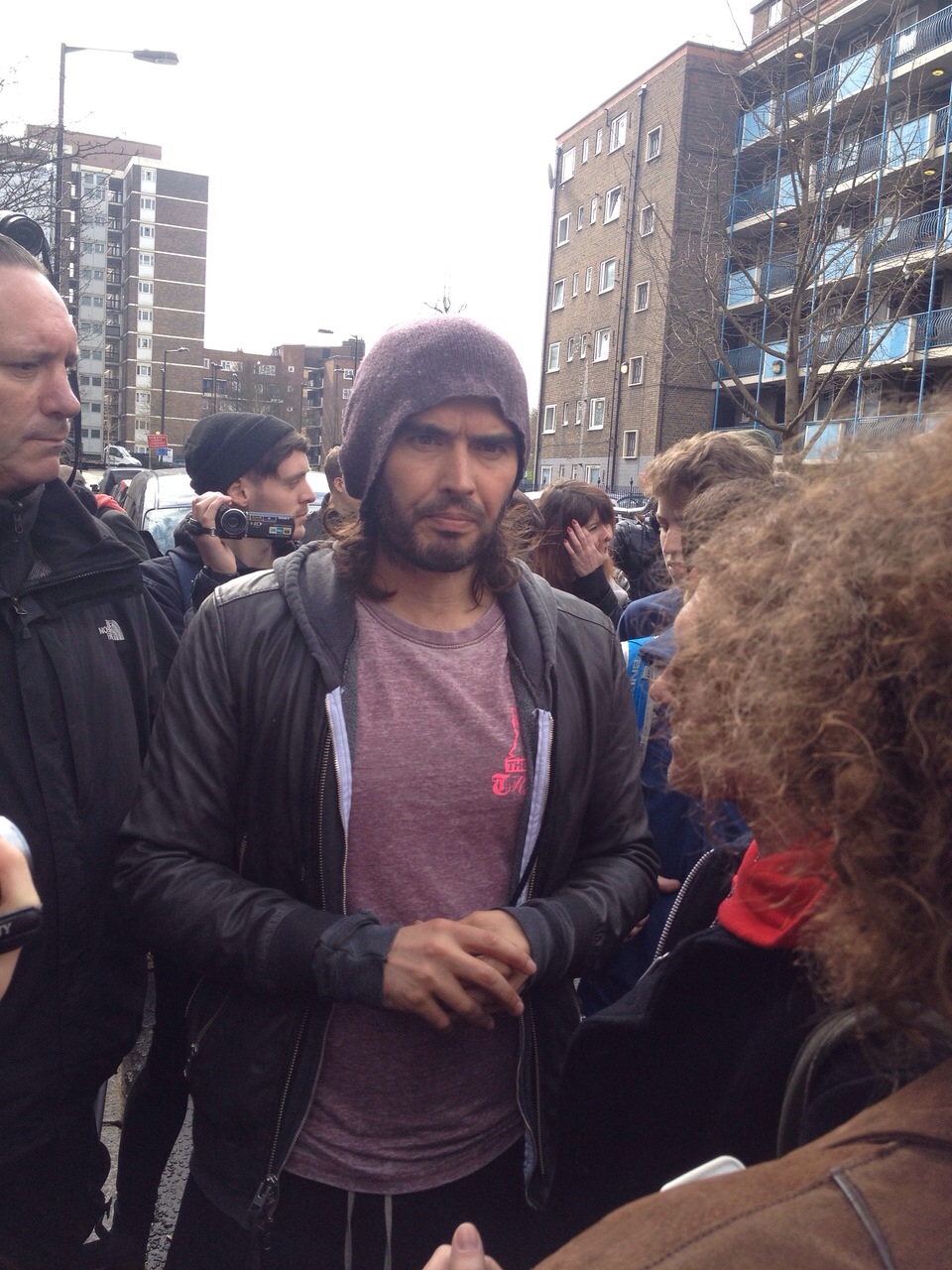 We spoke to one spectator who said that she’d met with Russell many times, most memorably in the “Sleepover” protest in Sweets Way housing estate.

“He’s a genuine guy, and the work he’s doing for us here is just touching.”

Parked outside was the “Kindness Offensive” bus, designed to hold the overspill from the heaving coffee shop.

On the upper deck of the bus free toys were given to children as part of their ‘random act of kindness’ scheme.

Apparently Russell stumbled across the HQ cycling in Camden, and personally asked them to collaborate. Aside from this appearance, their work focuses its generosity within London hospitals, prisons, and foster homes. 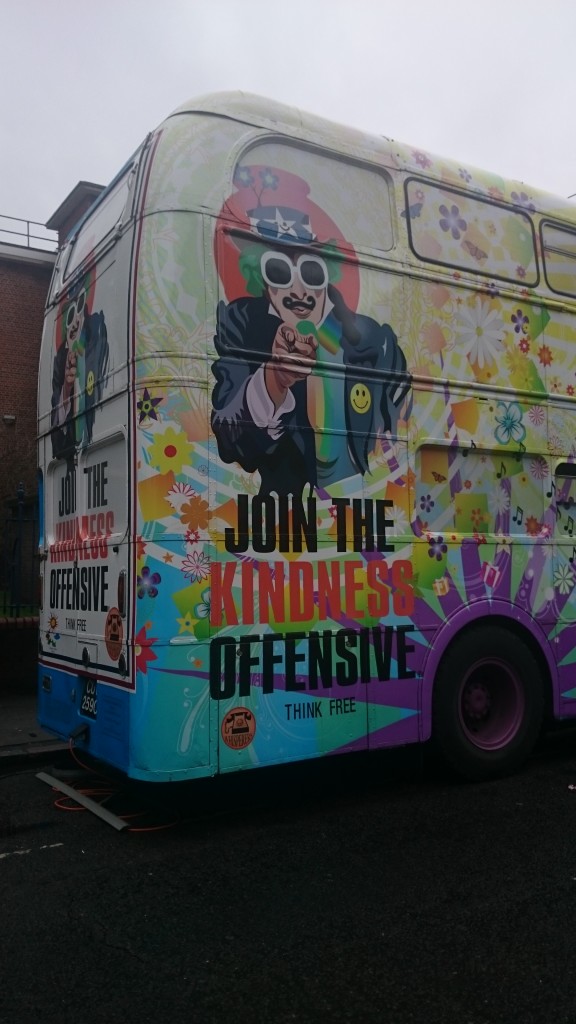 Russell kept the ceremony short and sweet, leaving with some final inspirational words where he spoke of the “genuine hope, inspired by the people who’ve taken back their own lives.”

It was pretty punchy actually, there was a pleasing lack of thesaurus abuse. It even compelled us to muscle our way inside. We were pleasantly greeted by the shop’s employees, somehow effortlessly handling the Russell Mania that escalated so quickly from set up only 4 weeks ago, culminating in Brand’s ‘smashing the doors in’ at 11am this morning.

The shop itself was edgy, cool and distinctly East-end. The menu featured the surely deliberately misspelt “cappaccinos” – £1.80, if you’re wondering. 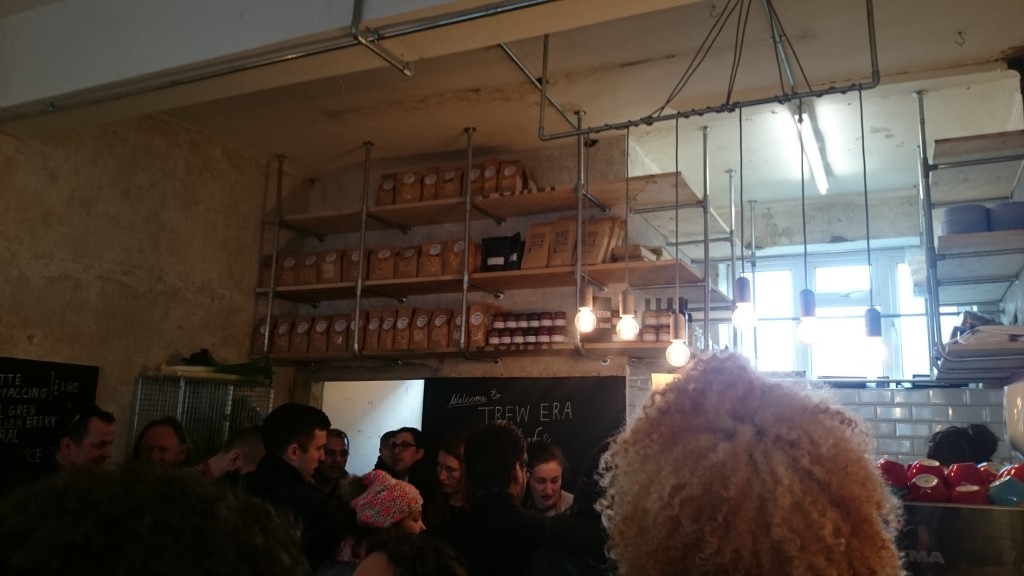 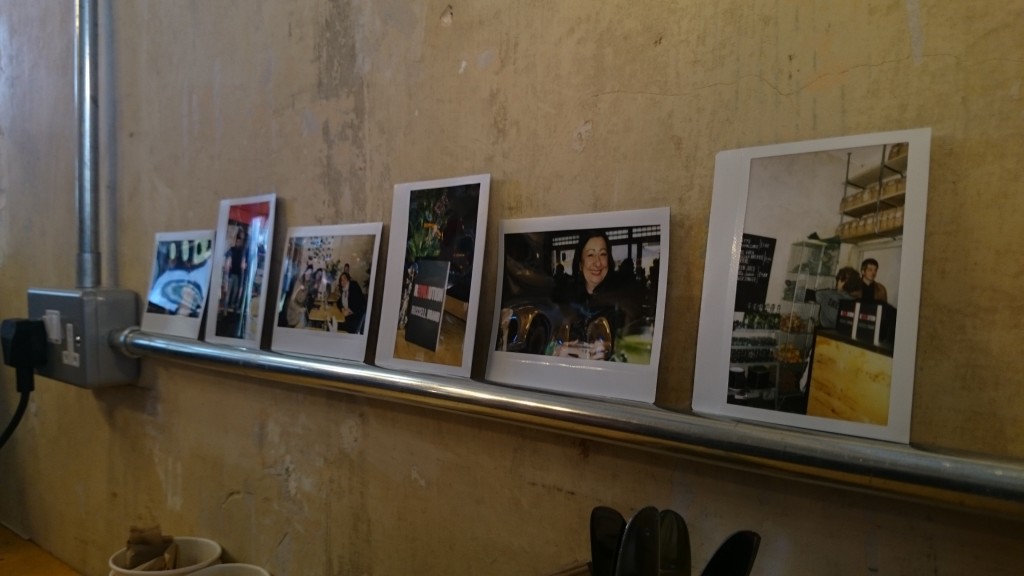 Once Russell had paid his dues, the crowds dispersed enough that we could buy ourselves a Green Smoothie. The atmosphere was buzzing but the smoothie was pretty disgusting.

We went to Mcdonalds and washed it down with a coke.