In the third installment of our look at Liverpool’s pubs, Benedict Spence takes a look at The Philharmonic

Should the morning arrive when you awake and decide to wear tweed suits to university, consigning tracksuits and Topman to the recycling bin (days I refer to as ‘weekdays’) then that fateful day you shall forevermore recall as being the day that you finally grew up and became a man; A manly man, a man who forgoes alcopops and lager for ale and scotch, who discards his lynx and turns to Geo F. Trumper, and who shaves daily with a scimitar taken from a vanquished Turkish adversary on a gap year in Trabzon.

Of course, you will now require a manly drinkery in which to plough your recently matured liver into a midlife crisis and your brain into early onset dementia; a place free of the ‘trendy’, ‘hipster’ lesser beings that overnight have become to you an irritant rather than a potential target for conversation, or a prospective bedfellow. ‘Where does a man like me find such an establishment?’ I hear you howl. Fear not, young silverbacks, for on Hardman street, you shall locate that glorious watering hole you seek so readily, in the form of the Philharmonic dining rooms. 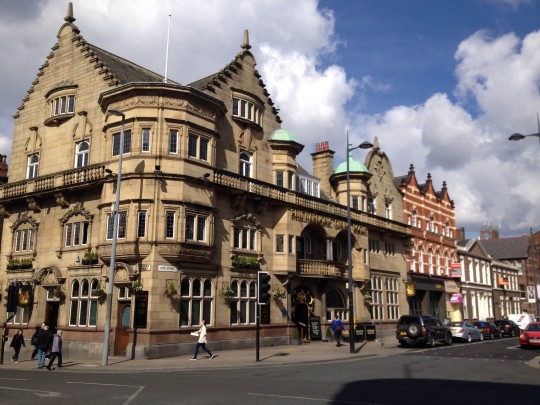 The most beautiful pub in Liverpool?

Financially speaking, the Philharmonic is a place the student should beware; a pint of ale will probably set you back around £3.50 at the very least, and a large white wine for your lady friend (or gentleman suitor be you so inclined) even more so.

The reason for this, however, should be painfully obvious to anyone whose palate remains intact at this stage of their life (granted, given the excessive quantities of paint stripper and cola that is consumed by Liverpool’s ravening hordes on a nightly basis, this is probably an achievement of note) in that the beverages you pay for here are of a substantially better quality than those you find elsewhere.

There is always the chance with rotating ales that you will stumble upon something that possesses all the succulence of Raz juice, but to date the Philharmonic has never disappointed.

The quest for inebriation aside, there are other aspects that students might find unnerving and possibly downright terrifying: when music is played it is at a low volume and tempo; so low indeed, that you can actually converse with those around you. There is but one forlorn fruit machine standing quietly in a corner, in plain sight of all so that those who dare engage it may be judged, and wingback chairs as opposed to bar stools are the order of the day here. 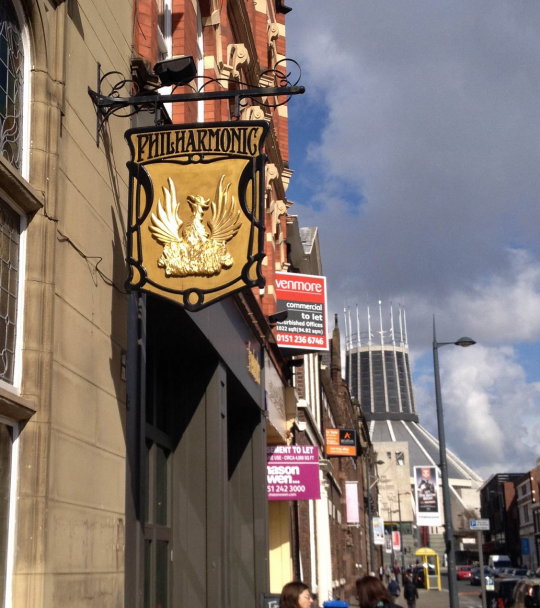 This picture is so bloody #Liverpool.

Don’t be intimidated by the prospect, however, of a stuffy establishment full of fusty old timers, ex-colonels and Merseyside’s last bastion of conservatism; though perhaps closer to the Athenaeum than the AJ in terms of décor, it is a real treat to visit ‘the Phil’, if only just to sit back and bask in the beauty of its interior.

Should the opportunity present itself, it is worth taking up a table or two in the Liszt room, though should you be forced to settle for the Brahms then fear not; it isn’t exactly a Wetherspoons, and you can console yourself with the knowledge that you are still infinitely better than the wankers you’ve left behind in the Font.

Among the 274 establishments in Liverpool bearing the title ‘John Lennon’s favourite…’ this place is part of the city’s heritage; regularly making the lists of top pubs nationwide, and with lavatories so lavish they’re listed. If you get the chance, head on down, and follow the advice of this week’s Withnail quote: ‘We’ll have another pair of pints, and two quadruple whiskeys.’

‘This is before term has even started and campus is quiet’

Here’s what UoL societies are doing for socials this year

Will it really be a year of Zoom calls?

LOST is coming back to Liverpool!

They’re hosting an event next Sunday

‘For a Russell Group uni, Liverpool really needs to step up’

Realisation, meltdowns and not having a plan: Meet the 2020 graduate

You can get fined £3,200 for not wearing a mask on campus

The same goes for hosting or attending a gathering

The new safety measures UoL has for the start of term

They released a video on their Instagram with all the updates

Ugh ruin my shoes and drip sweat on me already

Brb getting a fan to cope with this heat

The incident occurred on Cairns Street at 13:50 yesterday

Baltic darling I have missed you so

Can’t disappoint the parents any more so why not?!

The march started in Upper Parliament Street and ended at St. George’s Hall

The petition got over 1,000 signatures in 24 hours

‘The clouds are literally in the same position in both photographs’

‘It was very powerful’: Thousands gather for Liverpool’s BLM protests

UoL Class of 2020 have graduation ceremony rescheduled to summer 2021

The delayed event will be on-campus, Liverpool has confirmed

‘I’m still waiting for my iPad and my whole wardrobe’

Here’s what UoL societies are doing for socials this year