Because of coronavirus, the incident still hasn’t been resolved

In November 2019, I was made aware that a member of Leeds Beckett Rugby club and someone I had considered a friend, had shared explicit pictures of me with multiple people.

After reporting the incident to the university’s wellbeing team, as well as the police, the issue still remains unresolved and the student that shared my photos has been completely let off. It’s been over six months since I reported the crime, and because of COVID-19, I don’t think it’ll even be dealt with before I graduate this year.

I wanted to share my experience online to raise awareness of what happened to me, and flag up all the ways that I feel let down by how Leeds Beckett have dealt with the situation.

‘He shared them with all his friends’

When I found out that a boy who I trusted enough to send nude photos to had shared them with his rugby team, I broke down. I’d like to think I’m quite a strong person and there is little that can upset me. But when I found out what had happened it was like someone had flipped a switch in me. The hurt and betrayal I felt meant I completely went into a shell, tears after tears every day because I couldn’t believe what had happened. I was actually embarrassed to go into the library because I didn’t know who was involved and who had seen anything. At one point one of my friends actually had to leave work to come check on me because I was having a breakdown. It really felt like my life was spiralling.

It took two and a half weeks to get a response, and finally I had a telephone meeting on the 28th November – more than three weeks after I first reported the incident to the wellbeing team. During the meeting, I explained how I had evidence of the boy admitting that he had shown my photos to his friends, but not sent them around. The officer assured me that even though the boy didn’t send them to his mates, what he did was still illegal. I was told to report the incident and get a crime number. 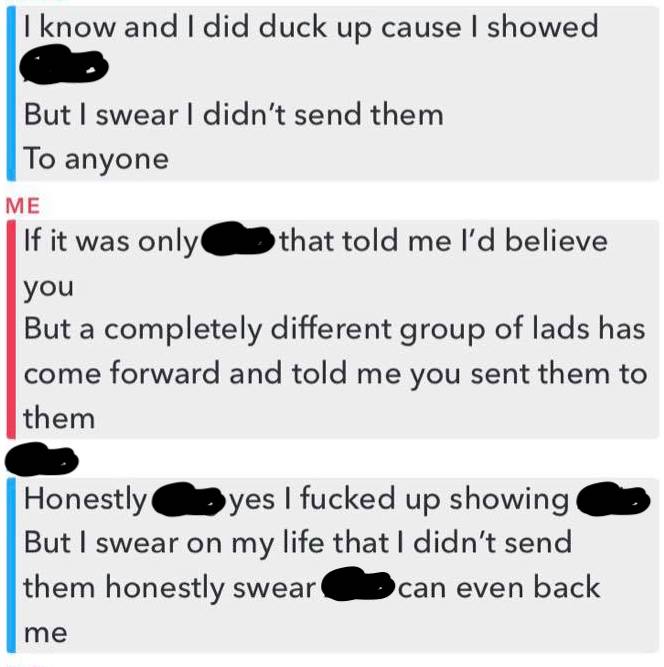 On the 9th December, I went back into the office to make an official statement. Despite previously telling him that I only had evidence of the boy admitting to showing my photos to his friends but not actually sending them around, and him assuring me it was still illegal, the officer told me that my lack of evidence made the case a lot harder to convict.

He told me, however, that he would bring the boy (and anyone else I had named in my statement) in for questioning. On the 19th of December, just two days before the start of the Christmas holidays, I received a call informing me that the officer had decided he wanted to seize the phone, yet he would have to write a lengthy report on why he was using police resources for this incident, justifying how useful these would be in helping the situation.

As far as I was aware at that time, the boy had also been suspended from the rugby club at university – it finally felt like I was getting somewhere.

‘Three months after I reached out to the police, they gave me a crime number’

Over the Christmas holidays, I didn’t hear anything about the case, and then on the 22nd of January, I received a text message from the police asking for the boy’s address. Two weeks after that, I received another message saying that they had gone to the address but there was no answer. They had also left him multiple voice messages on his phone demanding that he contact them, but they had heard nothing back either.

On the 11th February, three months after I originally reached out to the police, I finally received a crime number. I was also told that a meeting had been scheduled at the station a week later. 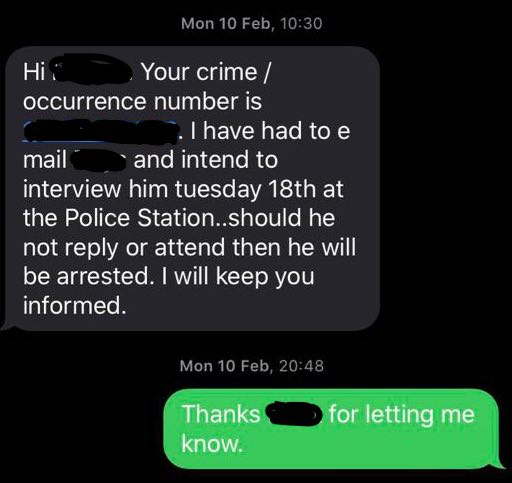 When the boy went to the station, he was only questioned about whether or not he had sent the photo around. Afterwards, the officer told me that he was going to bring him back in for further questioning.

I was infuriated. It had already taken over three months to get to this point, and I couldn’t understand why the officers couldn’t have asked him everything there and then? On top of this, the officer also sent me a link of the different ways of reporting the incident to the university’s Legal and Governance team, even though the police investigation was ongoing and I had previously been told they couldn’t do it at the same time.

It was unclear to me why I had only just been sent these links, especially since I had first reported the incident back in November. It felt too little too late, and like they had hoped I would have got bored by now and dropped the case.

But it wasn’t just the police’s response that I felt let down by. I was also disappointed in how the Leeds Beckett Athletics Union (LBU AU) chose to handle the situation.

As a previous committee member on a sports team at Beckett, I was aware that the AU have a zero-tolerance policy for things like this. I knew that all AU members had to sign a pledge when they joined, while bystander training was also offered to all teams.

When I originally reported the incident in November, the AU said they had suspended him from the club – something I knew was true as his name stopped appearing on the team sheets. However, not once did the union reach out to me to ask if I was okay, despite being fully aware that I had made an official police report.

‘I found out he was only suspended from playing rugby games for one month. It didn’t feel like enough’

When I came back to university in January, his name had appeared on the team sheets again. I reached out to the woman in charge of my case to let her know just how disappointed I was that he had been let back onto the team. She told me that since I hadn’t contacted them in a while, they assumed it had all been resolved.

I was frustrated that I had to email them myself, just to continue his suspension from the club. I also couldn’t understand why they weren’t removing him for good, since all of the rugby coaching staff were aware of what he did. Later I found out that all he got was a one month suspension before he was let back onto the team.

In the weeks after, it felt like the LBU AU were blaming the police for being slow, rather than doing anything about my case. I told them that I believed their response was abhorrent, considering they promoted themselves on having a zero-tolerance policy – I received no response to this.

Coming into February, with my dissertation hand-in just weeks away, I phoned the AU office to express my anger that he was still playing for the club, and had been for weeks. In response, they told me that they believed a one month suspension and a police interview was enough punishment – they told me, “the punishment has to be in proportion with the accusation.” For me, a one month ban was nothing, considering he had committed an illegal crime.

Following this, my course tutor and head of school spoke to the university’s Legal and Governance team to see if they were aware of the ongoing situation. They weren’t – the AU hadn’t even reported it.

This was when I knew they hadn’t taken me seriously all along, and probably never would. I decided to send them an email listing everything they had done wrong and how I felt let down. In response, the Head of Sport at the university asked me to come in for a meeting, however, since the rugby season was now over, he had not missed out on playing any games. A few days later, the university had to shut down because of the outbreak of coronavirus.

UPDATE: We are closing all university buildings apart from halls of residence with immediate effect. This is to comply…

Due to COVID-19, I have now left university with the incident still unresolved, despite reporting it over six months ago in November. The only people that I felt actually took me seriously throughout this, were the staff on my course from the School of Events, Tourism and Hospitality – they fought behind me and I am truly grateful to them for their help.

I was told that the boy involved was mortified with his actions and shaken up by the police interview. However, this article isn’t about him. Instead, it’s about how let down I feel by both the Police, and Leeds Beckett Athletics Union.

The only way this process is going to get better is if more people report these incidents, but for now, I feel broken. I knew reporting what had happened would be tough, but I expected to be supported by the university, not pushed aside.

When I informed the uni I would be speaking about my experience, a spokesperson for Leeds Beckett University said: “Whilst we do not comment on individual cases, Leeds Beckett University takes any allegations of this nature very seriously, and all cases reported through our Zero Tolerance and Student Complaints processes are thoroughly investigated. We encourage any student who has been the victim of any form of sexual harassment or violence to access the wide range of support which is available across the university, including from our student wellbeing team, as well as reporting the issue to the police.”