Thousands of words would be written, hundreds of pages would be read. A whole 24 hours in the library would mean, for the first time, we'd actually finish our week's readings. That's what a library is for, right? WRONG.

To provide us with the sustenance for our 24 hour feat, our first stop: trustworthy Tesco. Stocked up and raring to go we entered the library at exactly 7:45 pm. Excessively heavy overnight bags in hand, we bagged ourselves a booth to dump our things and smash through our work loads. 30 minutes later, we had ordered deliveroo and were midway through a Black Mirror episode. 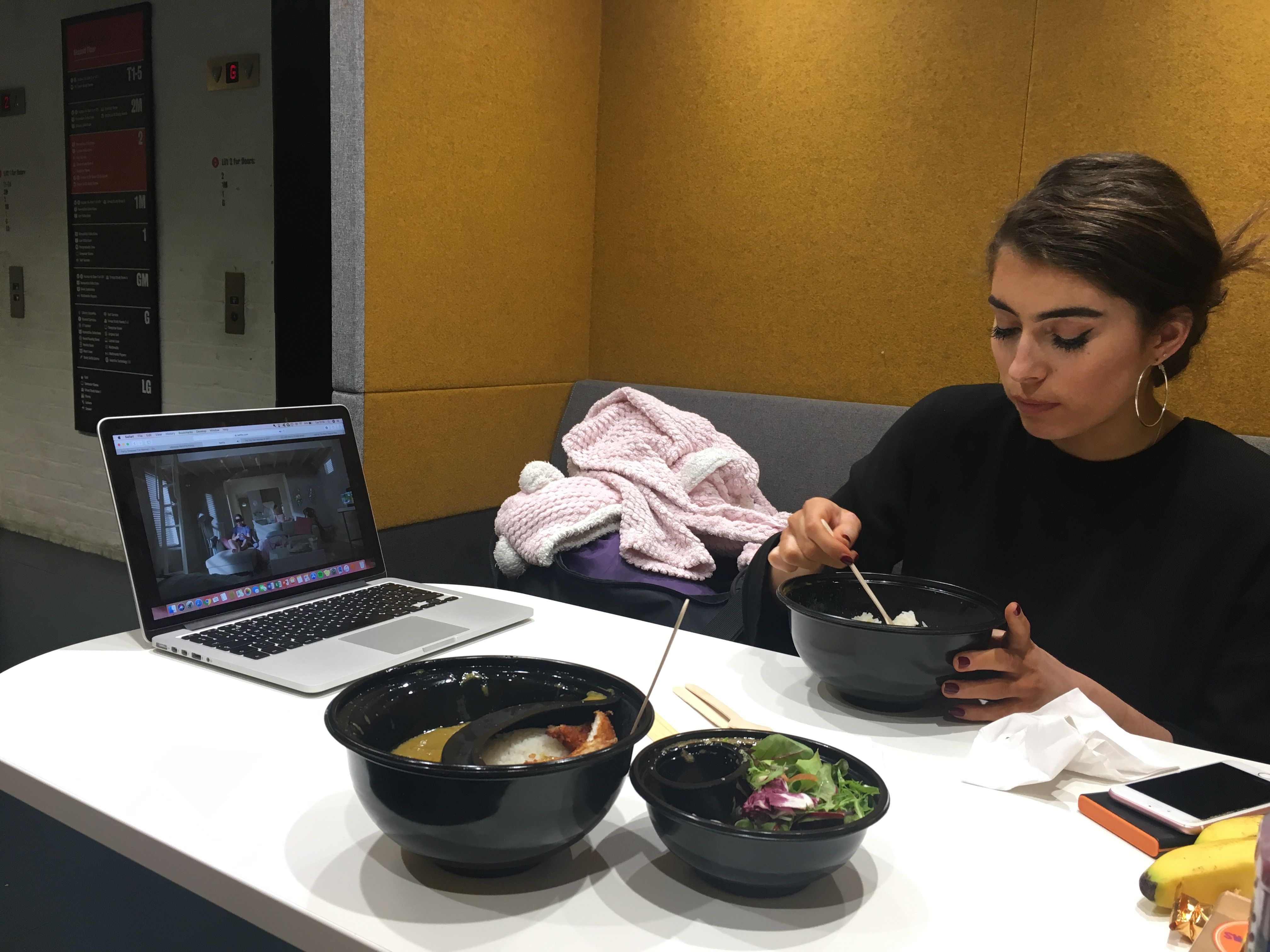 Nosedive is a classic.

Our deliveroo rider was such a babe he came right up to the entrance to hand it over, not one foot was stepped outside of that library. Wags demolished, Black Mirror episode completed, we decided to explore the library. It was all very Ben Stiller/Night at the Museum vibes. Had madness set in at this point, 4 hours into our challenge? Yes, as we next decided to brave the showers.

Down in the basement, behind an unassuming, unlabelled door there they lay. As sinister as it all seemed, the showers were genuinely not that bad. They were warm and fairly clean; we had never felt more comfortable being stark naked in the library. Next, it was time for face masks. We realised we were now having a slumber party in the Maughan… it felt great. 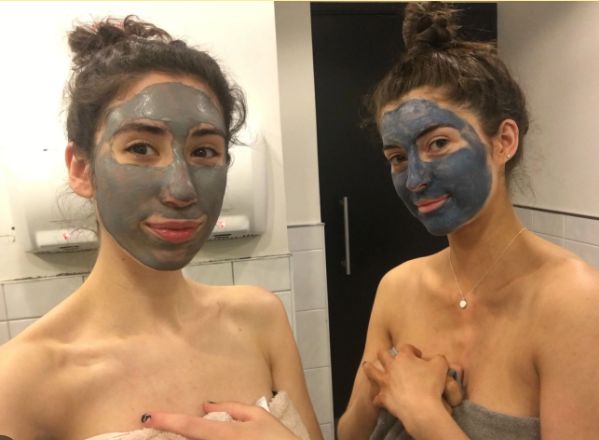 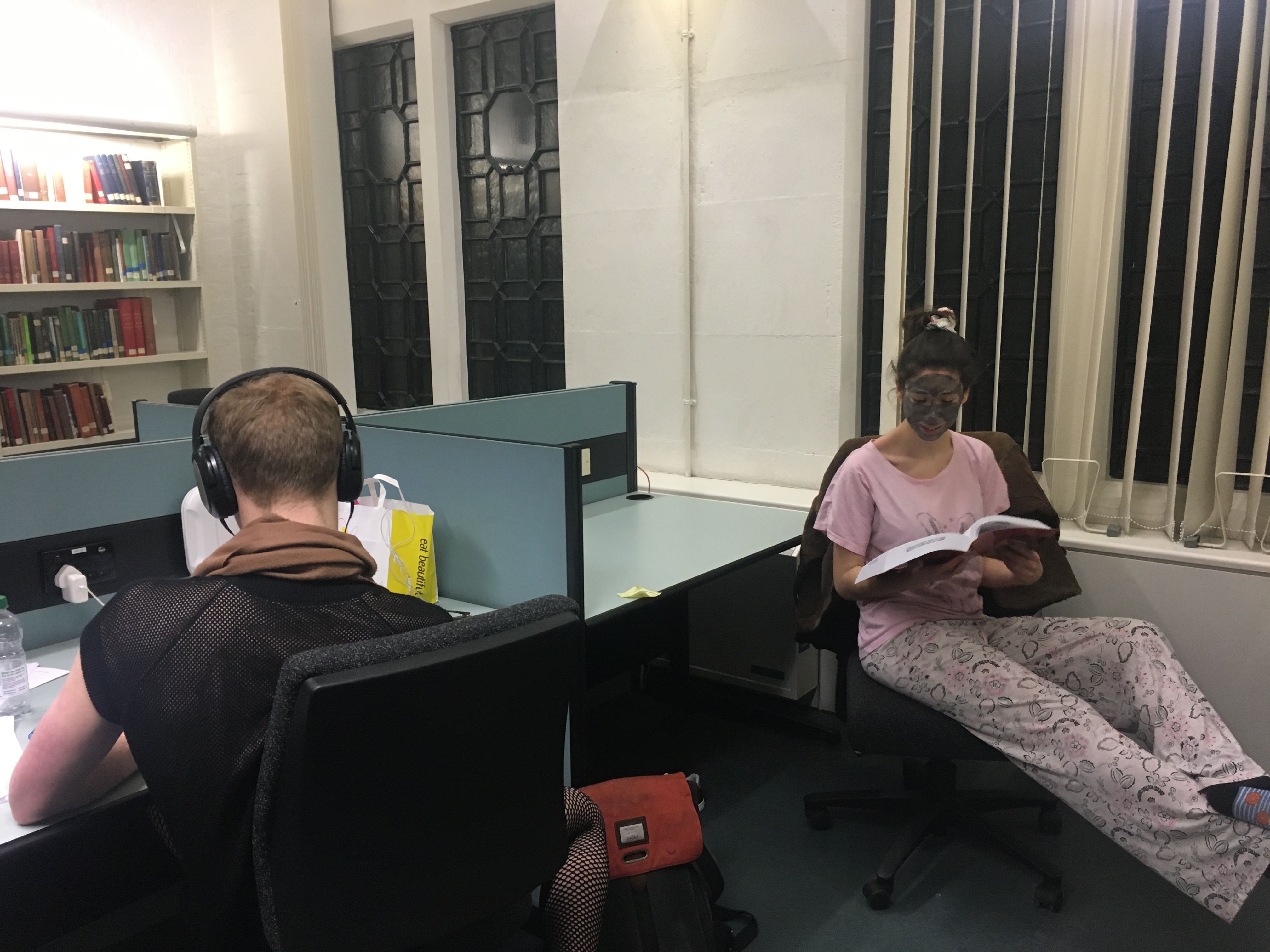 We enjoyed some light bedtime reading, then off we went to the Health and Wellbeing Room were we would set up camp for the night.

We may have been going stir crazy, but we could both forsee that we would have a good night's sleep: the bean bags as our mattresses were surprisingly comfy, the room was warm, and we were content in the fact that we were probably saving on electricity bills at home. With this thought in mind, we drifted to sleep. 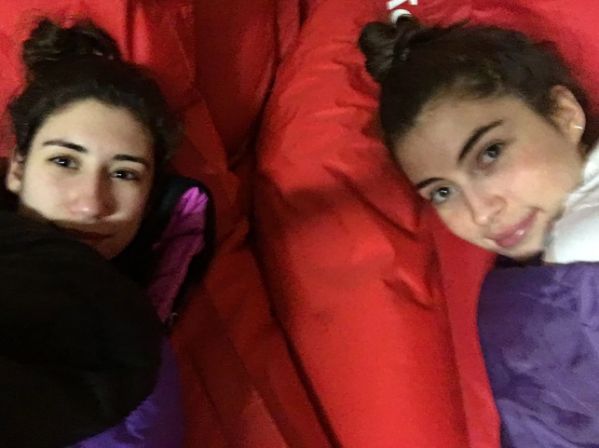 After a night of drifting in and out of sleep on beanbags, we were awoken by the rustling of bin bags around 5:30 am as the cleaner came in. Without any hope of regaining our dignity, we ignored this minor disturbance and returned to a surprisingly deep sleep until 11am. Yep, even lie-ins are possible in the library.

After half an hour of trying to apply makeup we generated at least an illusion of having our lives together. 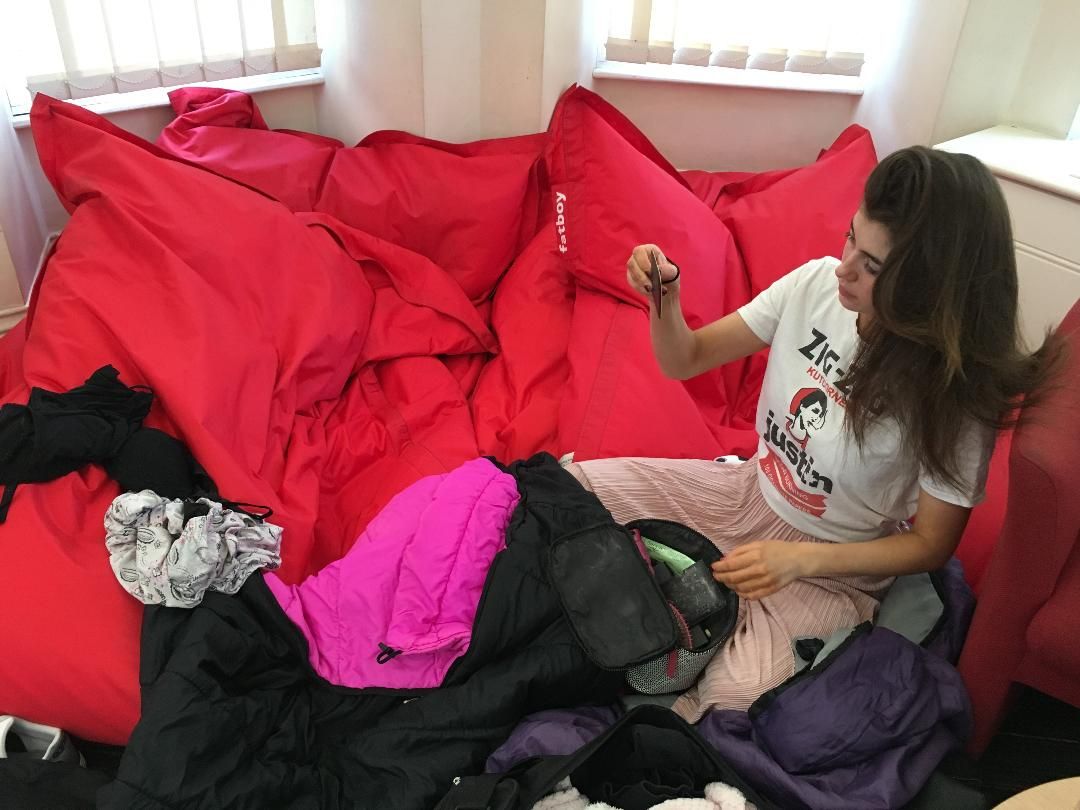 Dressed for a long day of studying, we returned to our designated booth, reserved by the strategic placement of our Tesco meal deals. This was when we encountered a major setback: not only had our reservation been overridden by two imposters, but our supplies for the day had been stolen. Yep, the meal deals were gone.

Now £10 out of pocket and with nothing to eat we were forced to purchase food from Rolls café. With limited food options, we were seriously regretting not bringing microwave meals (and keeping them safe within eyeshot). 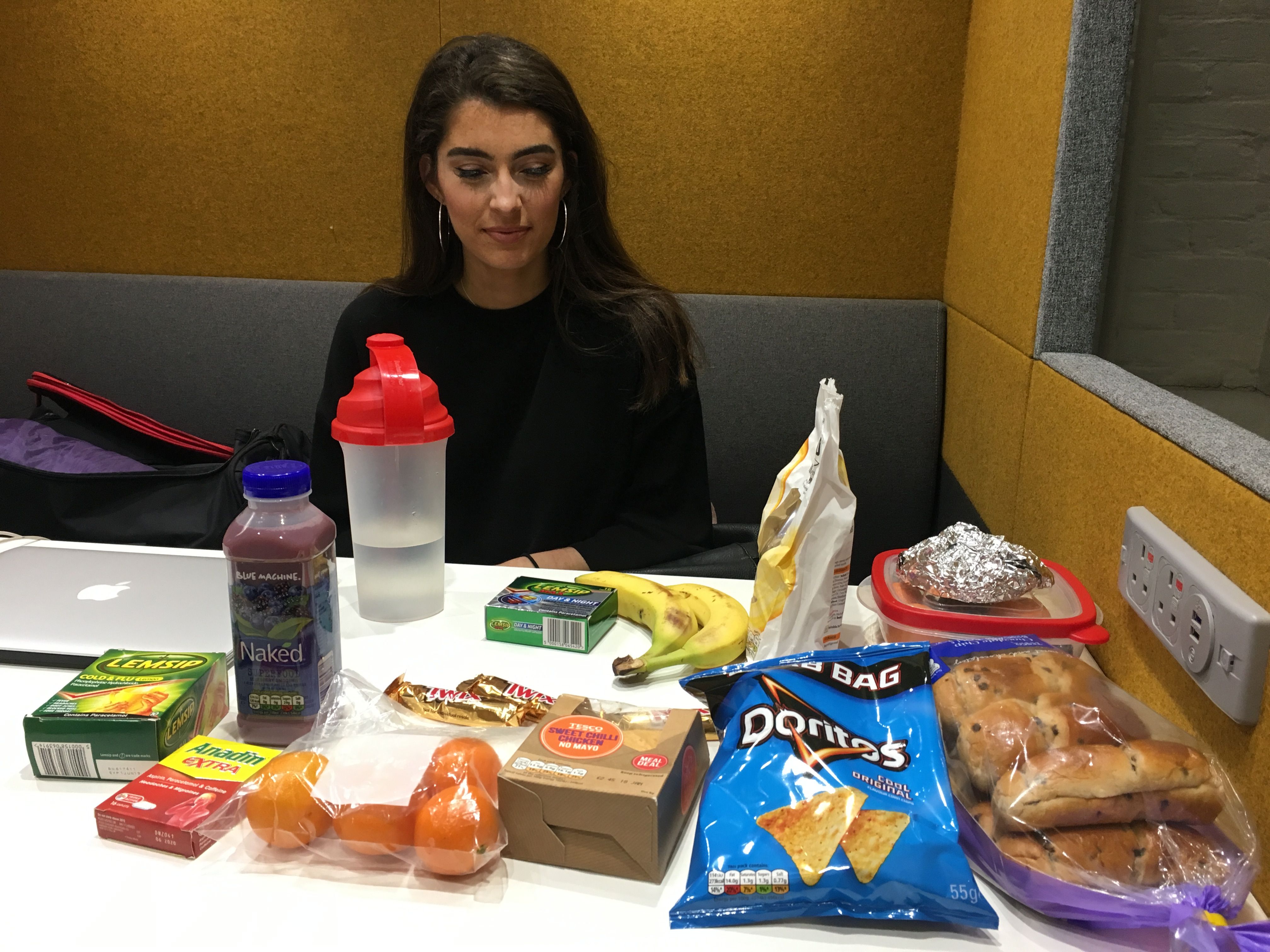 RIP the amount of food we had 🙁

We finally started to do some work around 2 pm… but this was very short-lived after we received a visit from our friend and found ourselves searching for flights to Morocco. The most productive thing we managed to do was write this article.

22 hours in, the end was in sight but a weird case of Stockholm Syndrome meant we were pretty apprehensive about leaving. We might have been hungry and deprived of sunlight, but the library was our home now. There was no world outside of our booth. We would never feel more at home than inside our booth.

7:45 pm rolled around and it was time to head back out into the big wide world – mostly for some proper food. Wondering where 24 hours had actually gone, we begrudgingly realised that we had almost definitely wasted our time. No change there then. 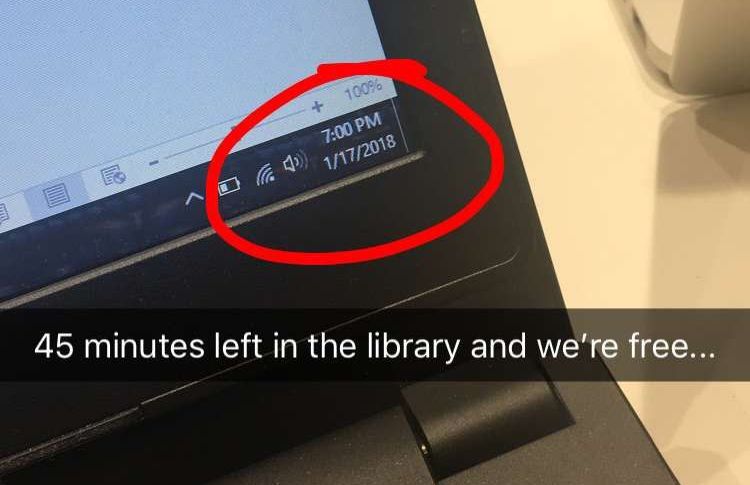 You’d think that spending 24 hours in the library would enable new levels of productivity unbeknown to man, but we actually did much less work than if we’d just stayed at home. The one perk is that living in the library saves valuable money on transport/heating/electricity costs – well, if people don’t steal your food that is.