Everything that happened on the Glasgow Uni ski trip

If, like me, you could never fathom why people pay money to go somewhere freezing cold – with no beaches, bikinis or guaranteed tan anywhere apart from that half inch between your ski goggles and hairline – then this article is for you.

What is the mysterious annual Glasgow Uni ski trip? What goes on out there, deep in the distant snowy mountains? Here is (almost) everything that happened on the 2017 New Year’s trip to Les Deux Alpes. 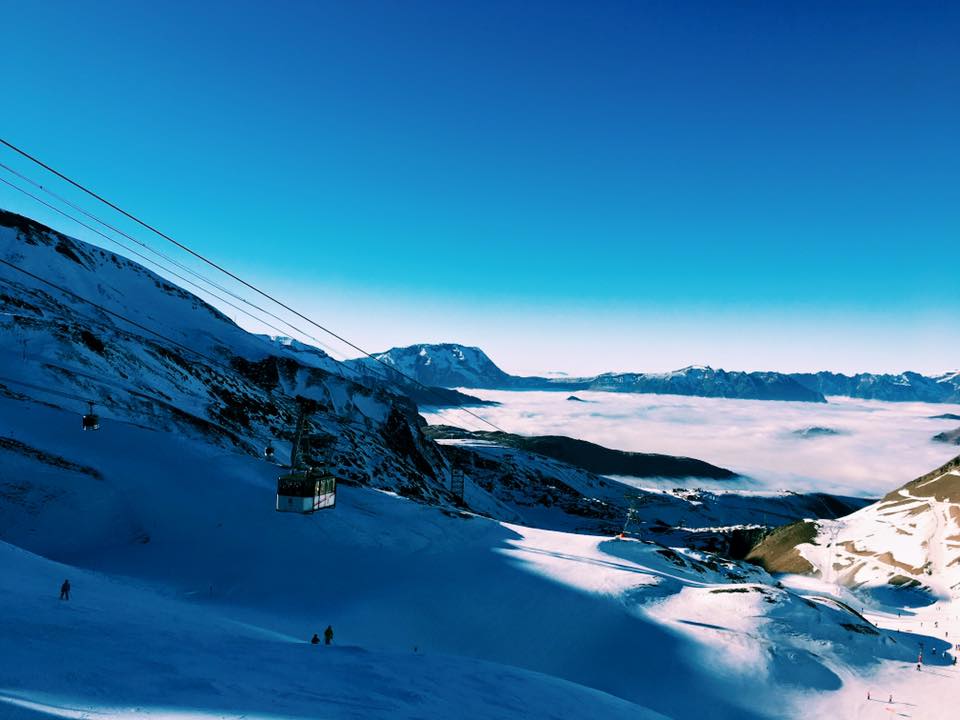 Fresh faced and chubby after the Christmas break, 400 enthusiastic GUSSC members clambered onto coaches to begin their twenty-six hour journey to Les Deux Alpes, France. Not gonna lie this was absolutely rancid and by the time we got to the Dover ferry port, there was only one thing for it – Port to Port. This involved tanning a bottle of the sacred fortified wine in between the Dover and Calais ports and was very, very messy.

On arrival, chaos ensued as hundreds of bleary eyed but excited students from Glasgow, Dundee and Plymouth queued to sort out rooms, ski hire and most importantly, tickets for the NYE event at Smithy’s Bar. Each room was assigned a Wasteland rep to co–ordinate each evenings plans and provide top quality banter. Once this was organised, we quickly unpacked before – you guessed it – getting on it. With champagne at two euros a bottle, Hogmanay was set to be a good one. Smithy’s didn’t disappoint, and the “Trip Tees and Tartan” theme helped everyone get in the festive spirit. What better way to see in 2017?

In the morning, students woke up feeling wide eyed and bushy tailed (not) for their first day on the slopes. Although conditions were’t ideal as there hadn’t been much snowfall, Les Deux Alpes has a glacier which allows for year round skiing. For some this was a hungover disaster, but the most valiant among us were rejuvenated by the mountain air and able to ski the day away until the 4pm Aprés at Pano Bar. Aprés was a trip highlight throughout the week and typically involved sick tunes, someone getting naked and a very hairy tipsy ski home. One day some giant inflatable dinosaurs even showed up.

The second night’s theme was “2016” and Yeti Bar was crammed with so much Bowie, with costumes ranging in accuracy and effort. Donald Trump also made a few appearances, and two students made Tab headlines when they dressed up as the infamous “Kermit the Frog” meme. We then migrated to Bresilien, a banging club with lots of stage/tables/chairs/window ledges/bars to climb on top of. You name it, we probably danced on it and/or fell off it. 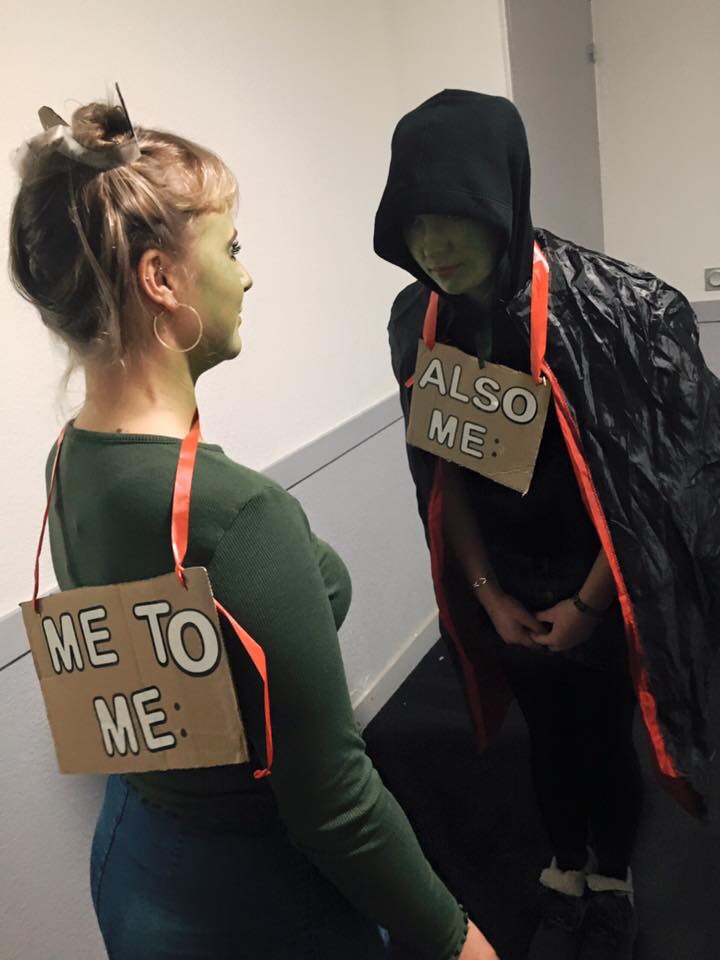 What do you meme

We pushed ourselves to attempt steeper and higher runs, although some of us preferred to stick to the trusty greens and blues. The T-bar run at the glacier was particularly hilarious, and if you got chilly you could sit with a hot chocolate in the cosy 3600 bar and watch people fall on their arses and get dragged uphill by the T-bar lift. The university trip is always very mixed, with students of all abilities and levels of experience giving it a go, so don’t let it put you off if you’ve never skied before and lessons and taster sessions are on offer and recommended in the run up to the trip.

Aprés on the second day were at Umbrella bar, located at the bottom of the mountain which meant no scary drunk skiing home and an excuse to get even more bevved (woop) – pints pints pints. They cost approx eight euros though, so if you’re savvy bring a hip flask and get sloshed on the snowy banks outside the bar. Around this time the sun set and the views were staggering – students racked up the insta likes. 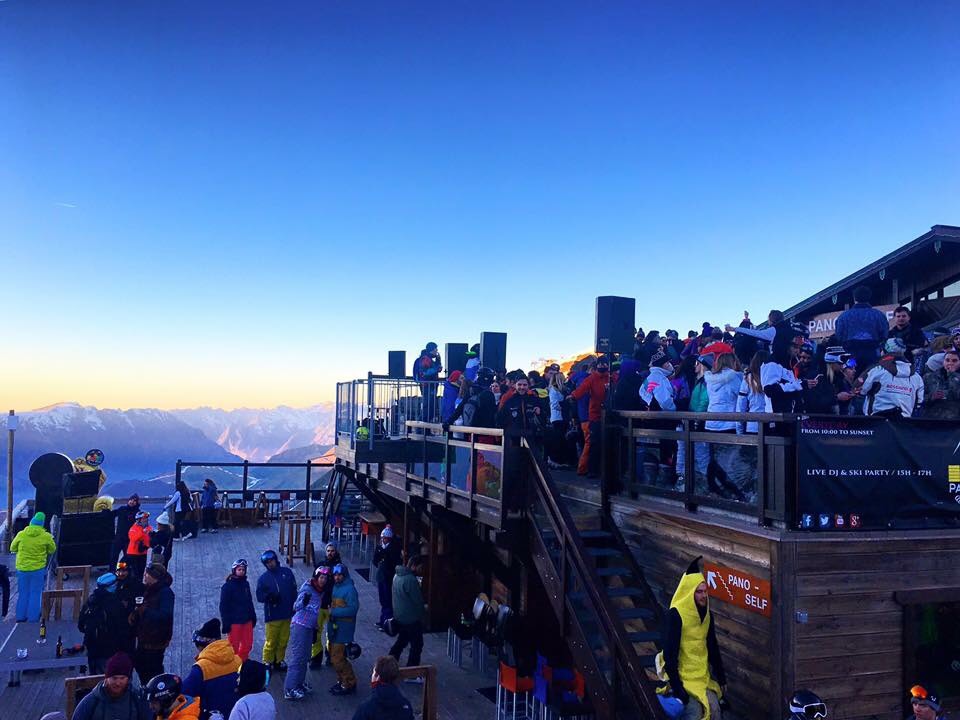 The other themed nights

Other themes for the week included “Now You See Me” (camo and high vis), Hen Party, Reverse Rubix Cube and, finally, Double Denim. Somehow, ski trip cast a mysterious magical spell that enabled most of us to get up and shed our hangovers day after snowy day. The Hen Party theme on night four was collectively agreed to be a cracking highlight – students donned devil horns, feather boas and inflatable men and got their screaming, provocative alter egos out in celebration of lifelong marriage to the sesh. The Reverse Rubix Cube night was also a big success, as students were required to dress in the colour assigned to their coach and then swap clothes until everyone was wearing every colour. What’s funner than swapping sweaty t shirts with sweaty strangers in sweaty nightclubs? Did I mention sweat? 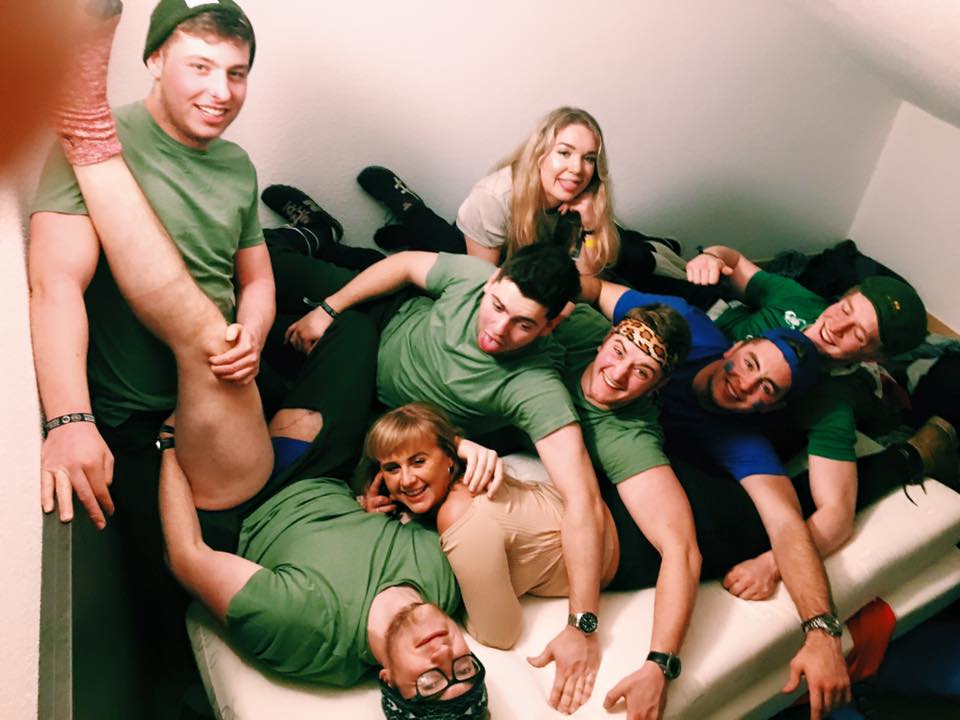 On the final day of the trip, many of the runs and lifts were closed due to poor weather conditions. By this stage many of us were weak, broken remnants of the students we once were, so this suited us just fine and we went for crèpes and mulled wine in the chilled (haha) Polar Bear pub. Fun fact – the massive husky-like dog who resides there is an actual rescued wolf.

This also allowed us to save more energy for what was undoubtedly the messiest and best aprés of the week at pano bar. What beats dancing on a bar? How about dancing on top of an elevated DJ booth halfway up the French alps, with amazing views. There was also a massive throne to get pictures on. Continue the party to Umbrella bar, giant dinosaurs, nudity… Shit got weird. Everyone there will agree it was a fitting end to what was a truly amazing trip.

Third year, Natalie, said: “I couldn’t even put into words how sick it was… Mainly because speechless but also alcohol.” 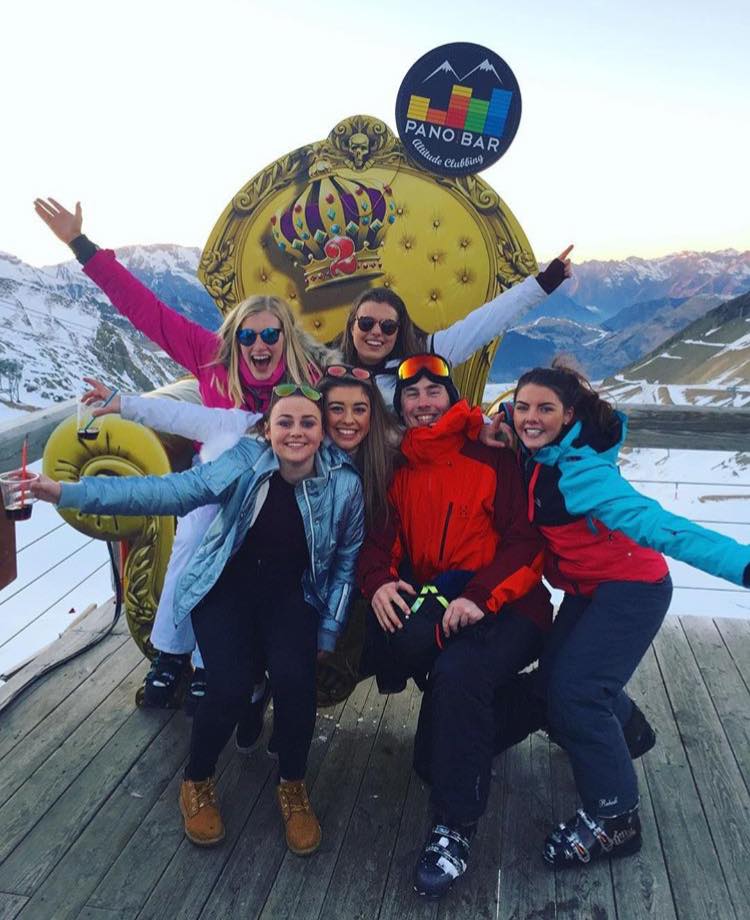 After painful scenes packing and cleaning on the hang, students were sorry to leave Les Deux Alpes behind them and begin the ridiculously long journey back to Scotland. The prospect of such a journey prompted several to stay an extra night and book flights home for the following day instead.

Times have been hard since coming home from ski trip, hence the reminiscent article writing. Like that one that got away in Freshers’ week, we’ll never get over the 2017 Glasgow Uni ski trip (until next year).