Stand-up comedy has become increasingly main-stream in the past decade and with more and more comedians trying to make their voices heard, it can be hard to distinguish yourself from the pack.

So hats off to 36-year-old ‘poet’ Tim Key, who not only offers something new, but changes the way we experience comedy too. 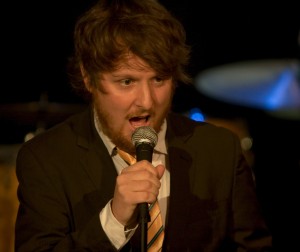 Key’s comedy show ‘Masterslut’ starts with two major differences: 1) the comedian is there to greet his audience before the show has even begun and 2) there appears to be a large bath on the stage. Already the stage is set up to look like something out of one of Beckett’s lost comedies, so any expectation of what you think you may see has completely fizzled into nothing.

The show then begins and as the comedian switches on a slide to show us (and himself) his ‘entrance’ route, it becomes clear to the audience that their active participation is mandatory.

Key begins the show according to a red line and scribbled instructions on the screen, shaking hands with audience members, kissing one woman on the head, and finally scrambling over seats to start.

His comedy itself is a nice mixture of bizarre anecdotes and ‘one-liners’ told as poetry that he has printed on the back of pornographic playing cards. Still with me? It gets crazier.

I would describe Key’s delivery as mostly dead-pan, but at times he screamed out questions and names like a terrifying psychotic. It was almost like watching a really terrible performance poet trying to inject emotion into his reading and failing miserably – except with Key it was fantastic, hilarious, and at times a little exhilarating.

The weakest part of his show, however, was the videos he occasionally used. Whilst adding to the whole surrealist theme, they were also a little boring, although Key made up for this with shocking physical comedy.

Take the bath for example, which he plunges into on several occasions, emerging nonchalantly to continue his comedy, only this time sopping wet.

It may also be a little nerve-wracking for those of you out there who dislike audience interaction – he would often pull people up to check the temperature of his bath water, or to dry his hair after one of his plunges.

However, Key had the intelligence to run with what his audience gave him, but also to recognise who wasn’t really willing to play ball. You have to admire such quick thinking on his part.

Overall this was an immensely enjoyable show simply because it was like nothing I’ve ever experienced before – it was funny, surreal, and sometimes even frightening. If you find yourself getting a little bored with the situational or one-liner comedy on offer at the moment, then I strongly recommend you see Tim Key. He’s a man who embraces both comedy styles in such a different and imaginative way that you’ll never look at comedy the same way again!