He stole £100,000 worth of Rolexes before hijacking a taxi

A helpless Edinburgh student was taken hostage by an armed thug, who stole £100,000 worth of Rolex watches before hijacking a taxi.

The robber entered Laing the jewellers in Edinburgh where he held staff at gunpoint after they opened for business around 9.30am yesterday.

He took between 12 and 15 watches from the premises on Frederick Street before he headed to nearby Rose Street where he tried to enter a black taxi.

The thug was refused by the taxi driver and further van driver.

He eventually hijacked a private hire taxi on Hanover Street, including the driver and a 19-year-old student, after pulling the gun from his bag.

The man then demanded the driver, take him to the north side of Edinburgh where he got out on the junction of Pilton Drive North and Royston Mains Crescent. 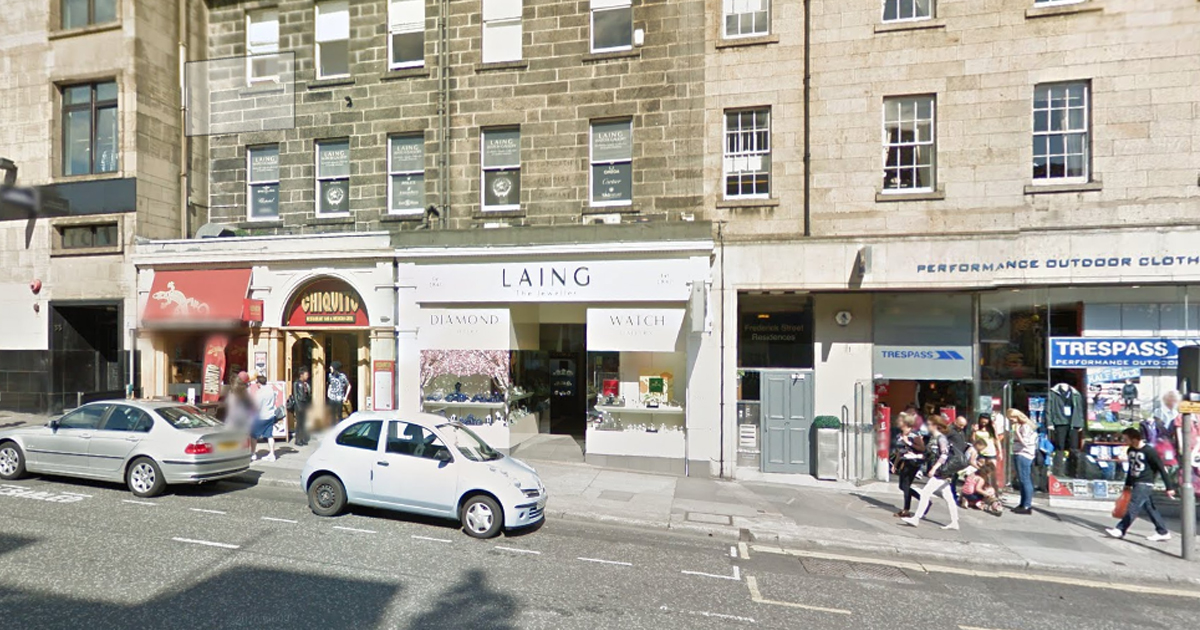 No injuries were reported but shop staff were said to be “quite shaken” after the incident.

The student who had been in the back of the hijacked taxi is said to be “extremely shaken up” by the incident.

A spokeswoman for Laing said: “Following the incident in our Frederick Street store, we can thankfully confirm that no-one was injured and some valuable items were stolen.

“It has been a stressful experience for our staff so we have taken the decision to close the store for business for the rest of today and let the police focus on their investigations.

The man is described as a white male in his early 30s, who is 5ft 10inches tall, wearing a dark padded hooded jacket and blue trousers.

He had a blue and white scarf covering part of his face and was carrying a black and white rucksack.

Detective Inspector Grant Johnston of Police Scotland said: “There was a robbery at Laing’s the jewellers on Fredericks Street at half past nine this morning.

“The man appeared at the front door and managed to get into the shop where he was seen to be in possession of a black handgun.

“Door to door inquiries are being carried out in Frederick Street, Rose Street and the Hanover Street area and also in the Pilton area.

“A number of watches, we reckon about 12 to 15 Rolex watches, were put into the bag.

“The items were taken from the display. There was no damage to the shop and nobody was injured.

“The man walked off towards Rose Street heading towards Hanover Street. He was actually followed by a member of staff.

“We will continue to carry out patrols and would ask all staff at jewellery shops to be vigilant and report any suspicious activity to Police immediately.

“We are looking for the van driver and the taxi driver who were on Rose Street South Lane.

“I am appealing to anyone who was in the Frederick Street area, Rose Streets South Lane, Hanover Street who may have witnesses the events.

“Anyone in the Royston Mains, Pilton area that may have seen him getting out of the taxi at Pilton Drive North and also to anyone who has any information at all about this crime to get in touch.”

“We are keen to hear from anyone who may have seen the man, or has information about the crime, so that we can trace him as soon as possible.”

Anyone who can assist police with their ongoing enquiries is asked to come forward and call 101.