Unmasked: The ‘distracting’ Deadpool fan kicked out of his lecture

Yes, he does Engineering

A Mildert fourth year dressed up as comic book star Deadpool for his lectures, complete with katanas and grenades, only to be kicked out.

Oli Rookwood, an Engineer, caused a mini storm on campus the day the Deadpool film came out. The comic book character is played by Ryan Reynolds, who also played him in the X-Men films. Oli told The Tab: “I organised a trip with a crowd of my friends to see the film, and wanted to look the part. First I bought the mask. Then the Morphsuit. Then the katanas, guns, holster, utility belt, sai, grenades, and a bell that says ‘Ring for sex.’ 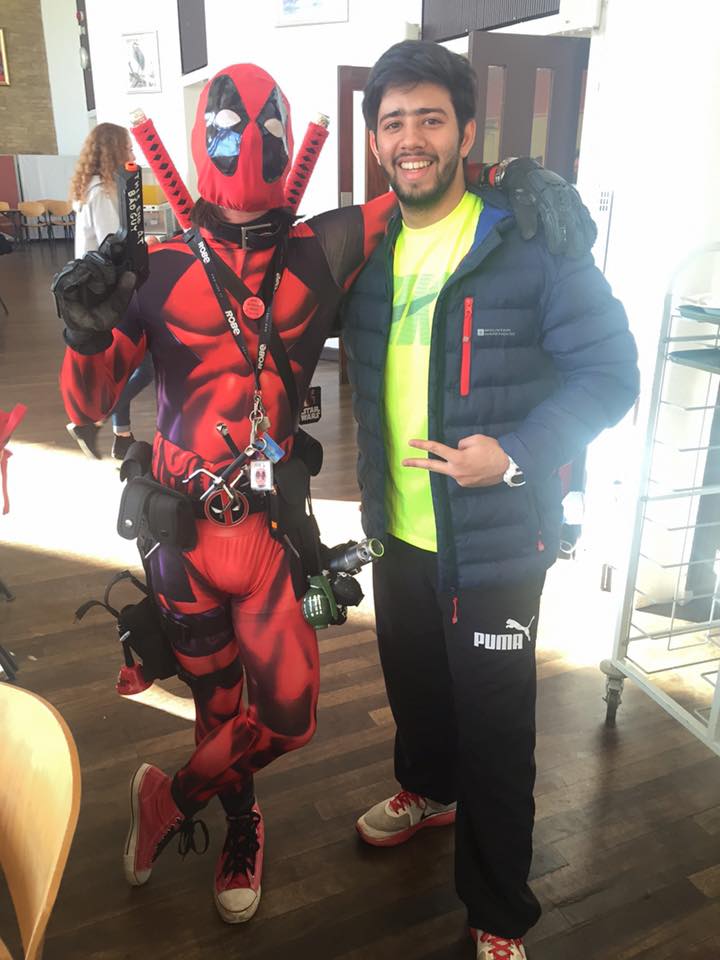 “Including postage, I spent close to £100. Cosplaying is expensive if you want to look half-decent. I cosplayed as him not just for the film showing on opening day, but (at the suggestion of others) for lunch, dinner, and lectures. Apparently my friends don’t know me, because they were surprised I actually did it.”

Deadpool was clearly a hit on campus: “Generally walking around, I either got smiles, people wanting photos, or people just didn’t know how to react. Or they thought I was Spiderman. Common mistake. He’s the one without the swords and big guns. 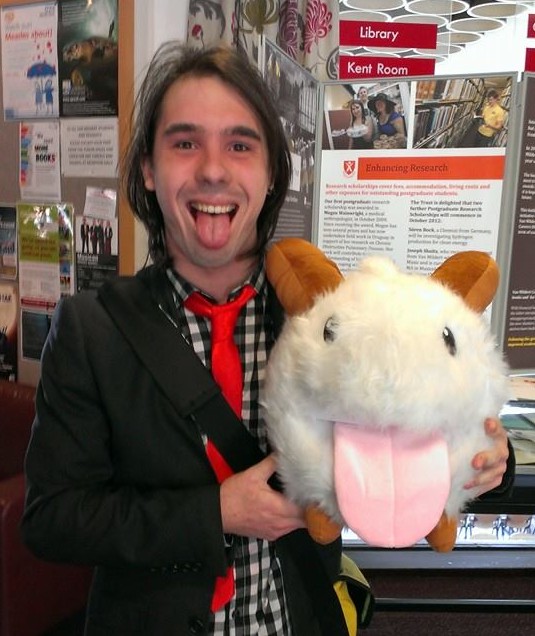 “I walked into my lecture at 14.10, a bit late, offering a ‘Hi’ at the stunned lecturer. After getting notes out at the front, I got told I had to leave.”

Despite Deadpool’s campus popularity, the lecturer insisted Oli leave. Apparently, he was too much of a distraction despite proving he was actually supposed to be there – and offered to remove his mask.

Oli said: “I was strongly tempted to fire a ‘pew pew’ with my mock gun, but I was so flabbergasted I couldn’t even stay in character. Honestly? Where is the document on lecture dress code? That’s exclusionary to mercenaries. 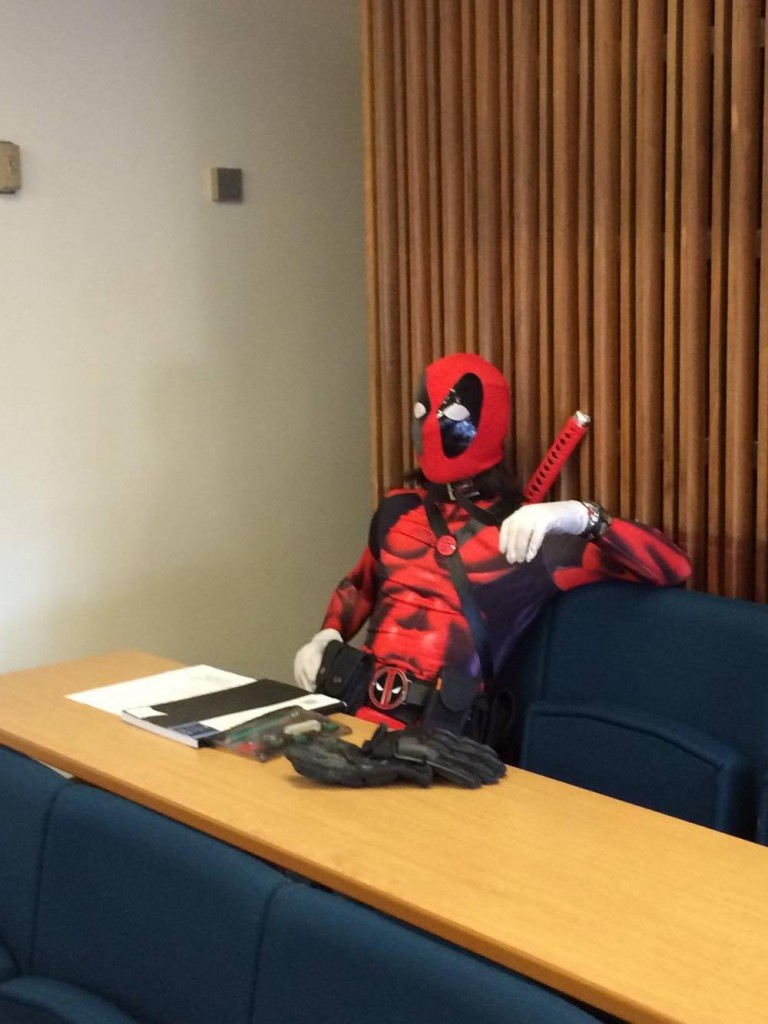 “I wasn’t planning on killing anyone, either. So ‘inciting violence’ wasn’t good reason to deny me the education experience I’m paying for either. I think someone started #StandWithDeadpool in solidarity.

“Honestly, I think the ‘bulge’ that comes with wearing a full spandex bodysuit was putting them off teaching.”

Oli spoke to The Tab about his love for Deadpool: “He uses dark, controversial humour to get a reaction, he acts like an idiot and he knows it. I’m very self-deprecating, and have quite a macabre humour, I enjoy making people slightly uncomfortable with some of the things I say. I enjoy that. 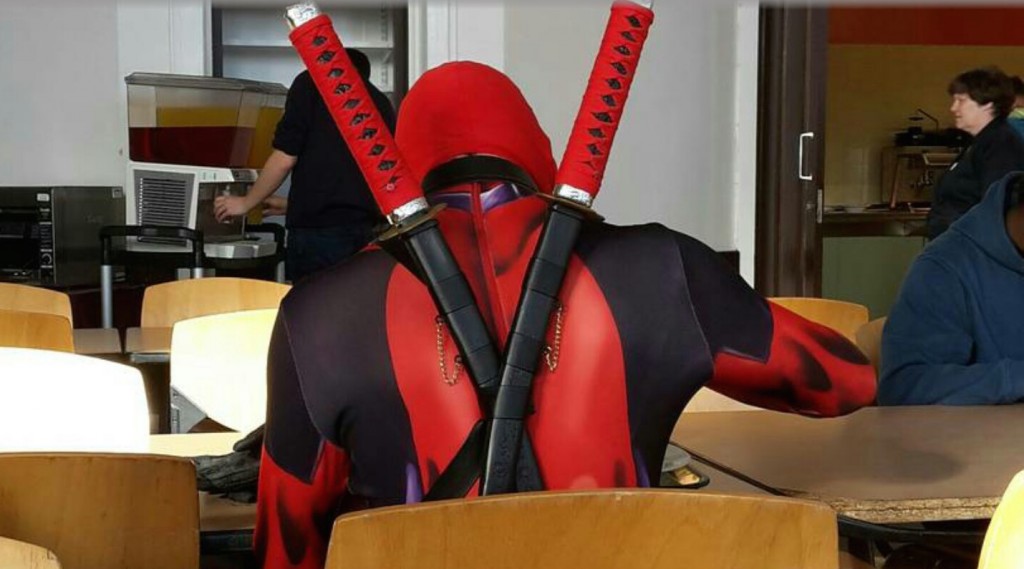 “In both the comics and the film, he is cripplingly self-conscious about his appearance under the suit. So, the suit and mask is more than a costume to him – it’s a different persona. It takes a while for him to accept himself. As someone dealing with similar body image issues, there is a very personal identification with him.”

Despite his oppression, Oli called the experience liberating, so perhaps Deadpool will return to grace our lectures again.