For a voyage that will leave every audience member beaming ear to ear, my journey to writing this review begins with my feet firmly planted on land.

Student life has a peculiar habit of hurling us into surreal situations. One afternoon, amazed at my luck, I arrived to scoop an interview with Downton Abbey’s Charles Edwards. Thinking I had the topics sorted, the very last twist I expected was for him to bring up, mid conversation, the annual DULOG Gilbert and Sullivan Production! Not only was he keen to hear how the shows had been going in recent years, but it transpires that in his time he has attended a fair few himself! After a moment like this, I wouldn’t feel unjustified labeling these productions as one of the North East’s most notable theatrical traditions.

With just three weeks to take a quintessentially English operetta from script to stage, and with a trail of acclaimed productions behind them, it would seem the demands placed on all involved in DULOG’s adaption of ‘HMS Pinafore’ were higher than ever. But fear not, for the decks of this production, the script itself over a century old, have been thoroughly scrubbed up and are gleaming!

Rarely in student theatre does one have the luxury of closing one’s eyes, and simply enjoying the sound of a superb orchestra, as they bring an overture to life with energy, dynamism and grace. Of all this production’s remarkable qualities (and there are far too many to list here!), the raw talent of the musicians and vocalists led to an evening of near flawless musical entertainment.

Despite this being her first G&S, Polly Leech’s impeccable operatic credentials could not have prepared us for her spellbinding performance. While this material may be considerably lighter than what Miss Leech was used to, given her time as a leading member of Durham’s Opera ensemble, her’s was the standard of performance I would expect to see gracing Europe’s finest stages.

Holding the position of President of DULOG, Hannah Howie was placed in the remarkably difficult position of having to portray a convincing male romantic lead, a task made no easier by the caricature inducing lines which lace the scripts. But absent was any hint of pantomime. What we were instead presented with was a fully developed romance, during the course of which I found myself so taken in by Howie’s characterisation, that any gender reservations were long forgotten. Despite being required to sing at but the lowest reaches of her vocal range, Howie’s success appeared effortless. 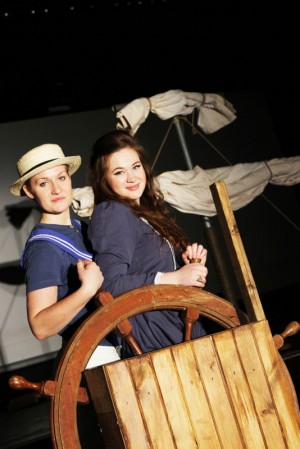 The character who truly won me over was the lovable, pitiable, confused old admiral, pitched just right by Freddie Herman. His infirmity, physical and mental, was wondrously yet gently portrayed.

An often overlooked group, the musicians themselves, provided an accompaniment as worthy of attention as the onstage action. Choosing to stage the production in the Town Hall was a masterstroke, if for no other reason than it prevented the orchestra from being cast into a dimly lit pit under a stage. Instead they were brought directly into our line of sight, and rightly so, for people quickly forget how a flat note or absent instrument can leave a whole production feeling deflated and dull. Indeed, it was the Orchestra who saved this production from it’s one minor hitch; the temporary absence of a cast on stage. One has to question what went wrong for the overture to be complete, while the cast could still be heard outside the hall waiting for a cue to enter. With lights up on an empty stage, it was the skilful control of the Musical Director and production team which successfully plugged the apparent gap, and reassured the audience that all was well. Despite the delay, I feel a logistical error, so early in the run, can offer no real reflection on the professionalism of the performers. Rather it would seem to hint at the difficulties of converting a Town Hall into a public theatre, complete with the fully functioning communication channels.

Tricky as the Hall may be to operate, with the flags draped on a far wall, the historic crests resplendent all around, and the dark beams looming overhead, this setting was the perfect foil to director Charlie Oulton’s adaptation. Against such a backdrop, and with such material to work with, some could fear that the production would have felt quaint and dated. Any such concerns were smashed by the energy of the cast; this was Gilbert and Sulivan as it should be done. Preserved in good measure were the camp humour and daft plot-twists, the period dress and the original score. However, this highly engaging cast, who bristled with creative energy, gave our classic operetta a fresh and vibrant revamp. I’d challenge any professional company to tackle our Durham degrees and still stage such a gleaming adaptation in but three weeks! Long may our TV stars flock back to see these productions, and long may this show preserve the daft but wonderful work of Gilbert and Sullivan; DULOG I salute you!