Confessions of a dartboard bandit

Students have kicked off after a mystery thief has anonymously admitted to stealing and then returning the Undie’s dartboard, damaged.

Students have kicked off after a mystery thief has anonymously admitted to stealing and then returning the Undie’s dartboard, damaged.

The secret smuggler announced the theft on the ‘Durham Unay Confessions’ Facebook page last week with the following message: 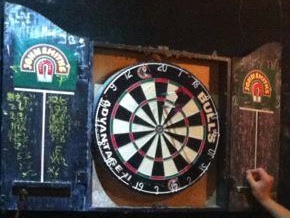 Sorry if you tried to play darts in the Undie last night; I smuggled the board out under my jacket. You would think such a prestigious college would notice a thief crab-walking through a hobbit door at night, after picking up their campus card, let alone returning it in daylight the next day through a rabble of tourists, middle finger to the world.

But the plot thickens…

Whilst it was indeed returned to its rightful owners, the dartboard was damaged and the numbers failed to be returned.

As you might imagine, University College Darts Club members were not impressed by the deed, responding:

“The board in the Undie I bought out of my own money to replace the one that was there at the start of term.

“We have a league match this Monday which may have to be postponed because you forgot to return the wire with the numbers on it.

“Congratulations on sneaking it out, I guess no one was expecting someone to behave like such a prick. However during the day any student can look around the Castle, it belongs to the University.

“I hate this ‘college rivalry’ crap. We’re all students at the same university, and all the colleges are great in their own unique way.

“Hopefully people with huge chips on their shoulder about what college they did or did not get into are in the minority. I would hate to think that lots of people here thought the way you do.

“Please return the numbers, someone so crafty as yourself should have no problem getting them back anonymously.”

Another member, Tom, said: “UCDC have a superb chance of success in the league this season and the damage to our dart board has had a really negative effect on our preparation.”

However, the offender has certainly not got away scot-free.

One of the managers of ‘Durham Unay Confessions’  said: “We have been in touch with the person who stole the darts board and he has assured us that he will get in touch with the Castle treasurer regarding the damages.”

So has the culprit learnt his lesson? Only time will tell. But for now students of Durham, lock up your dartboards: the thief remains among us and who knows when he will strike again…?