The #speakout movement fights against xenophobia in Cambridge.

The COVID-19 pandemic made us aware of problems which the University was not prepared to solve. The coronavirus also turns the spotlight on xenophobia, which will stay in Cambridge even after the virus is gone. Yi Xing told The Tab Cambridge her story about how the #speakout movement helped her find the courage to stand up for herself while experiencing coronavirus racism.

The hashtag and the movement behind it started after Collin Eduard, a black Gates scholar, was denied entry to St. Catherine’s College in February. Yi Xing’s and Collin’s incidents are not unique and several other students with different backgrounds found hope and support in the #speakout project.

“I was buying my groceries at Sainsbury’s when someone saw me, gasped, said “Chinese”, covered her mouth, and quickly walked away with her friend” – started Yi Xing to share her experience which happened in the early days of COVID-19. “I was shocked, knowing the possible reason why she did that, hence I mustered the courage to tell her that I heard what she said, but she didn’t dare to face me.

A friend of hers asked what happened, and she said that I was having a go with her because she mentioned coronavirus. I’m completely certain that she didn’t actually say “coronavirus” when she first saw me but now it was obvious that she was linking “Chinese “ and “coronavirus” together. I then told her that I’m not from China and was going to say that even if I were, that wouldn’t mean that I am carrying the virus”.

Yi Xing said she generally avoids confrontation and gained the strength to stand up for herself from the #speakout movement: “I think I really gained my courage from reading the stories shared by other people and I just felt that I need to do something because there are so many other people experiencing something like this. If I haven’t read any post like that in the past month I might have just kept quiet. But I do think it is important to spread awareness.”

She experiences everyday xenophobia against Asian people, which the coronavirus just multiplied. “Even if this virus doesn’t exist, there is still some form of prejudice against Asian people. I have witnessed casual racism when people are just making jokes.” Yi Xing considers casual racism when people are not looking at her while interacting with her, or when they are making fun of her physical features. “Because racism can be so subtle, we can never get evidence that we really experienced something “ – she thinks. However, her incident is not without precedent. “There has been a boom in stories of explicit racism, it has increased a lot because of this virus. Not just towards Asians, but I heard stories also from Italians. It’s scary because it has sort of expanded to anyone from countries that the virus affected seriously.” 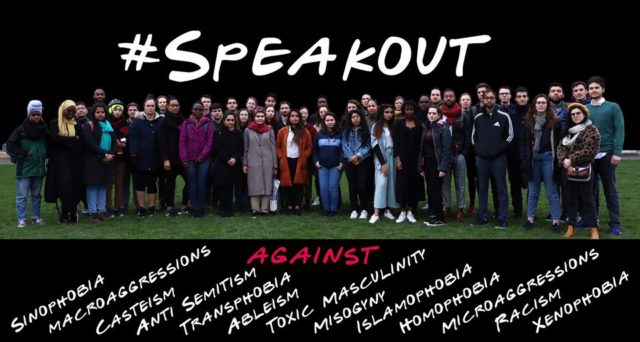 Lashanti, who is a supporter of the #speakout movement, thinks that the pandemic just brings those issues to the surface which have already been present in Cambridge. “This coronavirus gave xenophobic people justification”, she said. “People don’t take the time to actually understand where someone else is from. That it is just automatically assumed and connected to coronavirus, is a shame. The fact that it happened in a group of people means that it is kind of a herd mentality. It is sad. People are xenophobic here, they just got a reason to act out due to the coronavirus.”

For Lashanti, experiencing racism in Cambridge was new as she is from the Bahamas where she did not belong to a minority. She encountered the same casual racism of which Yi Xing was talking about. “Someone seeing me at a public speaking event automatically assumed that English is not my first language, and I would need help from a native speaker”, Lashatni shared one of her stories. “The university doesn’t address the bigger problem, that people here are just not culturally aware”, she concluded.

Lashanti took part in the gathering of the #speakout movement in early March. “When we got there,  I saw a multiracial and multireligious group of people coming together standing for a cause affecting all of us. Hearing the story of the black Muslim girl really touched me. I realized my privilege. I have a bit easier life than she does because I am not wearing a hijab. The type of reality she has is completely different from mine. I almost cried that there are people amongst us who have  day to day fears that we don’t necessarily have. It reminded me that sometimes people have to make other people sure that they are welcome.” 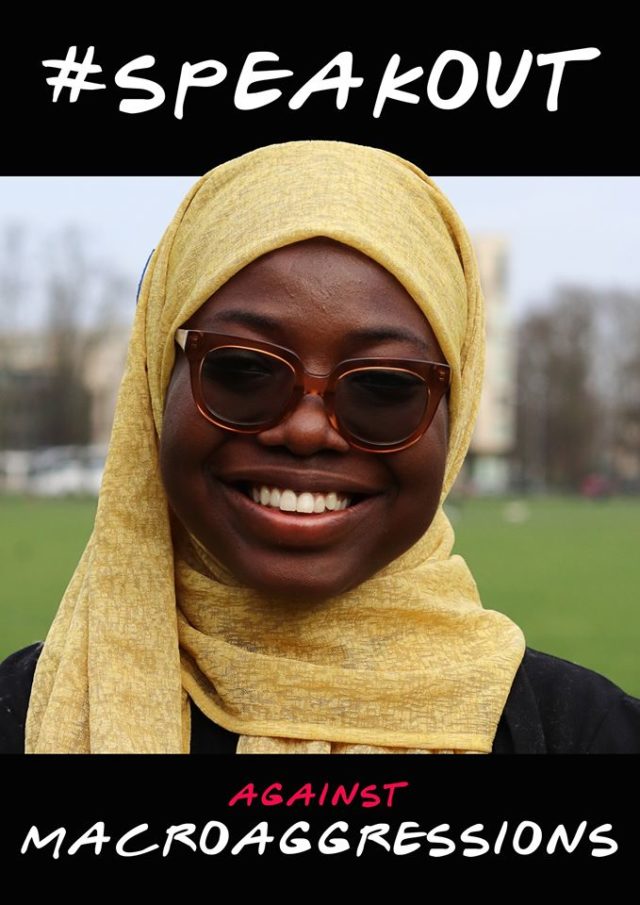 The Tab Cambridge approached the girl who made Lashanti realise her privileges. Aisha is a black Muslim woman whose mental health is seriously compromised by the racism she must face in Cambridge.  Aisha feels her physical appearance reinforces her impostor syndrome and people are scared of her. “I started to battle with imposter syndrome and question my acceptance into the University. As a sort of defence mechanism, I isolated myself and tried to avoid going to social gatherings to avoid the inevitable “sticking out of the crowd”.”

Yet she didn’t give it up, and step by step, tried to overcome her fear: “I still get those awkward stirs and weird glances like ‘how did she get here? What is she looking for here?’ but I try not to pay attention to it.” Aisha gained strength also from the #speakout: “When I came across Collin’s post on Facebook, his willingness to be vulnerable in public whilst still being fearless, as well as strong, made me left in pure awe and really inspired. The media coverage, hearing about other people’s stories, and the awareness that his devastating experience brought to the big racism problem here in Cambridge reassured me that I’m not alone and it’s not about me.” 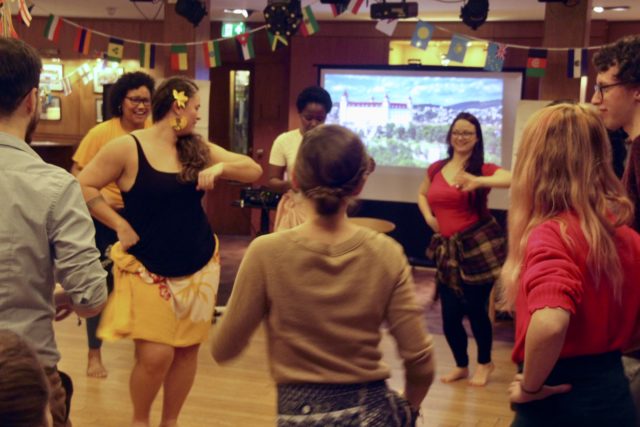 Teuru joined the movement for completely opposite reasons than Aisha or Lashanti. She engages with #speakout because she does not like the racial assumptions made about her. She is white-passing and treated accordingly, however, she identifies as a Cook Islander and is proud to share her heritage. “What has struck me about being here is that it is so different everywhere. Here there is contextual racism and xenophobia, against Eastern Europeans or people from different regions of the UK. Being a Cook Islander here does not mean that I am an ethnic minority because I look white here. It would be different in New Zealand. It is very interesting to me here what people assume and think about you.”

Similarly to Lashanti, Teuru is also aware of her privilege: “I’m a Cook Islander but nobody here knows what it is. I am just white – but I don’t feel white, it’s an imposed identity. But when people say it, I can’t say anything back, because I don’t want to take away someone else’s struggle by mentioning that I actually identify as a Pacific Islander. This is the place where I feel I have to step back because I do have the privilege as a white person here.” 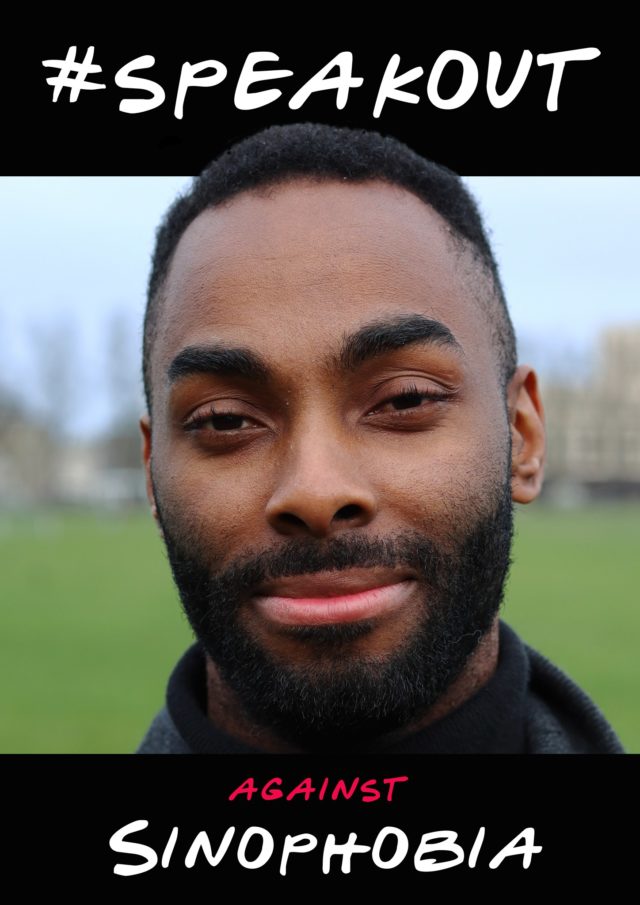 However, Collin, who started the #speakout movement, thinks it’s for everyone. “I want people to know that their feelings are always valid.” Remembering the speakout gathering, Collin recalls: “Several people said they showed up because they wanted to speak out against racism, ableism, misogyny, etc. They all have their own specific reasons which unite us all together. We don’t necessarily have to go through everything which is on that list of things that we are against, but we can support one another. This gathering shows that we are not alone, and actually we have a support system, we are allies. We are strong together. You can’t speak out if you don’t have people ready to come behind you. 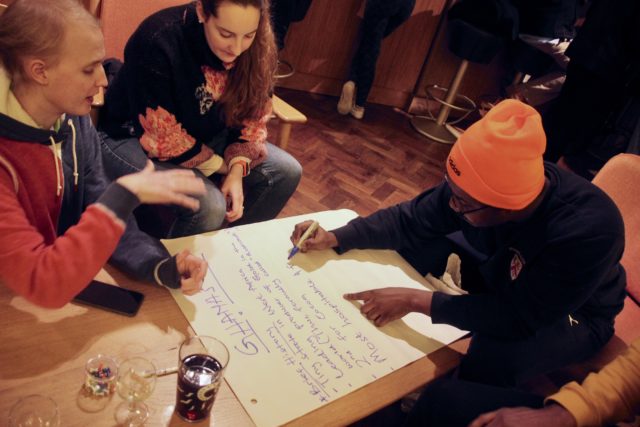 While Collin sees the solution against racism in being vocal about the hostile experiences, Lashanti wants to have more possibilities to appreciate each other’s culture, such as the Culture Swap at Wolfson College. “I think it was one of the best things that could have happened. My college, Wolfson created this platform for people to learn about each other, without feeling that they are imposing themselves on each other. It’s interesting to learn about different food, cultural things, languages and just make people as real-life examples.

We have such a unique opportunity in Cambridge to meet people from different cultures. I don’t feel that Cambridge does enough to even just acknowledge internationalism. And doing that will encompass some of the other issues that we face, different religions, traditions, heritage and cultural beliefs. A step forward is just to acknowledge the cultural and international differences, which is a step in the right direction.”