The College announced plans to increase first year and freshers’ rents by 2.7 per cent next year

On Saturday 23rd February, Newnham students displayed a banner from one of the college's rooftop gardens, protesting the College's proposals to increase incoming freshers' and current first year's rents by 2.7 per cent next academic year.

The visual protest was combined with an open letter to the College: the signatories of which included all six CUSU Sabbatical Officers. Protestors' demands were threefold: an abandonment of the rent hike, an investigation into fairer rent policies, and for 'honest and open' rent forums. 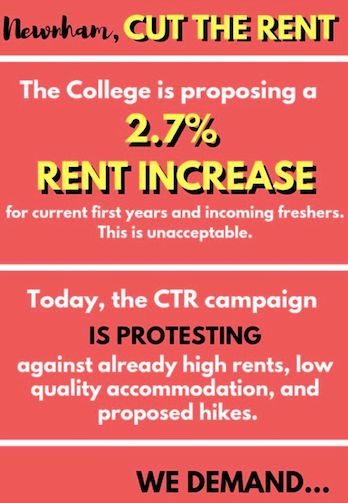 Newnham students reported the lowest satisfaction with rents and charges of any college in the Big Cambridge Survey 2017-18 (Source: Newnham Cut the Rent Facebook)

The Newnham Cut the Rent campaign told The Tab that, in particular, they are currently hoping to pursue means-tested rent bands with the College. Failing a uniform reduction of rents for all Newnham students, it is hoped this policy could maximise the benefit of the Cut the Rent campaign's activities for those students who need it most.

The announced rent hike comes less than a year after Newnham students reported the lowest satisfaction with rents and charges of any college in the CUSU Big Cambridge Survey 2017-18. 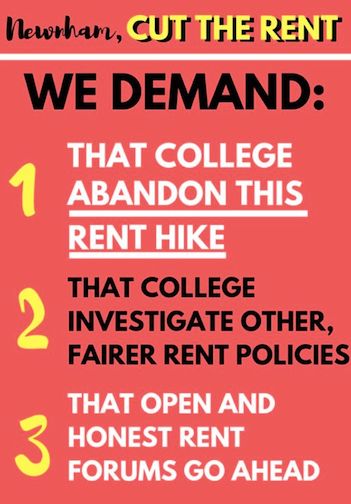 In response to the protests, Newnham closed the rooftop gardens to carry out a safety review; in a corresponding email to students, the College asked students '"to share their views and raise any concerns safely and legally". 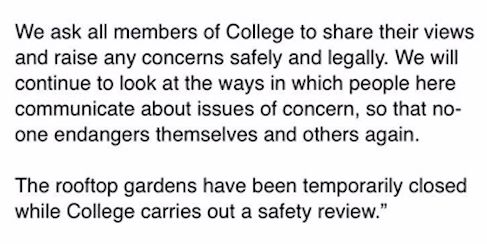 In the same email to students, the JCR stated:

"Protest and progressive ideas have always been a part of Newnham College's history. The College and JCR Committee believe that students should be able to protest on issues they care about, as long as students do not put themselves or others in danger."

"The College and the JCR Committee aim to collaborate to create spaces where students can voice their concerns before feeling the need to protest".

In response to the major grievances raised by the Cut the Rent protests last week, the College and JCR Committee are holding a forum for Newnham students to discuss undergraduate rents.

The Newnham Cut the Rent Campaign released the following statement regarding their current efforts:

"We have chosen to carry out action today because, despite multiple displays of our dissatisfaction with rent and the quality of accommodation, the college does not seem to be listening to students, and has recently expressed an intent to raise the rent."

"Rent is already unaffordable. Our survey showed that 77% of students are dissatisfied with the price of rent. 36% of students feel rent has a negative effect on their mental health, citing reasons such as mental health, the guilt of a financial burden on parents, and the opportunity costs of high rent meaning that they had to stop doing extra-curriculars they used to enjoy. Rent is a welfare issue. Rent is an access issue. Rent is a feminist issue."

Given the College's failure to act upon the findings of last year's Big Cambridge Survey, campaigners will certainly be hoping that their recent efforts might catalyse more meaningful change. For now, they await the College's response to their efforts.