Edging the truth to look edgier

We’ve all done it, is it helpful?

A new year, a fresh start. More people to meet and more people to impress. Whether you're at Cambridge for the first time or are returning after a long summer we all care about what people think of us and how we're viewed.

There's a temptation when you're sitting in a cramped room, desperately clinging onto a warm beer, to embroider stories about your summer or life back home. You wish you didn't want to do it but it comes all too naturally. We live in a world where we constantly have to think about how we present ourselves. Social media means we can have a depiction of us online that shows us at our funnest and our fittest and one that is well…edging the truth. So much so that it's become a cliche to compare the image of ourselves online to our 'real self.'

We're all constantly endorsing this culture, just by posting a carefully selected insta post. But when you do it in real life, in actual face to face conversation, it feels odder and less natural. Even if it just slips out, it suddenly feels like a deception — whereas online, it wouldn't even cause you to bat an eyelid.

If I ever do it I feel guilty, but is that really necessary? How much harm am I actually causing? 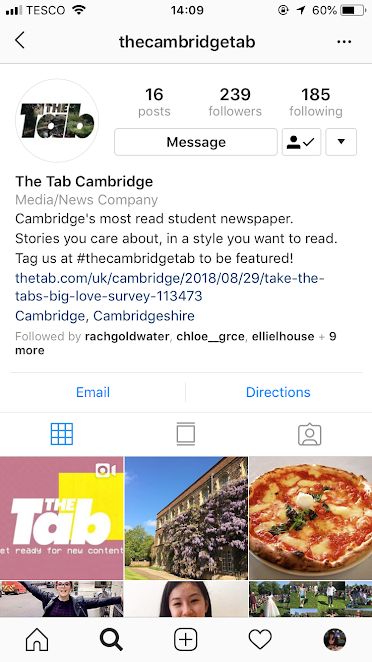 watch even the Tab edging the truth on insta

It seems that if the lies, or half truths, that spill out of your mouth are fairly benign and make you feel a bit calmer it can be helpful. If you think about it you can view it like social media. In freshers’ week, or when meeting new people, you can at first present a cooler or generally better version of yourself. It could make you feel more comfortable about making friends or perhaps even give you the opportunity to make conversation. An example I always give of this is in freshers’ week I pretended I was a social smoker to try and get in with two people I wanted to be friends with. (Sorry mum). It worked a treat, even more so when a week in we all ended up confessing that none of us were actually smokers at all and had just done it because we thought the other two were. Great hilarity ensued and they're still two of my closest friends at university. So it could be harmless, even helpful. But it is perhaps not the best way to go about things.

The thing is, when the half truth is small enough that in time it will get forgotten or explained away, it's fine. Or perhaps you end up living that reality, but this is an uncomfortable one. If it's something you always wanted to do but were too scared, then go ahead! Live that new reality that was originally based on a half truth. But in the case of most lies, living them out isn't the greatest path forward. As much as fresher me may have wanted to, she was never going to enjoy the taste of cigarettes, and if that lie had be played out it would have ended in a fairly sub-par habit.

And this is the point where this article sounds a bit like something out of Cosmo. Lying to be cool can be a bit helpful but in doubt it's almost always better to just…not. Edging the truth to look edgier is ultimately not going to make you feel a lot better if it becomes the norm. If those around you know more lies about you than they know the truth it's mainly going to be irritating for you to keep up. And when the truth is ultimately revealed it's not going to make you look that good. It can be a fine line between small half-truths that will go away and larger ones that will not be helpful.

This article isn't meant to be any sort of warning or scare. Twisting the truth slightly is always going to be a part of socialising, especially when you're in an alien environment with new people.

But it's just interesting to consider how far you take that, especially when you think about the difference between social media and “irl”.