Love Island and Oxbridge: why do people want to link the two?

If you look around you'll realise it's the most wonderful time of the year. In the air there is an atmosphere of love, lust, cocktails and constantly asking yourself if people walking around in their swimwear and having sex on TV is empowering or not. Love Island has returned to the airwaves.

The show itself is arguably very harmless. And this year it's become a firm favourite of mine. But this article's not about persuading you to watch love island (although you might as well get over yourself and give it a try). It's about the tweet you see every year around this time. About just how many people apply for Oxbridge compared to Love Island. 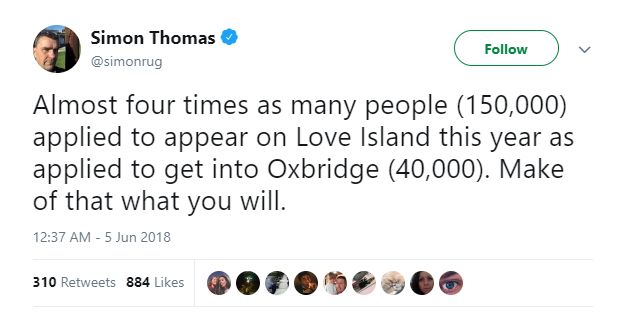 You've all seen it before I'm sure

It's one of those tweets that I can't help but get a little angry about. There's two problems with this tweet and what it infers. Firstly the comparison is completely arbitrary. It's a classic case of making a conclusion from two stats with its only validity being that…well they're two stats. It's a technique no one should get away with pass Geography A level.

One feels more achievable. The TV programme is open to everyone and, as far as I'm aware, doesn't require any qualifications (bar that of being traditionally attractive and outgoing). The people you see on screen feel very real, you wouldn't be surprised if you saw them in your local club. Whereas Oxbridge is open only to the top academic achievers, with the pool being even lower when all those who were able but felt like they could not apply due to their back ground are considered. To a lot of the general public, only those considered to be from a richer, more privileged family could be in the running for a place at Oxbridge. The two appeal to different groups of people who have different aims and interests. To compare them just doesn't make any sense. 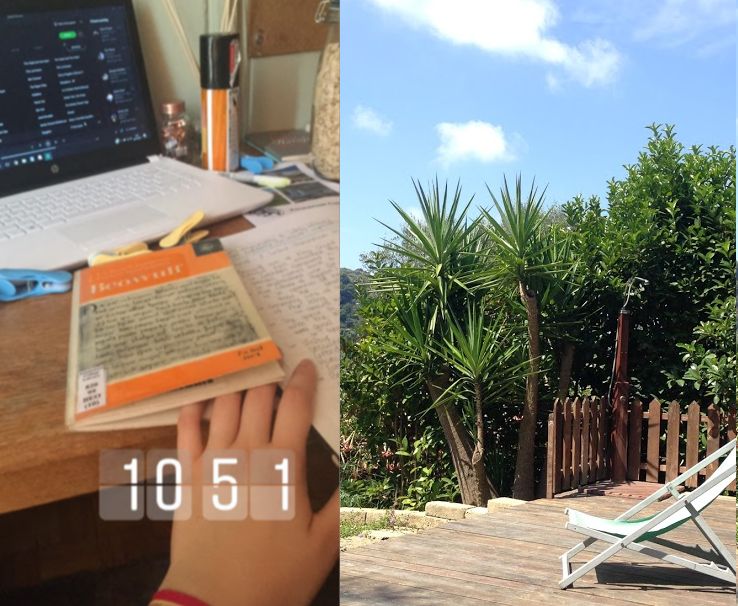 I know where I'd rather be

The second problem is that this tweet ultimately infers one is worth less than the other and that the fact people are interested in Love Island more than Oxbridge shows something dire about humanity. The whole attitude of the tweet reinforces this idea that being at Oxbridge is inherently positive and worthwhile whereas being on Love Island is inherently the opposite. I'm not saying that the next prime minister is in the current line up of Love Island but they're still ambitious people who can have just as much to give to the world as anyone here. Especially with the recent events and accusations, it's hard to call the Oxbridge experience inherently positive.

It's an easy route to take to equate choosing Love Island over Oxbridge to lack of drive or intelligence. One that the media takes too often. 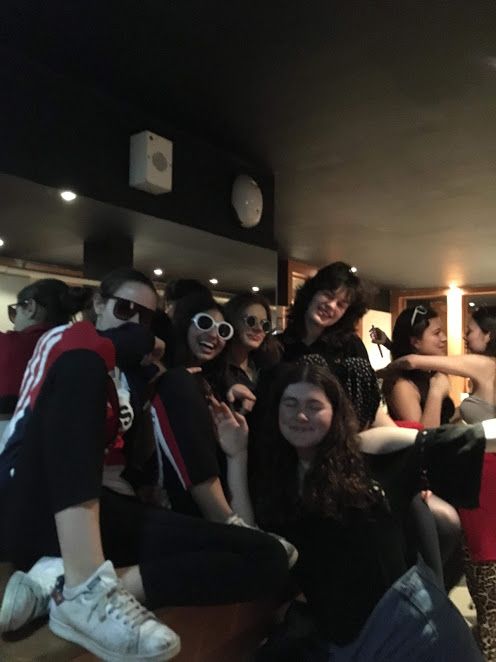 But why are people so quick to make a link between Oxbridge and Love Island? Why is it a comparison that immediately springs to mind when it doesn't really make a lot of sense? It's all because they do seem like completely different spheres that would never intertwine and pitting opposites against each other is always a favourite trope.

But the two don't have to be exclusive and apart from one another. Oxbridge students often love to watch a bit of Love Island and follow the participants on instagram. And for the new found celebrities they may well use ex-students to help build their business or in their day to day life. It's all part of the wonderful eco-system that is a more economically developed country.

Singling out the two sides as completely separate isn't very helpful in a Britain that's currently fairly divided. We need to focus on accepting how important everyone is in our modern world and just keep communication open and flowing. And who knows we'll get a CanTab in the villa this time next year…