Cambridge sees 70% increase in study drug usage within a decade

Study drugs are something most people in Cambridge have heard of, and have an inkling that students are taking them to boost their work performance. What we wanted to find out was how prevalent the use of these drugs is across the university, and what people think about their usage.

It is undeniable that in Cambridge studying pretty much dominates our lives (or can feel like it does), so it is perhaps unsurprising that people would want to take something that they believe would give their mental faculties a boost. We asked you to fill in a survey about whether you’ve taken study drugs, and if you have, what drug(s) you have taken; and if not, whether you would. Hundreds of you have filled out our survey, and our results are detailed below.

Study drugs are those such as Modafinil, Ritalin, and Adderall, which are prescribed as treatments (Modafinil for narcolepsy, Ritalin and Adderall for ADHD), and are instead used by students to improve cognitive performance.

A quick note about the data – we asked people to give their subject and year. Of those subjects who got fewer than five responses (e.g. ASNaC, AMES, Music, Theology), we have discounted them from the individual subject percentage breakdowns. The survey was, of course, self-selecting, so there could be a bias relating to those who chose to complete the survey.

It is interesting to see how this compares with estimates across universities and from previous surveys. A study by the NUS quoted in The Guardian this year found that 1 in 10 students have used study drugs. This is comparable to a previous reported figures of 10%-15%, an estimate given by a research associate at the University of Zurich, also quoted in The Guardian.

A survey conducted by Cherwell in Oxford in 2016 which had 662 participants found that 15.6% of those at the other place have taken study drugs.

Varsity conducted a survey in 2009 which found that 10% of the current students then had taken study drugs, suggesting a startling increase in their usage in Cambridge in the elapsing 9 years.

From our findings, the use of study drugs in Cambridge appears to be higher both than the average across universities, and even the level in Oxford. That the percentage is higher in Cambridge than what the NUS has found nationally is perhaps a reflection of the greater academic pressure in Cambridge and other elite universities. The difference between the figure we found in Cambridge and that of Oxford is likely to be from the increase in study drug usage over time.

For undergraduates, we found that those in their third year used study drugs the most, with the usage increasing from first to third year, then dropping slightly for fourth year students. This is a potential indication of the added pressure of finalist exams, leading students to focus more on their study in what is the final year for most students.

The study drug usage of postgraduates is much higher than any of the undergraduate years, suggesting that academic life does not get any easier after one received got their BA.

The three subjects with the highest study drugs usage are Economics, Law, and Land Economy. Those students who are going for the intense, corporate careers are clearly preparing themselves for it now. For some subjects though, none of our respondents have taken study drugs before, these were Linguistics, MML, Chemical Engineering and Veterinary Medicine.

Perhaps what is somewhat surprising is that 15% of Medics have taken study drugs before, given that they would presumably be the most aware about side effects of drug usage. But then again, they do have the most demanding degree, hours wise.

Although first year students are those who have taken study drugs the least, they have the highest numbers of those who would consider taking study drugs in the future. This could be indicative then of why there is a increase for future years, as those who did not use them in first year feel like they need to in later years.

If we look at both students who have taken study drugs and those who would take them, 40% of Cambridge students are open to study drugs usage, quite a significant proportion.

There is a clear variation across subjects as to how open students are towards taking study drugs, with some subjects having a majority who have taken or would take them (Computer Science, Economics, Law, English, Land Economy), and other subjects with little interest (Classics, Linguistics).

In response to this survey, a University spokesperson has said “We have not seen any evidence of a widespread problem, and its scale is difficult to gauge from this small sample size.”

However, the message to students is that they are “strongly advised not to take any such medication unless they have a prescription for them” and that “selling prescription drugs is illegal and their use can lead to unwanted side effects.”

For students who are struggling to cope personally or academically they are advised by the University that there is a wide range of support at college of university level, students can talk to their college pastoral team, student welfare officers, CUSU, their GP, or the university counselling service.

Professor Barbara Sahakian, from the Department of Psychiatry at Cambridge, has studied the effects of cognitive enhancing drugs. She told The Tab that there is a concern in the increasing lifestyle use of the drugs, since there have been no long term testing for the safety and efficacy of Modafinil use in healthy people. There is the additional serious concern as well, that since the drugs are often bought online, they could be contaminated.

Professor Sahakian had conducted double-blind placebo controlled studies which have been published, that shows that at least in the short term, Modafinil is a cognitive enhancing drug. In particular, it increases task-related motivation. As yet there have been no evidence that there is abuse potential to Modafinil, as opposed to other common stimulant drugs, and it has a low side effect profile. This may explain why many people choose Modafinil as a study drug.

Her research has been conducted with the focus on finding cognitive enhancement drugs for those with serious mental health problems. For healthy students though, she emphasises that it is just not worth the risk taking these drugs, whilst our brains are still in a developmental phase, instead exercise is a much better choice. It has been shown to increase neurogenesis, including in the hippocampus, which is important for memory. 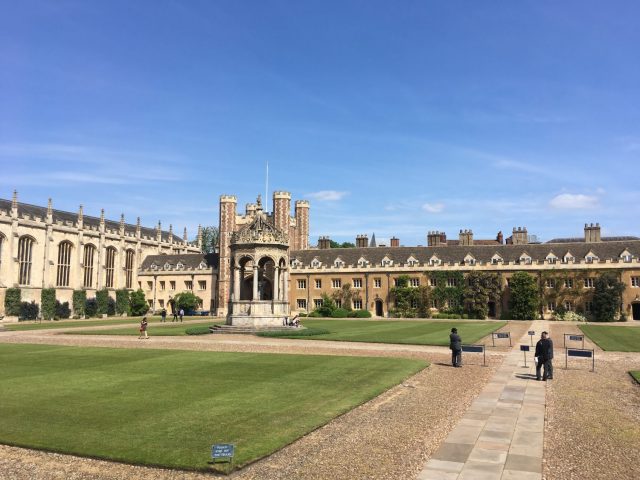 The responses from students about study drug usage falls into five broad categories:

Those who have found study drugs usage to be beneficial – “bloody good stuff”‘, “great in moderation”, “bangin'”.

Those who tried it and found it didn’t really work – “disappointing, not that effective”, “not great, only tried it once”.

Those who are concerned about the effects on health – “messing with the chemical balance of your brain is a stupid idea”, “potentially very dangerous and needs to be addressed”.

Many also see it as cheating and it reflecting poorly on those who take them – “academic equivalent of steroids”, “for people who are too lazy to motivate themselves “, “another example of buying a better grade if you can afford it”, “used by insecure people who aren’t clever”.

And at The Tab we always appreciate the idiosyncrasies of our readers, so here are some pretty unique responses:

“Drugs are for thugs. Don’t be a mug, don’t take a drug. If you take drugs, you should be squished like bugs.”

“Everyone at Caius does it. “.

“Use what Jesus gave you!”

For the upcoming exams, I’m sure that’s as good a motto as any other.