John’s has lowest state school intake – less than half

Living up to the signet ring sterotype

Latest admissions statistics released by the University of Cambridge for the 2017 cycle provides an insight to the state school acceptances by college, amongst other revelatory information.

Unsurprisingly, perhaps, John's has the lowest acceptances of students from "maintained" schools, the term the University uses for Comprehensive and Grammar schools, Sixth-Form and FE/Tertiary Colleges. For John's 48.6% of those accepted were from state schools, as opposed to Churchill, which has the highest percentage of 76.5%.

This is when the 4 mature colleges of Lucy Cavendish, Wolfson, Hughes Hall and St Edmund's are excluded, as the majority of the applicants (and acceptances) there are not home students. Thus differences of one or two applicants will have a disproportionate affect on the percentage. 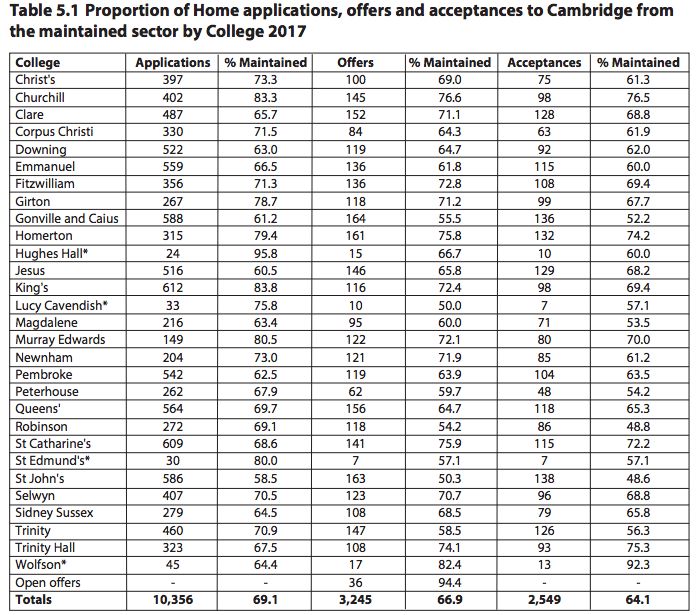 This appears to provide some factual basis for the stereotypes that are often heard in Cambridge, that John's is posh, or Caius is Tory, and that Robinson is full of public school students.

The statistics do not seem to be a surprise from students, with one John's student remarking "classic John's" and another student saying that although there were unaware of John's reputation when they applied, it has become very obvious over their time at Cambridge.

An interesting trend seems to be that the older, and perhaps considered more traditional colleges, have a lower state school intake compared to the newer and more modern colleges. Perhaps, more students from state schools are put off by the more traditional atmosphere, or that the stereotypes are self-perpetuating.

St John's College has told The Tab "We are committed to widening participation and continually review the effectiveness of our extensive outreach initiatives, but there is still work to be done to show that St John’s is open to talented young people regardless of their background. We would encourage anyone who is interested in studying at St John’s to come to one of our Open Days, Taster Days or Study Days to find out what life is really like at our welcoming and friendly College. Visitors can also drop-in to our Admissions Office between 10am and 4pm Monday to Friday."