Friday nights in Cam are not usually spent stalking a Russian man after the brutal death of his wife and kids in a plane crash. Yet my 7pm date with My Eyes Went Dark was well worth it.

Just a week ago, this caterpillar of a performance had just started rehearsals. Out of its cocoon has emerged a spellbinding and frankly stunning play which was sincerely the best piece of theatre I have seen in Cambridge. (And no, my cynical amigo, I’m not mates with any of the cast).

Composed of one actor and one actress, Nikolai Koslov (Jerome Burelbach) and Marya Koslov et al (Mollie Semple), the play is unusual. Both actors skilfully mix passionate drama with delicate asides. Burelbach captures his character perfectly from the get-go, and his lines are frosted with a superb soft Mitteleuropa accent which adds a child’s pencil-case of colour to the troubled Russian. Flitting between multiple characters is a job even a West End veteran would struggle with, but Semple does it with class. Her casual dialogue with Nikolai especially during the intimate scenes is pitch-perfect.

Generally the actor/actress rapport is capital-O Organic, producing some top-class extended dialogue that was riveting to watch. One episode, where Nikolai leads a young girl around his house, is almost worth the £6 fee itself. 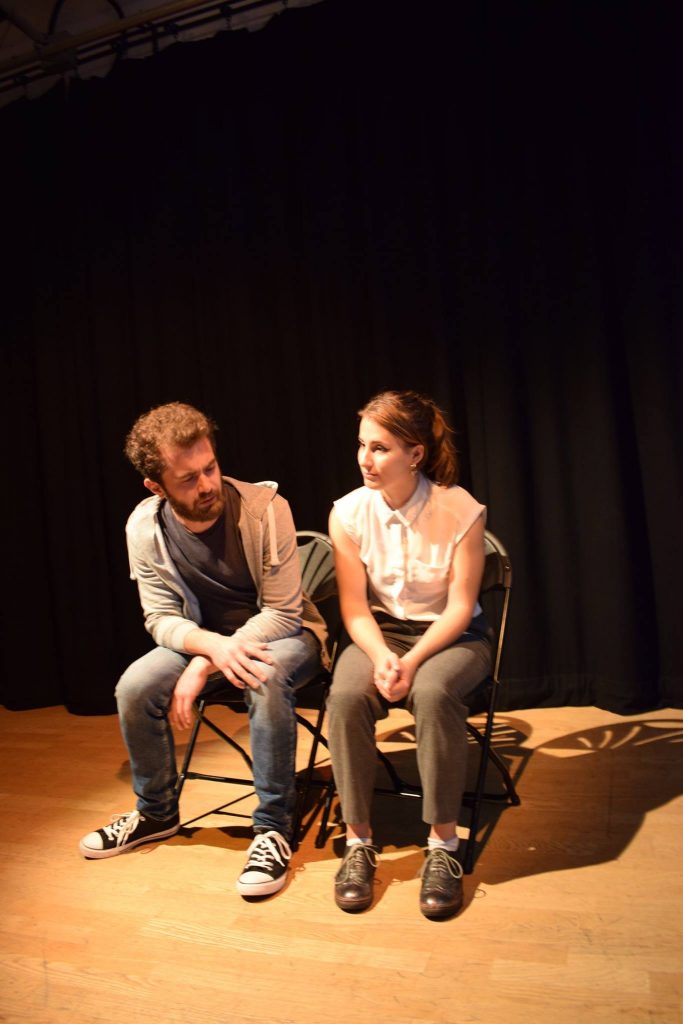 The acting quality is equalled by the tech. The sound engineering is incredibly atmospheric, adding an intense fug to the stage despite a drought of props. Softly trickling water and birdsong captured a rural Russia to perfection, and the plane noises served as an impressively sharp signal of scene change. Lighting visuals are all A1, and the use of reds and greens is a profitable innovation by lighting designer Daphne Chia.

The use of levels is also a slick asset to this play. A dejected and depressed Nikolai slumps low in the chair at the start, circled by Semple as alternating lawyer, corporate hack, and shrink. Later we see Nikolai standing, confident but driven by anger. If this is a conscious choice, it is a clever one.

Lastly, snappy dialogue and even snappier scene-switches make the production super clean. Running time is around 75 minutes, which sparks suspicions that the play carries a thick midriff of verbal flab, but the script is a lean and low-fat product. This was much to the pleasure of some audience members who are partial to a Thursday Lola’s (I spotted no one dozing off.) Credit here to the director Oliver Jones. 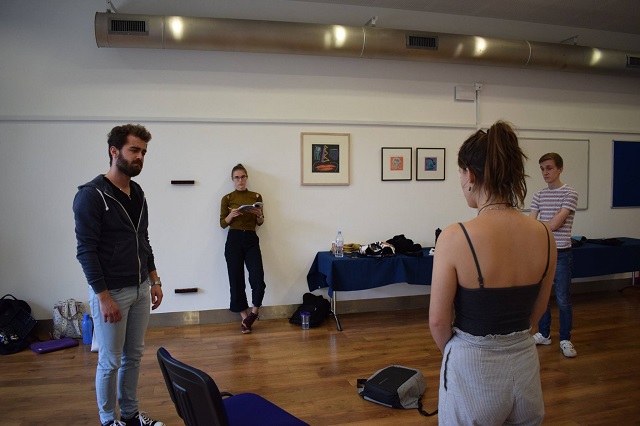 Rehearsals for My Eyes Went Dark

Glitches, like giant pandas, were rare but present. Delivery is a minor issue at the start. Burelbach mumbled a bit into his rather impressive beard, which meant the endings of some sentences were lost. Semple felt a little too ‘jilted BBC newsreader’ in her initial slow monologues. The harsh white backdrop is deliberate but I feel, given the strongest scenes are in Ossetia, a splodge of rural-Russian green would be a welcome addition to the palette. All these, though, were the personal opinions of my hyper-critical eye. I’m sure some will sneer that a 5* performance should be flawless, but, as the play reminds us, even Jesus himself walked the Earth with scars on his body.

Masculinity and its troubled relationship with emotion are currently a hot topic in Cantab discourse. My Eyes Went Dark responds to the trials of the alpha-male Russian man in interesting ways: sympathetically, coldly, financially, and with violence.

So, My Eyes Went Dark is difficult theatre. Difficult theatre does not usually prosper in Cambridge – either it is avoided by thesps as it will not pull audiences, or it is cursed with a cancer of extreme edginess that gives the cast a collective amnesia such that they forget the whole point of a performance is to tell a story.

Given the quality of this production it is a shame it was relegated to the Corpus Playroom over its big brother. Even if your blood type, like mine, is not ADC-positive, this play is a must-see. It is bloody intense, but so is your DOS, and you pay 9 grand, not £6, to see them. Bargain, to be honest.