It’s a big one

THE HOOSIERS will be headlining Christ’s ‘Biophilia’ May Ball

Best known for their killer indie disco floorfiller singles ‘Goodbye Mr A’ and ‘Worried About Ray’, the Hoosiers will be causing a rumble at Christ’s on the 14th June.

The Hoosiers have a hefty discography of five albums, including their 2007 debut ‘The Trick to Live’ which rapidly rose to number one in the UK album chats.

Joining the Hoosiers on the 14th June will be the Gentleman’s Dub Club – a Leeds based, nine-member dub band. Having built a reputation on consistently delivering one of the most energetic and exhilarating live shows to emerge from the UK bass music scene, the Gents’ have astounded crowds at festivals including Glastonbury, and Bestival, as well as supporting artists such as Roots Manuva and the Streets.

The Carnabys will also be playing Christ’s May Ball. The Carnabys are an up-and-coming indie rock band, who released their debut album ‘No Money On the Moon’ in 2014. Debbie Harry (Blondie) has described the Carnabys as “The Best Support Band We’ve Had In Years” .

Also appearing at Christ’s May Ball 2016 are the Fruity Clave Samba Band – a Brazilian-rooted band, guaranteed to bring a vibrant carnival atmosphere, and a DJ set from Zkeletonz. Christ’s May Ball team have also secured a range of Cambridge-based artists, such as Natasha XH, Olsen Jazz Band, and Christ’s own Robin Lamboll. 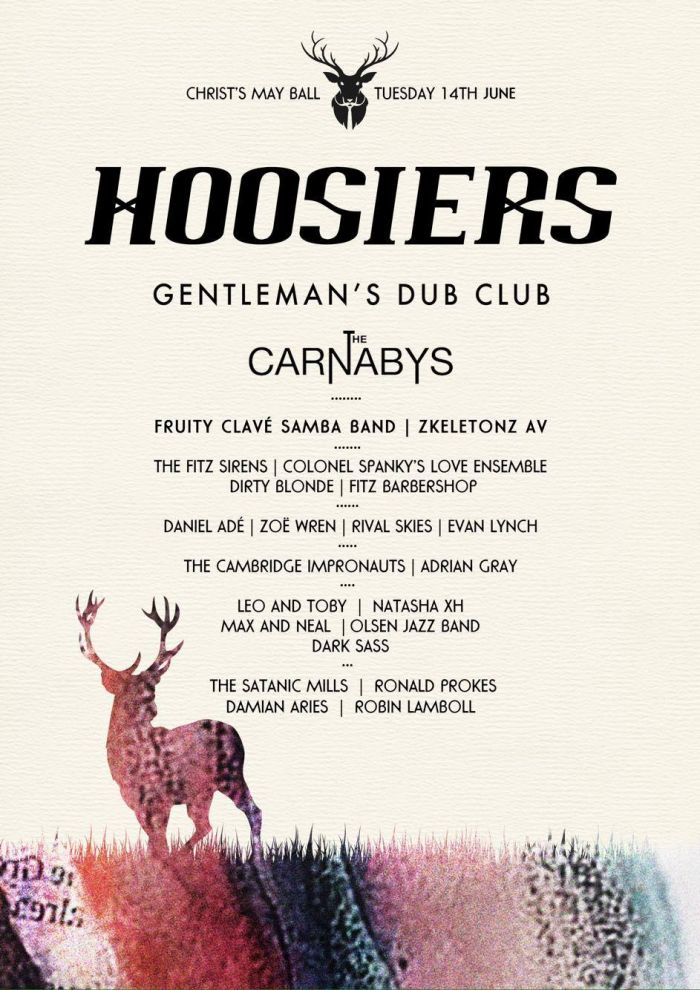 With such a range of genres and atmospheres, Christ’s May Ball is guaranteed to please a number of tastes. The Tab Music believe that this will be a hard line-up to beat, so take a chance if you come across a spare Christ’s ticket – this is really not an event to be missed!

Remember to keep checking The Tab Cambridge for other May Ball announcements.

The discovery was made during ongoing excavation at the College, ahead of the construction of their new accommodation block

Her ‘retirement present’ of £80,000 will pay for the £10,000-per-year living costs of two students for the full duration of their course

Quick and easy dinner recipes to fuel that big brain 😉

The trip will run from the 3-11th December this year