Laura Batey’s The Merrier, a spunky piece of new writing centres on the reunion of seven Oxbridge graduates, over a booze-fuelled evening of uneasy exchanges and painful revelations.

From the snappy sparring at the opening of the play, to the painfully awkward but amusing reunion between the lesbian and Chaplain that followed, the first half of the play was a laugh-a-minute. 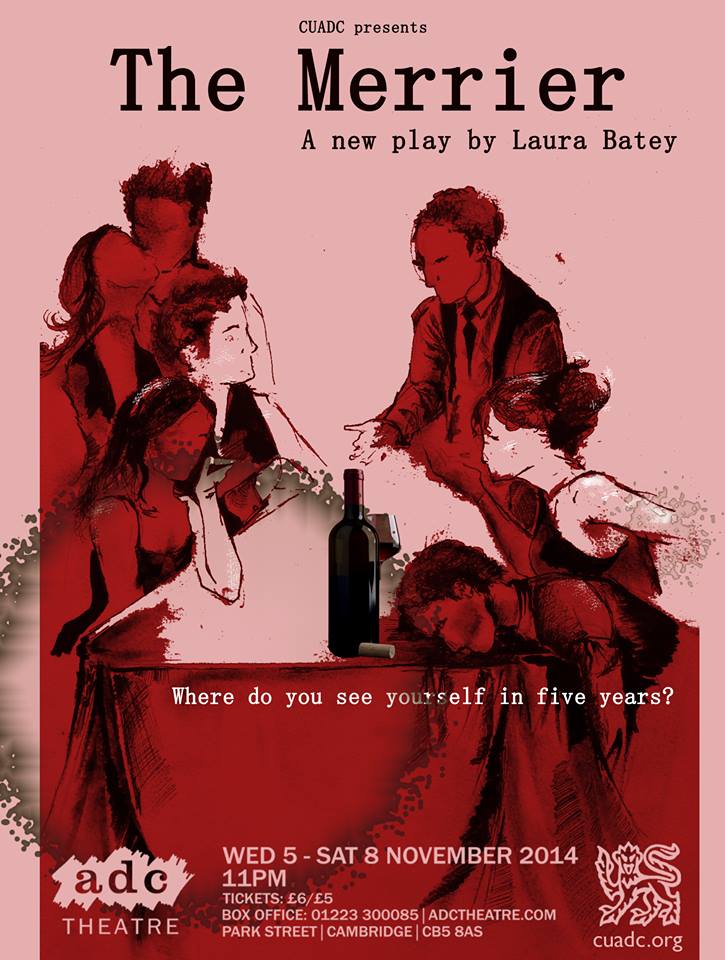 Fran (Clara Strandhoj) and Patrick (Tom Stuchfield) bounced off each other, with an exceptionally charged interaction from both sides. Indeed, Strandhoj’s performance remained unfalteringly energetic throughout the whole production, an asset that is especially valuable in a late show.

When Strandhoj and Stuchfield are joined on stage by Rachael Naylor, who plays Louise, the quintessential thirteen year old, her presence adds a refreshing diversity to the cast. She provoked a lot of laughs from the audience, especially when joined by Tim, the sexually-errant Chaplain, played by Ben Hawkins.

Indeed, the delightfully awkward exchanges between Hawkins and Naylor were the real highlight of the night: these were moments of hilarious writing, brilliantly executed, and thoroughly enjoyed by all.

In fact, one member of the audience (who incidentally appeared to have consumed the equivalent of his own body weight in mulled wine before entering the theatre) barely stopped guffawing from this point on.

The cast managed to stay unaffected by an unusually rowdy audience (well, it was bonfire night after all), which displayed a level of professionalism to be admired.

The second half of the play took a darker turn, with confessions and insults pouring out as freely as the wine. Indeed, this sudden change of tone was perhaps the only flaw in the play.

The writing at times seemed a little disjointed and confused here, with the switch from the persistent comedy of the first half to the fraught and harrowing revelations of the second seeming a little too abrupt.

However, on the whole the cast and crew pulled it off;  the acting, especially from the female members of the cast, was exceptional. Amber Dillon’s portrayal of Bex was natural and lively, whilst Helena Fallstrom gave a wonderful portrayal of a feisty feminist.

The set was well thought-out, with different levels and lighting used to split the stage into two distinct areas. The musical interludes between the scenes gave a nice touch of fluidity to the production as a whole.

The Merrier is fun, moving and hilarious, with commendable displays of dramatic talent throughout.

With week five drawing in, I’d thoroughly recommend this corker of a play: it’ll make you laugh, I promise.