A one off stand-up show loosely themed around disability, Comments Disabled offered an enjoyable evening that was the right balance between light-hearted and thought-provoking. 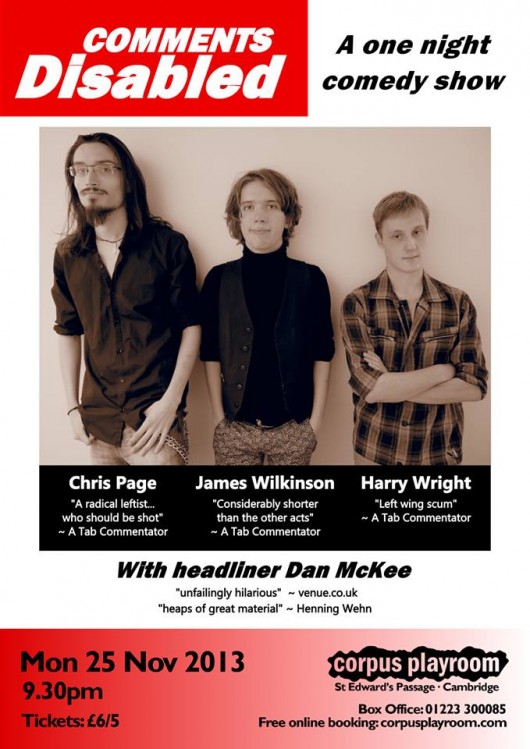 Footlights favourite James Wilkinson was our compère for the night, and warmed up the audience with tales of his degree. Whilst theology wouldn’t spring to mind as the funniest of subjects, Wilkinson is a master of finding comedy in the everyday. We were treated to anecdotes of female-friendly scripture, the difficulties of recognizing a zombified Jesus and the ultimate procrastination pastime of bible browsing.

There’s no denying that disability is a bit of a touchy subject, even in a place like Cambridge where we’re all supposed to be liberal and accepting budding academics. However, as tonight’s comedians didn’t fail to point out, it’s very easy to make a faux pas. Wilkinson’s quip, ‘I bet you don’t know what the inside of a disabled toilet looks like’, was met with chorus of guilty giggles. But none of this evening’s performers preached or moralized, and instead disability was absolutely fair game for jokes. At no point did laughing along feel awkward.

The first act of the night was Harry Wright, a self-proclaimed autistic English student, who was charmingly funny. Drawing on his childhood visits to the psychiatrist, Wright played out a witty ‘autistic screening’ of a film, complete with facial expression flashcards – not only funny, but also illuminating.

Callie Vandewiele was next up, and her quips were largely centred around the cultural differences between Britain and America. Whilst some of her jokes had people chuckling, on the whole there was nothing hugely original to her set. The fact that the classic ‘are your pubes ginger too?’ jibe was repeated only minutes later by another act was evidence of this.

The final student act and V for Vendetta lookalike was Chris Page, described charmingly by a Tab commenter as ‘A radical leftist…who should be shot.’  He admitted that his Marxist sympathies have softened, instead pointing out that the iconic Communist was, incidentally, a raging alcoholic who rather liked to climb up lampposts. Page had a good few jokes for us on the delights of death metal and the academic merits of pornography.

Headliner Dan McKee was the final act to take the Corpus stage, and he had a tough act to follow. As a professional comedian, McKee was as funny as we would expect, but he didn’t seem to be leaps and bounds above the others. He drew on his Asperger’s syndrome and preference for the literal, waging war on the misuse ‘literally’ and phrases like ‘that’s so random’. McKee was very entertaining, but notably the student acts, as would be expected, knew their audience a lot better, and their material and the response it received reflected this.

Comments Disabled was mercifully free of the Tab bashing we were led to expect, and thus we could enjoy the evening in peace. With the profits going to MIND, it was well worth seeing and showcased some comedic talent that made us laugh and think.