LEAF ARBUTHNOT is happy to report that not all films about old people in Paris end in assisted suicide. Even more encouragingly, this one features Jim Broadbent smoking the ganja.

Films about old age can be ruthlessly depressing.

Amour, last year’s Oscar-nominated French hit, is a good example – whilst rendered bearable by pristine performances and an entrancing, trickly rhythm, it offered an indelibly sobering cinematic experience. I emerged from the Picturehouse stimulated and impressed, but also determined to visit Dignitas before my 70th birthday.

Le Week-End, however, offers a more cheerful and, I’d wager, more accurate, vision of elderliness. Nick, played by a dishevelled Jim Broadbent, has persuaded his wife Meg (Lindsay Duncan) to spend their 30th wedding anniversary in Paris. The film starts off on the Eurostar, with the camera sucking backwards through the carriage, past an everyman rearranging his luggage and a girl listening to her iPod. Finally, the central couple fill the shot and off we go, the dialogue starts, sliding serenely between snide bickering and comfortable chitchat.

These opening shots set the tone for the rest of the film, with the relationship between Meg and Nick forming the main intrigue. As anticipated, theirs is by now a sexless marriage – but not bereft of warmth, with both characters being intermittently moved to kindness and laughter by one another’s behaviour. For all the vintage of the relationship, it also seems intriguingly unstable – at one point, Meg asks her husband to kiss her, while minutes later, pushes him over on the street, leaving him to creak to his feet unaided.

It’s this attention to human complexity and unpredictability that saves the film from cliché. Yes, it’s about a romantic getaway to Paris, but it’s also about the underlying futility of the very concept of ‘getting away’. Yes, the film underscores the physical shitshow that old age entails, with Broadbent constantly complaining about his bad back and knees, but it also shows that elderliness comes hand in hand with immaturity. While the central couple might indulge in ‘old-people’ activities – visiting churches, shunning modern restaurants, sipping cappuccinos in stony silence – they also act like teenagers. In one particularly fun sequence, they dine in an oyster bar only to sneak out to avoid paying the bill. And later, in a strange scene set in a swanky apartment on the Rue de Rivoli (perhaps the film’s weakest half hour), Broadbent indulges in a quick spliff. 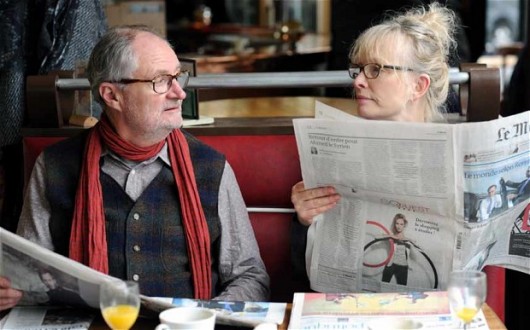 The look of love

It is, of course, easy to render a film beautiful when it’s set in Paris, as this one is in its entirety. And the movie certainly takes advantage of the setting, with practically every major landmark appearing at least once. Yet unlike many other cinematic love letters to Paris, the city is rendered sporadically seductive and alienating by the central couple’s changing reactions to one another – the capital might be the city of romance, the director suggests, but its status as such is contingent on individuals’ experiences within it and with it.

Like with Amour, the performances are difficult to fault. Broadbent’s character is perhaps an easier gig than Duncan’s, whose ambivalent attitudes towards her husband are left tantalisingly knotted, but both feel authentic. Whilst I emerged from the cinema somewhat saddened, I also came out feeling exhilarated and moved. Not to be missed.