The Occupation – A Guide for Dummies

At 7am this morning, Police were called in to end the week long occupation after the University slapped a court order on Defend Education.

After nearly 8 days of uncertainty, the stand off ends in protestors being forcibly removed by University Security and West Midlands Police.

To make the confusing and highly emotionally charged situation easier to understand, and in case you missed it altogether, we have compiled a ‘Guide for Dummies’ of the occupation in the form of a timeline of events.

The University of Birmingham received criticism from Amnesty International in 2011 after obtaining an injunction against all forms of occupational protests after Defend Education sat themselves down in the Corporate Conference Centre.

The protest, which made a stop at a disciplinary hearing for Defend Education member Simon Furse, only lasted a day before the occupation was broken up, but Defend Education claimed: “This is just the beginning: we will be back.” The group claimed on a Facebook group that “Together we can save education and the welfare state from the Tories.” 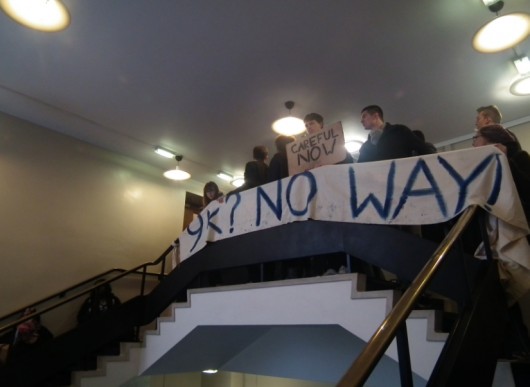 Over two years later, Defend Education followed through with their Schwarzenegger-like promise, and were indeed back. Hattie Craig, Simon Furse and an unknown other barricaded themselves into the Aston Webb building’s senate chamber, triumphantly tweeting their achievements, and their aims “against regressive management and for greater democracy in our uni.” 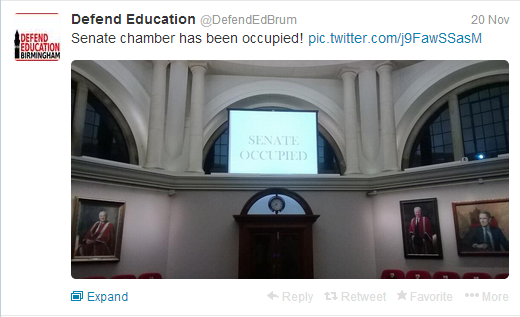 Students start to get worried about the occupiers’ welfare.

They must have been bursting.

The nature of the toilet was never revealed. (Hopefully the lecturn wasn’t used as a urinal.)

Turns out they had time for games however, tweeting this naughtiness: 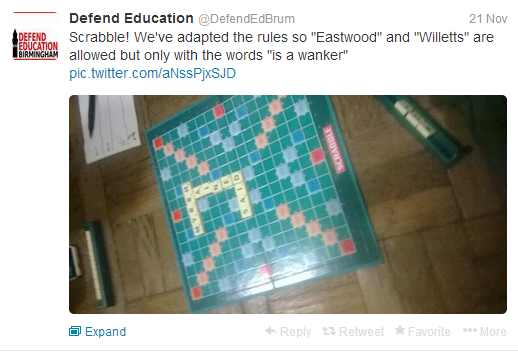 Eastwood is a wanker comes in at a huge 28 points. Domination.

Massive oversight though. There’s a huge projector in that room. I’d have lent them my PS3.

Things start to get weird. The occupiers believe that security have somehow taken their banners from through a locked door, and appear to have cracked under the pressure…

The university goes into ‘lockdown’ as 50 or so protestors meet under the clocktower. Politics legend Peter Kerr is locked in a café as he is told it’s too dangerous to go outside.

Tetris Tim, the university’s 11 year prodigy, comments some of the protestors don’t even go here.

She doesn’t even go here.

The university security attached a summons to court for Hattie Craig and Simon Furse, and in doing so opened the doors to the senate. Cue all the protestors charging into the chamber. 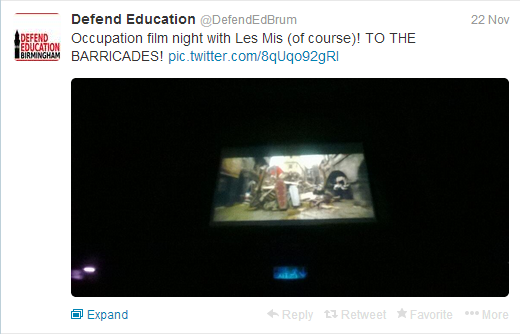 What a sweet deliciously chocolately world that would be.

Simon Furse confronts Director of Academic Services Brendan Casey, asking him if he feels good about being “in the same camp” as dictators around the world.

Hattie Craig and Simon Furse head down to court. After having complained about the university wasting £10,000 on an injunction, they find out they are personally liable for up to £25,000 of the costs. Yikes.

In a statement of support, the NCAFC said: “we also demand that Hattie Craig and Simon Furse be free of any cost, financial or otherwise, related to this injunction and that the University pay for it out of its own deep pockets.”

Meanwhile, their disruption continues to affect some of the 26,000 other students as they stay in occupation. 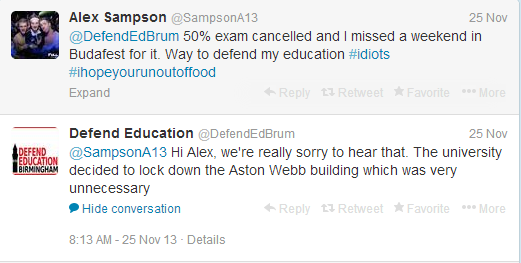 To be fair, at least you didn’t have to do the exam.

Police begin prep for forcibly removing all occupants from the chamber, as the injunction calls for the removal of all “persons unknown” who have stayed in defiance of the injunction. 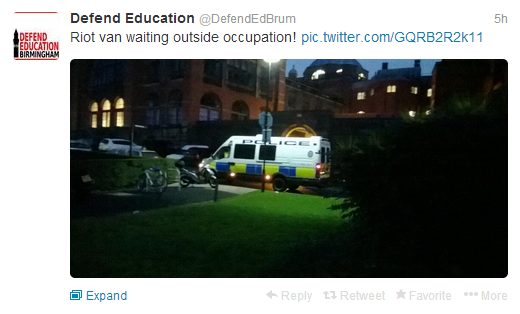 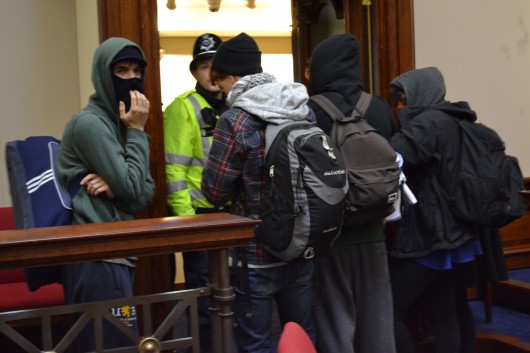 Occupiers cover their faces from the bitter cold of the senate chamber.

At 7am, police and bailiffs force entry to the senate chamber and remove all occupier, but Defend Education remain optimistic.