Hate crime against Asians is on the rise in Britain, and Asian Notts students are no exception.

Since the outbreak of Covid-19, Asian students at Notts have experienced increased levels of racism. The Tab spoke with Asian Notts students to find out about their own experiences of being profiled as coronavirus infected.

Asked about why Asian students may not like to use their real names, an exchange student suggested that the community did not like or want to “stir sh*t up”. But he added that “it’s sad we don’t stand up for ourselves and let them walk over us like that.”

Empirically, it appears that Asian students are fearful of speaking up about racism. Many students passed on the opportunity to share more details with The Tab after disclosing that they had been on the receiving end of hate due to their Asian heritage. For those who did share more, the majority added something to the effect of that what happened to them “wasn’t too bad”.

Jessica was walking with a friend who was wearing a mask by Asda when “a few college-aged guys who were smoking” coughed into their faces. Later that same day, a middle-aged lady shouted at the pair “take your masks off when you are in the UK!”

On a different occasion, when Jessica boarded the tram, a middle-aged man murmured “Corona got on”. Furthermore, during the journey, an elderly couple (mistakingly assuming Jessica was Chinese) purposely began to start talking in front of her about how bad and disgusting China is.

Jessica says she’s used to this sort of thing. Speaking to The Tab, she said, “Every time I go out of the campus area, I am already prepared to face at least one racist encounter.

“It’s really stressful and it makes me distrust others, especially locals because those encounters were caused by locals. However, I don’t think all locals are racist. It’s only a small portion of them.

If you're concerned about Coronavirus 2019-nCoV, we ask you to remain calm and follow these precautions from @PHE_uk #Coronavirushttps://t.co/i8M5kVRMFt pic.twitter.com/i6G5VCxJgw

Henry, tired after arriving in Birmingham on a long journey, revealed to The Tab that he experienced racism from a member of staff working for Jet2.

“As I went through the customs exit there were 5 Jet2 cabin personnel, one male member, the rest female.

“The male member first looked at me and gestured to his colleagues, I briefly caught his gaze and he started imitating a few sneezes and coughs.

“I didn’t engage with him because I was too tired and I knew nothing good can come out of it.

“I walked behind them initially but he carried on with his mockery, I thought I should outpace them because it was starting to get uncomfortable.

“As I outpaced them, and crossed in front of them, he hurled some racial remarks at me, I was too distraught to remember what he said exactly but I remembered it was racial.”

Henry reports that the abuse lasted quite some time; from the exit of customs to the rental car kiosk.

Henry reached out to Jet2 to report the incident on social media but decided to not pursue the matter further after he was asked to send an email.

Speaking about his feelings around the incident, Henry said, “While it is not okay for any person to behave in that way, it is disgusting for a flight attendant, in his uniform, to behave in this way and acted out his prejudice in an international airport.”

Henry hopes the abuse will end for Asian students. He said that “it would be sad” if incidents like this continue to happen, and he urges students at Notts to “be kind.” 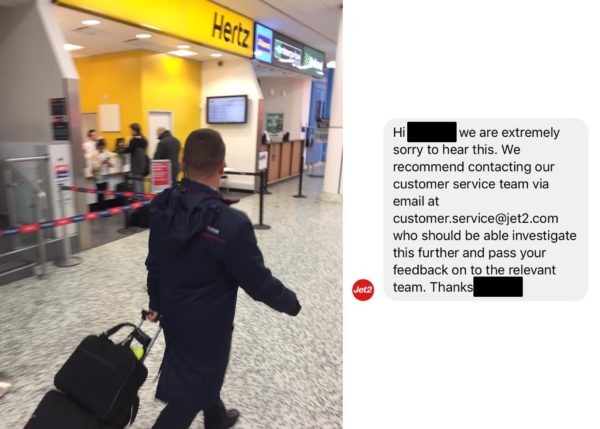 An image Henry captured of the staff member and the message he received after reporting the incident to Jet2 on social media.

Kim has experienced three separate instances of verbal attacks since the outbreak.

The most recent, she was with her friends, walking down the street, when a car drove past them. The driver yelled racist slurs, mentioning coronavirus, before spitting on the ground.

The first coronavirus-related incident she experienced was in January, near the beginning of the outbreak. She was walking to Broadgate Park when a large group of kids on bikes came up “really close” to her and repeatedly asked her if she had coronavirus.

And the other, to date, was on University Park campus in David Ross. After finishing with the mat, she offered it to a guy who needed one. He rejected it and so she put it back on the rack. When she was walking away, she heard him say to his friend, “best keep clean from corona.”

Kim said the experiences made her a “little upset” and that she “didn’t wanna make it too big of an issue.”

Likewise, Sarah said what happened to her was “nothing too big”. But she added, “it made me feel a bit targeted for the colour of my skin when they don’t know anything about me.”

Sarah coughed on the tube in London, causing a sizeable group of people to move away from her. Meanwhile, back in Notts, some people on her course, who she doesn’t “even know that well”, joked that she should not touch anything because she will infect it.

Many students, who said they did not have an “interesting” story to share, reported similar events occurring to them since the outbreak. Most notably, strangers now stare at them disapprovingly when they sneeze and people will constantly make jokes about how they have coronavirus because they are Asian.

Asians in Britain are on high alert, and so are their families. One student mentioned his mother was keen to fly him home early out of fear for his safety.

Students can report hate crimes to the police through True Vision if they wish. This may result in the police investigating further. Moreover, students who have been a victim in any hateful incident are able to contact the university’s Support and Wellbeing Officers.