During winter graduation, a student from The University of Manchester was awarded her degree certificate only to find that she had been awarded a "Bacehlor" of Midwifery.

There are about 50 people on the Midwifery course who are all believed to have received a certificate with the mistake.

The Tab approached the graduate for a comment about UOM's spelling blunder: "It was definitely everybody on midwifery [that was given a 'Bacehlor' certificate]. It's so funny because they did the big speech about how amazing Uni of Manchester is.

"Our lecturers saw and said they are making a formal complaint." 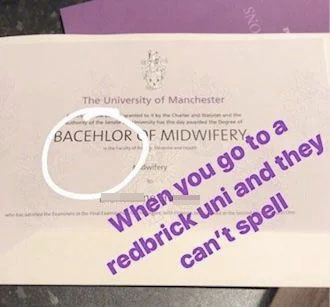 Despite the mistake, the graduate went on to tell The Tab: "Most of my friends just found it funny, nobody seemed annoyed."

It is yet to be confirmed if the degree certificates will be replaced – until then, you probably don't want to hang this one on your wall.

A University spokesperson said: “We’re sorry for this mistake and have already reprinted the certificates. Everyone who has been affected should receive a new certificate very shortly.”

There has been an outpouring of support over the defaced mural

Over 4,000 people have now signed a petition against it

But it’s 104th for student satisfaction

‘I was sexually assaulted in halls, and now MMU is letting him return to campus next year’

Tickets go on sale from 10am this Thursday

This is, in the most literal sense, a ‘Pub Quiz’

There’s been a ‘terrifying rise in antisemitism in Manchester’, charity says

Jewish residents are ‘concerned for their safety’

And our top tips for securing a spot

Masses showed support for Palestine in Manchester over the weekend

Here’s to hoping we don’t see a fourth!

The occupiers say they will now ‘escalate with new radical tactics’

Students were protesting the University’s handling of the pandemic

Manchester Uni collects up to £146k in drugs fines, but spends £1k on drugs education