A 2007 email uncovered by Buzzfeed shows that some UCL officials were aware of concerns about data fraud in scientific papers which had been overseen by David Latchman, more than a decade before a formal investigation was opened into allegations.

Professor David Latchman is a prominent geneticist with hundreds of papers to his name, and oversaw research by scientists at his laboratory at UCL Institute of Child Health (ICH), whose papers have been under investigation.

The email describes meetings with Anasatasis Stephanou, the leader of a research group studying the biology of heart disease, Andrew Copp, then the Dean of UCL Institute of Child Health where Latchman was based and Peter Scambler, the senior scientist at the ICH. These meetings were called after Scambler contacted members of Stehanou’s research unit who suspected that resulted in a paper about heart muscle cells isolated from rats was forged.

In one of these meetings, dated to September 2006, Stephanou, a member of Latchman's research group, told Copp and Scambler he didn’t have underlying data to support a 2006 paper whose results had been called into question. Instead he blamed Lauren Valentim, the first author the paper who had already returned to her home country of Brazil, stating that he had made "strenuous efforts" to contact her about data but was unsuccessful. Buzzfeed News was also unable to contact Valentim 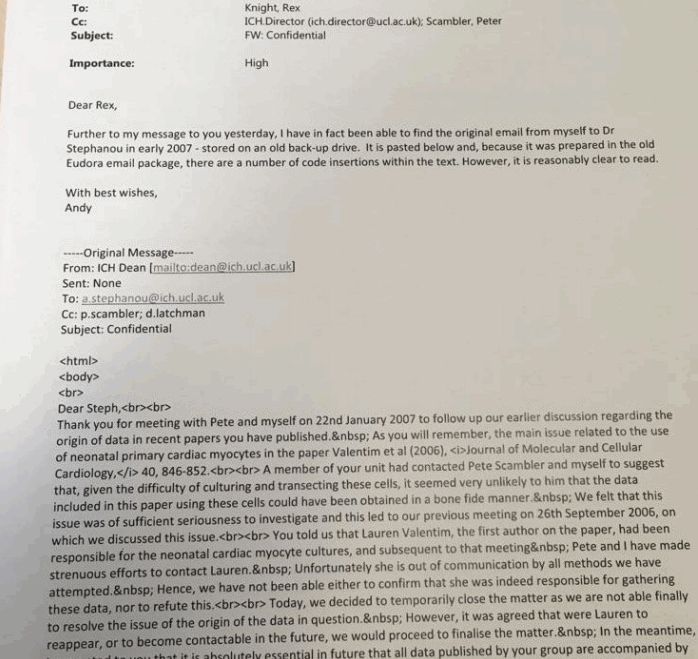 The email also talks about a second meeting with Stehanou in January 2007 where Copp closed the matter and warned Stephanou his explanation wasn’t acceptable. Copp said: "It is essential that everyone who leads a group at ICH is able to fully validate their published data. As a group leader it is your responsibility to ensure that you have copies of all data that support papers in your name."

Andrew Copp concluded that it "seemed very unlikely to him that the data included in this paper using these cells could have been obtained in a bone fide manner" in this 2007 email, sent to Stephanou with Latchman and Scambler cc’d in.

In 2014 Latchman told a panel of three senior UCL scientists that he had no primary data for experiments before 2010 in response to allegations of misconduct in his lab. Instead he blamed researchers like Valentim who had since departed with their data and his laboratory move which had reduced his storage space. This panel concluded in 2015 there was prima facie evidence of research misconduct in eight papers from Latchman’s lab, six of these Stephanou had been involved with.

Despite this damning conclusion, not action was taken against Latchman in 2015.

Only in April 2017 was this email forwarded to Rex Knight, then vice-Provost of operations, who was overseeing the process of instigating further formal investigations of data fraud in Latchman’s lab from 1990 to 2013.

In a disciplinary hearing in September 2018 it was decided that no formal action would be taken against Latchman. Instead it noted fraudulent data could be hard to detect, and urged senior group leaders to consider when they should stop being named on papers.

UCL went on to say that the disciplinary processes into Latchman found there was no deliberate intention to commit misconduct in research and, therefore, there were insufficient grounds for dismissal.

A formal disciplinary process was however initiated against Stephanou, who resigned and left UCL before proceedings could be completed, but denied falsified data. He is now deputy dean of the School of Medicine at the European University Cyprus in Nicosia, and told BuzzFeed News: "I still stand by the results of the 2006 paper."

He added: "I told all individuals working in my group to keep all their laboratory note book/data and to make sure that they leave this with me before departing to another position."

Latchman is the only author in common in all these papers, and the senior scientist responsible for the lab work, yet there are concerns that he has not been held accountable. Instead, in the 2010 Birthday Honours he received a CBE for services to higher education, and as a member of the National DNA Database Ethics Group he advises Home Office ministers on the ethical use of DNA samples. 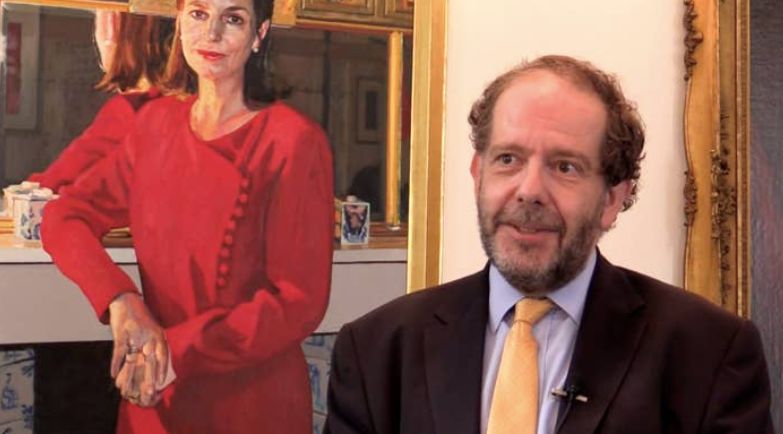 Despite the outcome of hearings, there is ongoing frustration by UCL scientists, with comments accumulating on Latchman’s papers on Pub Peet, a website where scientists anonymously pick apart controversial papers.

So far only six papers have been retracted, and two more were corrected, which do not include the initial 2006 paper which was the subject of Copp’s 2007 email.

The Tab UCL spoke to a UCL spokesperson who said, "As a world leading university, UCL is committed to maintaining and safeguarding the highest standards of integrity in all areas of research.

"We take any allegations of research impropriety very seriously and have rigorous systems in place to ensure that all allegations are investigated thoroughly and that they are constantly reviewed to ensure the highest standards are met."

They went on to state that "Authors and editors of the relevant papers, including Professor Latchman, were directed to correct the record of research where research misconduct was identified. UCL has proactively contacted all journals to ensure that the record is corrected. However, the final decision on whether to abide by the recommendation to retract or correct is taken by the journals themselves."

In his statement sent to BuzzFeed News, Latchman said a “thorough UCL investigation” had already made its conclusions. “The attempts by individual academics at UCL to promote allegations of fraudulent behaviour against the hearing’s conclusions are unbecoming and a breach of confidentiality and good practice,” he said. “Such attempts merely perpetuate a personal agenda.”

Want to break stories like this? Join the team, no experience required! DM us @thelondontab on Insta or The London Tab on Facebook.