“I have housemates from HELL”: Freshers tormented by food thief

One thief is making life a misery for hungry freshers

‘Can I search your room for my curry?’

Like a Jehovah’s Witness on steroids, she knocked on the door of every room in the hallway asking the same, desperate question.

Like anyone steals a delicious steaming kofta curry to leave it under their bed. 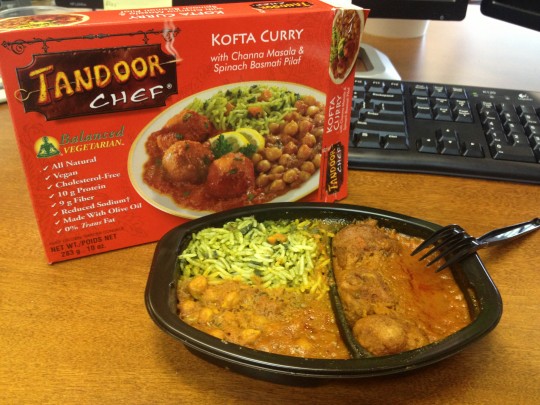 Pass the mango chutney on the left hand side

The girl from next door knew her curry and tupperware box had been stolen, though.

The honeymoon period was now over. No more B-grade small talk about A-levels.

By the time Currygate was reported to reception a week later, no one was laughing.

In just seven days, four ready meals and two cartons of milk had been nicked. Onions and meatballs had disappeared. Half of the kitchen inmates had been affected.

The endemic fostered a culture of culinary McCarthyism, with cupboards padlocked and dry items stored in rooms.

The first e-mail came in from the accommodation warden: “serious action will be taken against the person found responsible.”

The situation was bleak

The threat was toothless. How were they going to find the culprit, sniffer dogs, CCTV?

Even if they set up surveillance equipment, no one’s going to spend hours combing through grainy footage waiting for Sainsbury’s sausage rolls to take flight.

A fortnight into term and everyone had suffered at least one loss.

Either that or people were pretending to be a victim so they weren’t suspected.

Some fools stuck up threatening sticky notes. Yup, sticky notes to stop theft. If they’d only popped a fucking sticky note on the front carriage, maybe the Great Train Robbery wouldn’t have happened.

The notes were predictably thrown away and/or ignored. 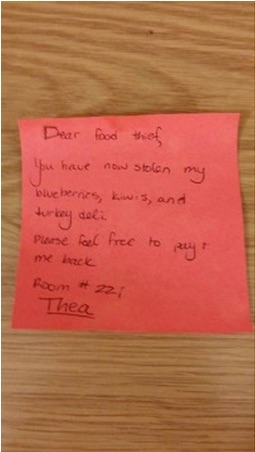 Why don’t the Met use this more?

Now eggs and fruit was soon being taken. It was a hand to mouth existence for most of us – but some one was getting a very balance diet in the meantime.

Then something strange happened.

A ready meal was taken, nothing new, but this time, £4 in change was left on the shelf it occupied in the fridge.

We naively thought this was a watershed moment, but more and more food disappeared.

Upwards of £150 of food had been stolen.

Desperate times call for desperate measures. A meeting was called the wardens. 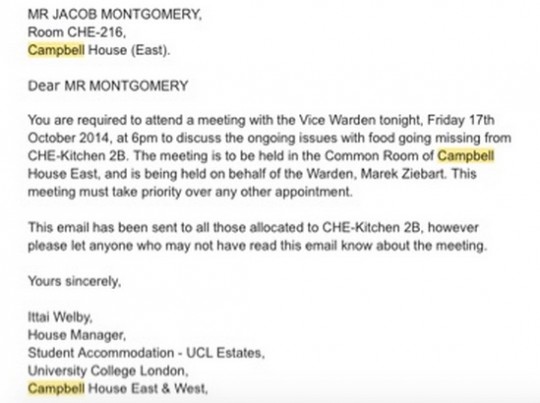 Together we compiled and handed a list to them, detailing everything that had been stolen. We also offered descriptions of tupperware boxes.

Nothing could be done, though, the thief was so good at his job.

We were all looking out for tupperware boxes, but s/he’d probably melted them down to destroy the evidence and sold the plastic.

Thea has had kiwis, avocadoes and turkey deli stolen. She said: “It’s ridiculous, not just because it’s a breach of trust with the people I’m living with, but because my parents paid for me to come here.

They worked hard for me to live here comfortably. The thief isn’t just stealing from me, but from my family as well.”

Some people are less concerned. Eric, whose blue cheese was nabbed, said:

But the thief is still at large, the wardens are carrying out random room checks, the cleaners on red alert.

Something’s got to give.