I Went To A Creepy Toy Museum

And it was scary

One day you might find yourself faced with an empty afternoon, with nothing much to do.

When you find yourself confronted with such a situation, you might start by posing a few questions to yourself: “Shouldn’t I be doing something useful?” “Why not catch up on your work?” and “Don’t you have any friends to hang out with, Hugh?”

Following the brief mental Q&A, you might then decide to go to the children’s toy museum near University (that will remain nameless  because the man behind the counter really was lovely.)

You might then wonder if you’re ever going to sleep again.

To be honest, I should’ve really realised something was up when I saw the outside of the building: 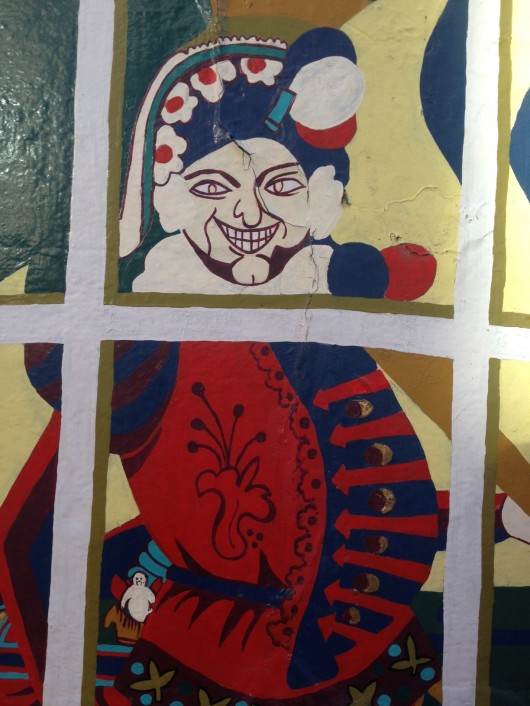 Now close your eyes, scroll down and imagine he’s moving towards you 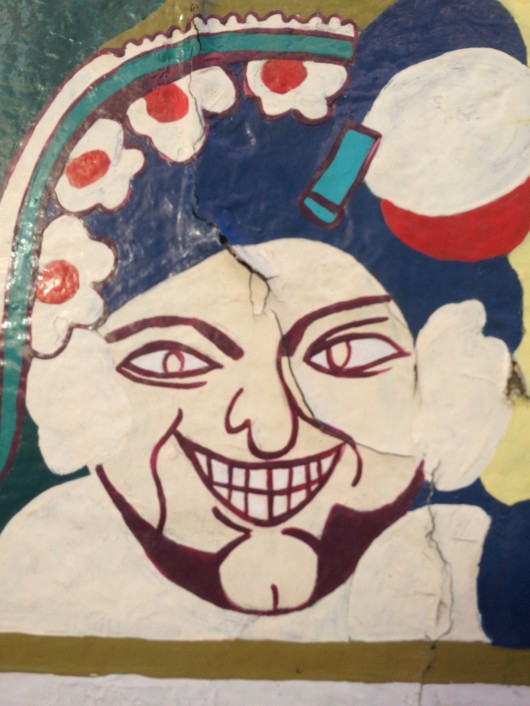 That man does not scream ‘Children’s Toys’ at anyone. He screams: ‘I’ve already got your kidneys!’

Approaching the counter, I handed over a fairly reasonable sum to a man I couldn’t be sure wasn’t going to say something like “be careful what you wish for” under his breath before laughing manically. (In reality, he just asked if I was a student and then gave me a quid off. What a champ)

After entering the door, all the warning signs were there, namely that the  staircase looked like this: 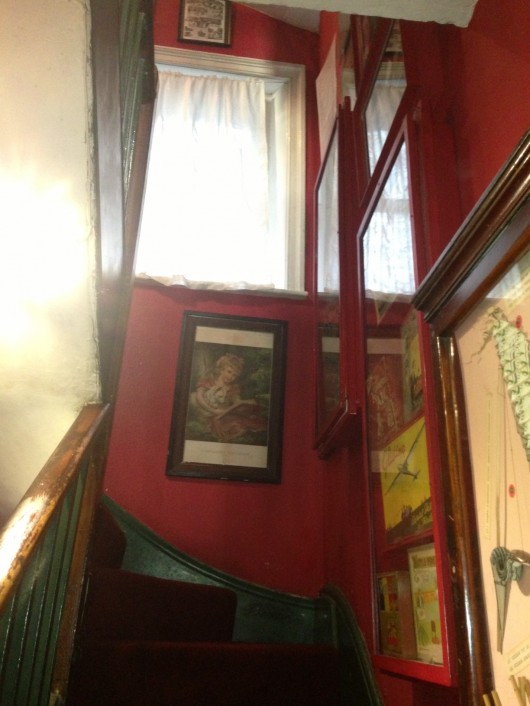 Next stop: shitting yourself

Passing by a few well preserved variations on Monopoly, I began to lull myself into a false sense of security.

“It’ll be fine! You’ve chosen a great way to pass the afternoon you genius. And now you know when and where Monopoly was invented* you’ll be the toast of every pub quiz for miles around!”

But that’s when I saw this: 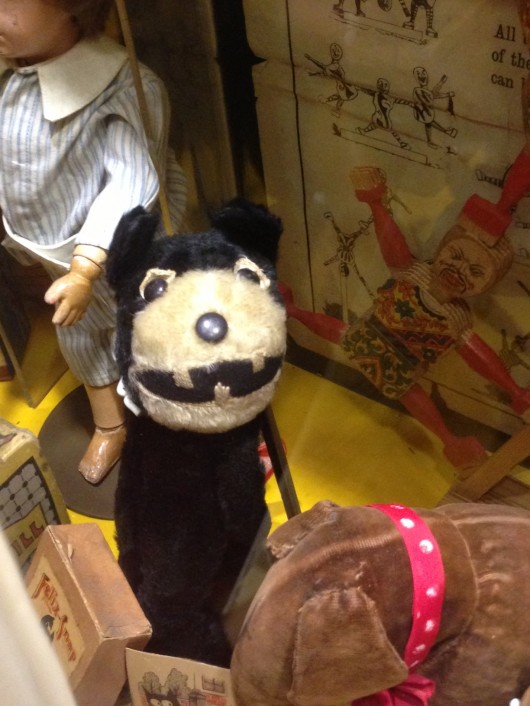 What is that? A bear? A dog? The unholy offspring of the two made immobile by a witch’s curse? 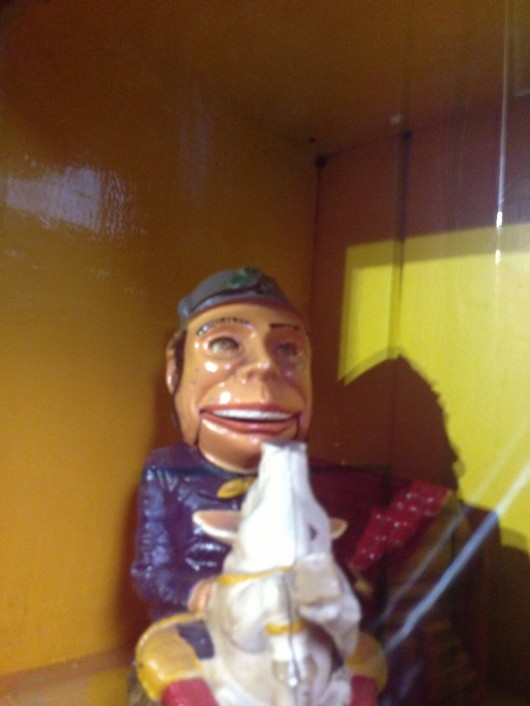 He seemed to be holding a dog against its will in his crotch as it howled in pain/misery. The terror of his waxy face caused me to reel round, where I found myself  looking at the next living nightmare: 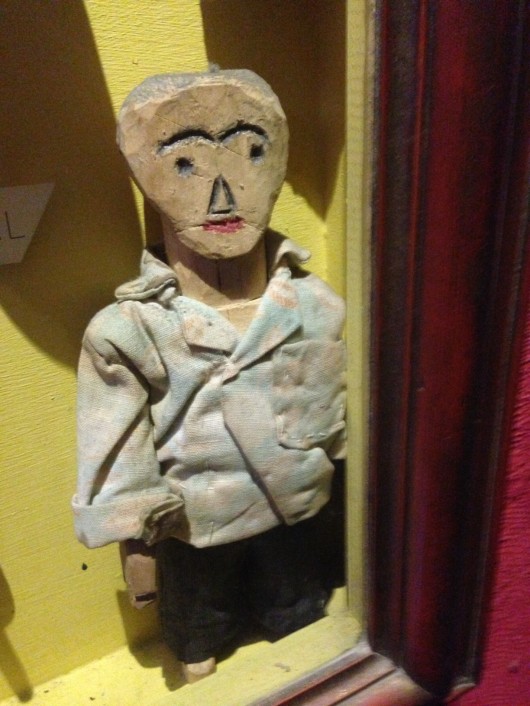 “Hello.” He seemed to say. “I’m lost. I was made many moons ago, fashioned from wood and despair. I’m also bald. Will you love me?”

“I can’t help you!” I shouted, legging it to the next exhibit. I stood breathlessly in the adjoining room, hoping for a respite from the madness, perhaps a series of cases on Boggle or an interactive retrospective  of the history of Bop It!

I was sorely disappointed: 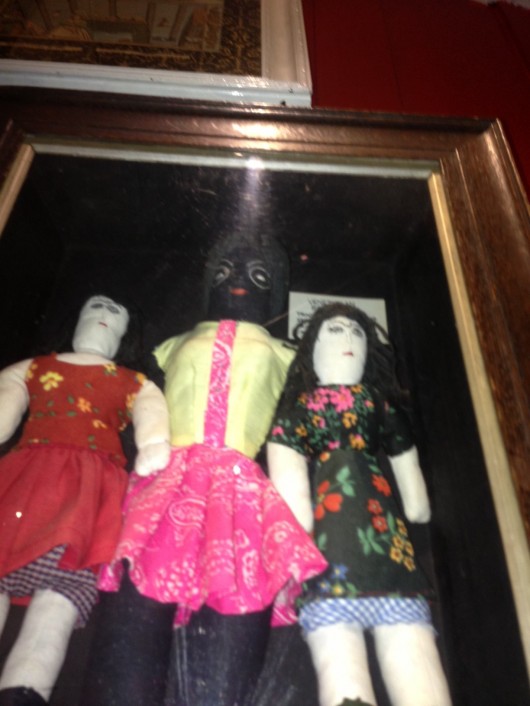 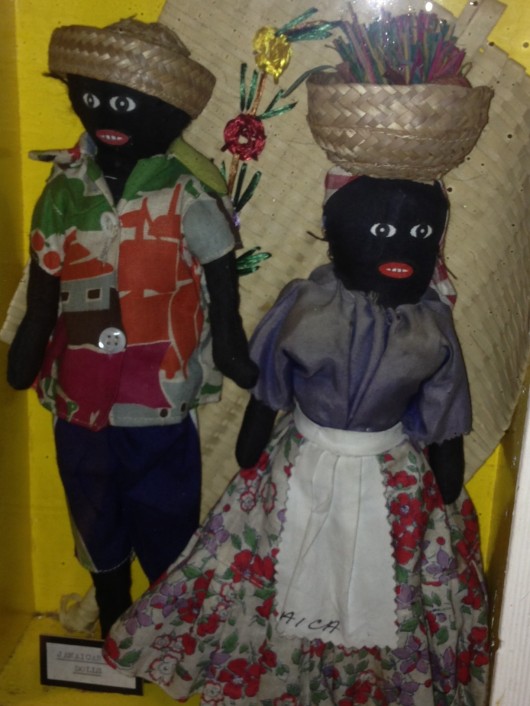 Instead I’d stumbled into the ‘valley of the cloth dolls,’ otherwise known as the creepiest possible place a person can physically go. Near the end of this nightmarish room, I made the mistake of stooping down to tie my shoelace (which was probably just trying to run away). As I bent down I found a little surprise hiding: 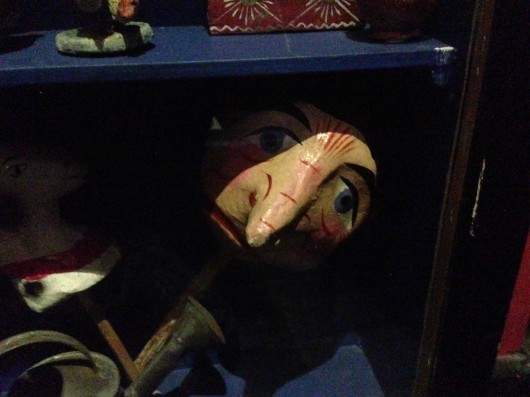 Thought y’ad gottaway? Ain’t nobody gets away from me, child

This delight was in fact the entrance to the mask room, a name to strike joy into the hearts of children everywhere. 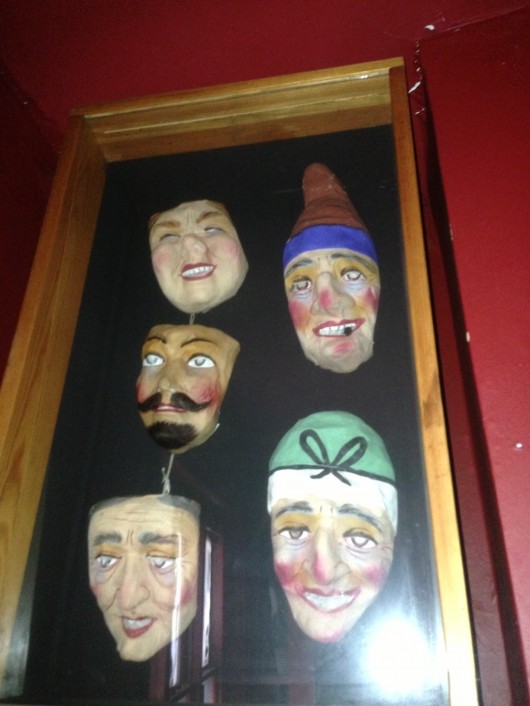 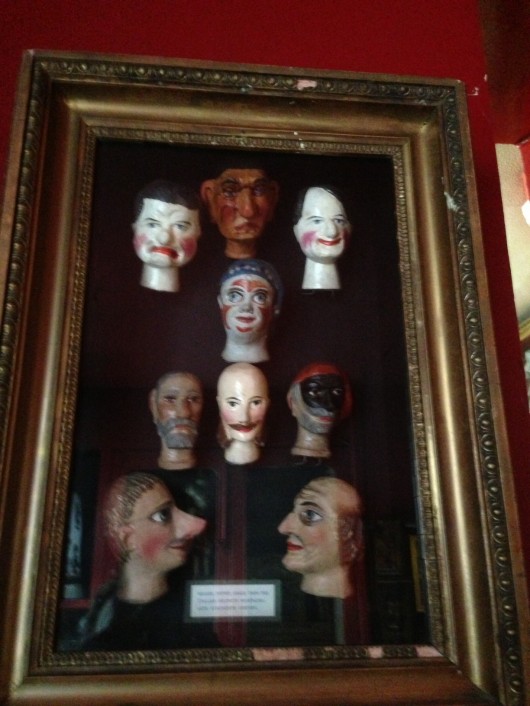 Let me just zoom in on that one for you: 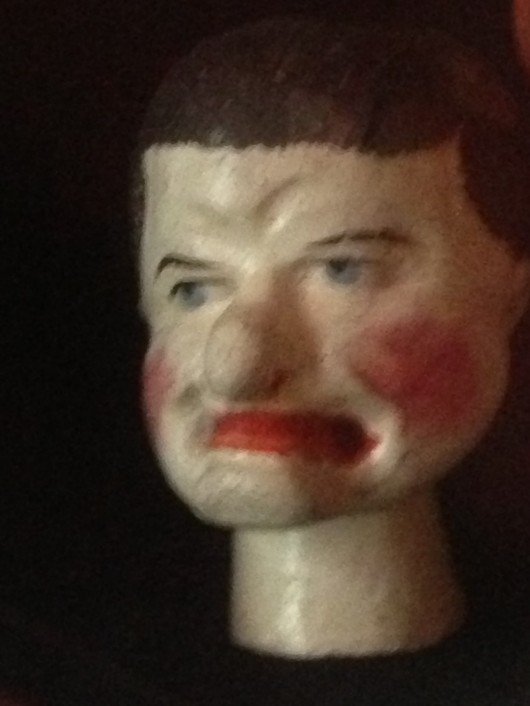 May I remind you that at this point not only am I knee deep in that curry I had two days ago but I am also in A CHILDREN’S TOY MUSEUM.

That means at some point in the history of the world some oldey-timey executives sat around, and said to themselves:

“Yeah, this is what kids like. This is what they love: asymmetrical gurning people with rosy cheeks. Pass the laudanum.”

Anyway, I was near the end of the exhibit. How much worse could this get? 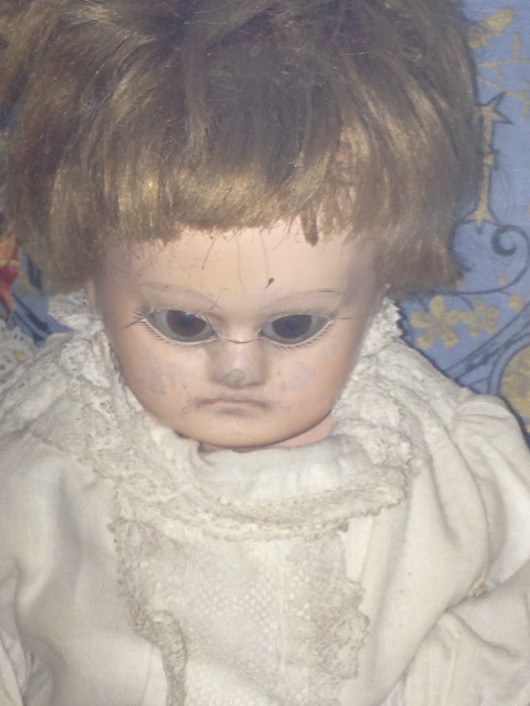 Be careful what you wish for! *manic laughter*

This a doll with Lena Dunham’s haircut from Series 2 of Girls** and/or the keys to a hell dimension. She does not like you being in her house. She will look at you like this until you leave, staring deep into the remnants of your soul. 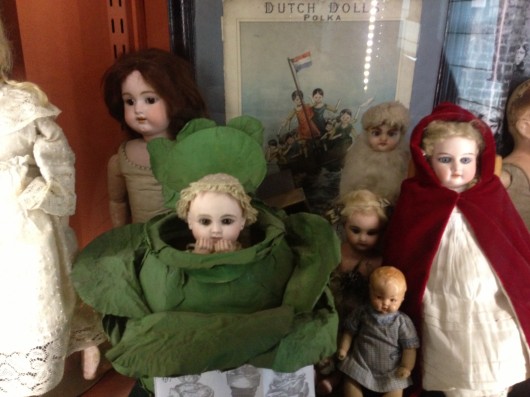 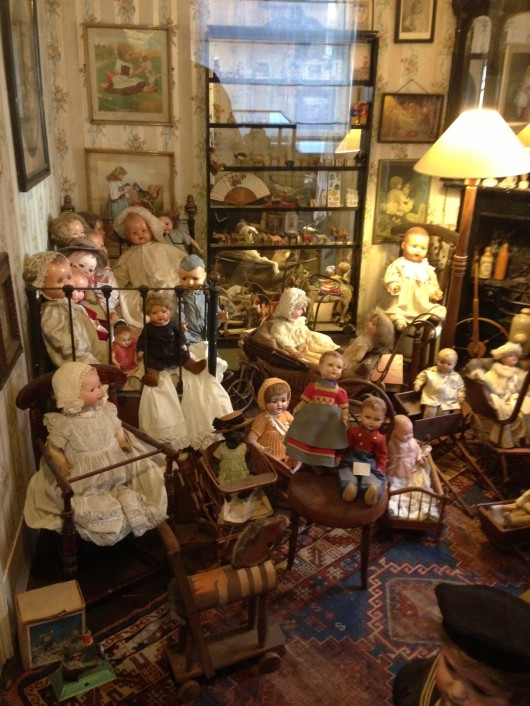 Thousands of dead eyes, glared at me from all angles. There was no escape. I began to move very slowly and carefully, lest one of them animate and try to take my eyeballs.

This is not a room for those who scare easily. Or are able to be scared. Or are living humans.

As I crept towards the door, the creepier they got: 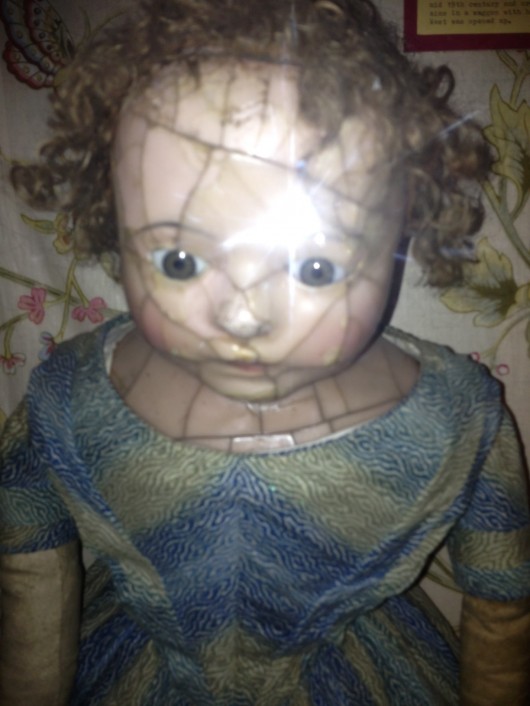 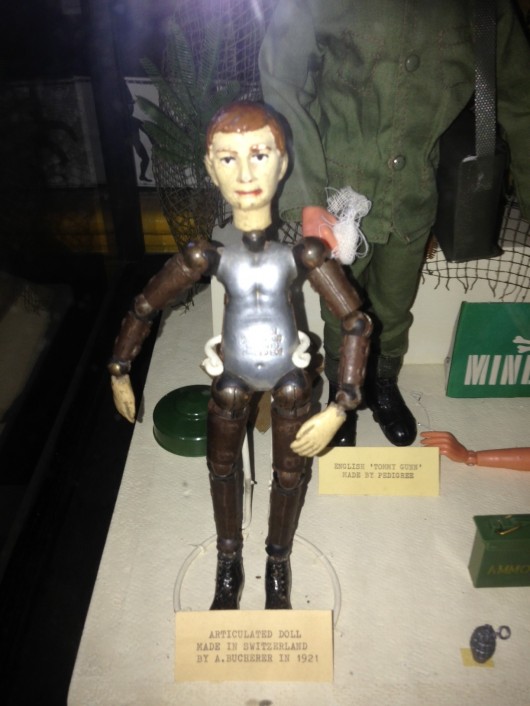 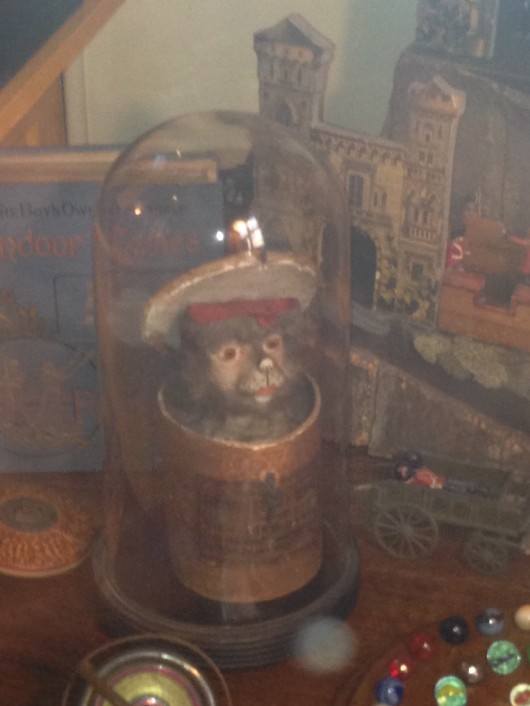 NOT EVEN A LITTLE BIT 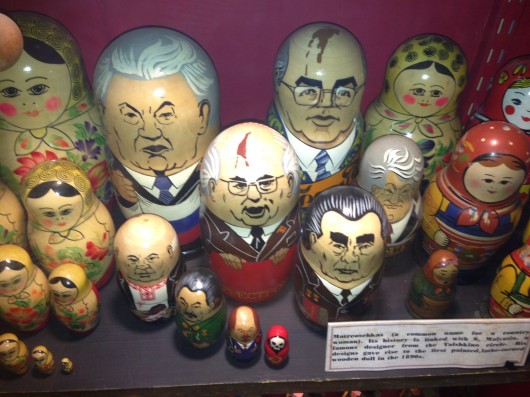 Okay these guys were just quite funny

Reaching the end of the time any sane person can spend in a dusty four-storey townhouse filled with dusty humanoid statues, I ran desperately down the stairs towards the front door. My ordeal was over. No longer would I have to stare at the faces of trapped souls judging me from their shiny cases.

Oh, wait , there was one left. Luckily the owner had decided to leave this little guy at the bottom of the stairs: 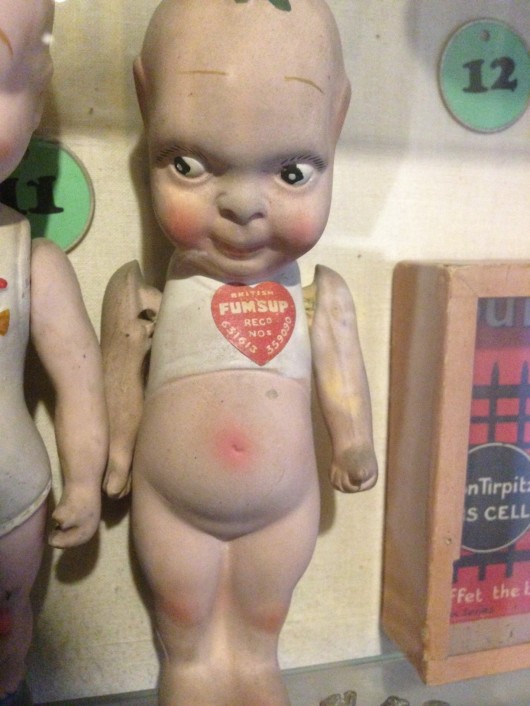 I never got the answers I needed. Straight after seeing ‘death-baby’ I  screamed “enough!”, bid a sweaty adieu to the man behind the counter and walked briskly out in the cleansing light of day.

Would I recommend it? Aside from being unable to stop crying for a good portion of the day, I did learn a lot about toys, history and different cultures, and it was definitely more interesting than the aforementioned Sabrina session. I would however advise you to go with someone else, you know, just in case.

IN CASE OF ME 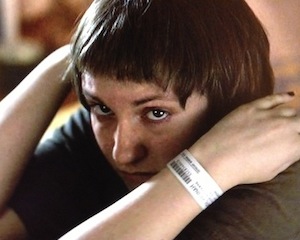