REVIEW: Jazzin’ All Over the World 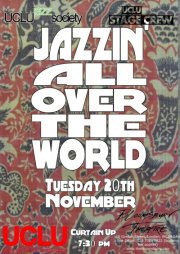 You have to admit, the UCLU Jazz Society knows how to put on a show. From a cheesy host with terrible yet funny gags, to a wealth of musical and vocal talent, to a theme that brought together music from all over the world one thing is for certain: there was a little something for everyone.

With a name like Jazzin’ All Over the World it was very apt, if a little predictable that the opening number, sung by the host for the evening was the Frank Sinatra classic Come Fly With Me. Finishing to a rapturous applause we were then introduced to the acts with jokes – some so awful there were actually rather funny!

What followed was a series of musical numbers from big band to small band, gypsy jazz to…reggae (yes, you read correctly. UCLU Jazz Society, bringing a piece of sunshine to our English winter…) All were performed with enthusiasm and pizzazz. Whether it was a lively band song, a soloist or a number by the Jazz Choir, each song brought something fresh and exciting to the performance. Be it slick, confident vocalists with voices as velvety as melted chocolate, or skilfully intricate runs by the musicians, the night never failed to deliver on the entertainment front. 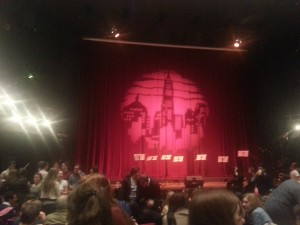 Particular highlights of the show included Route 66 performed by a very talented student complete with fantastic harmonica solos, the Spanish sounding Malagueña with castanets in hand, and the two French songs. The performer of Zaz’s wonderful song Les Passants had a particularly impressive vocal ability, whilst the Gypsy Jazz Group took the audience to the streets of France with their rendition of J’attendrai. The Jazz Choir delivered some fantastic harmonies in their many songs, the best being a fantastic interpretation of The Beatles lesser known song This Boy, whilst the Jazz Band thrilled the audience with the closing number of the first act, Tank!, the theme tune to Japanese anime series Cowboy Bebop.

And there really was no better way to end the round the world themed night than with a beautifully moving rendition of the song made famous by the irreplaceable Louis Armstrong, What a Wondeful World.

The one criticism, if you can call it that, was that the names of the singers and musicians were not given next to the songs being performed in the programme. Next time, that would be nice…

A night of cheese, talent and pure musical brilliance, if you go to this show having never tried jazz…you’ll be kicking yourself that you haven’t gone to a UCLU Jazz Society show sooner! It’s truly a shame that it was a one night only performance.