Off to a cracking start, UCL win their first round of University Challenge

UCL tonight progressed to the second round of the 2012/13 University Challenge with a triumphan 260-85 defeat of Exeter University.

Composed of Adam Papaphilippopolous, reading for an MA in Philosophy, Tom Tyszczuk, a medic, captain Simon Dennis, who studies History and Philosophy of Science, and Tom Parton, Natural Sciences, the team were dominant throughout. 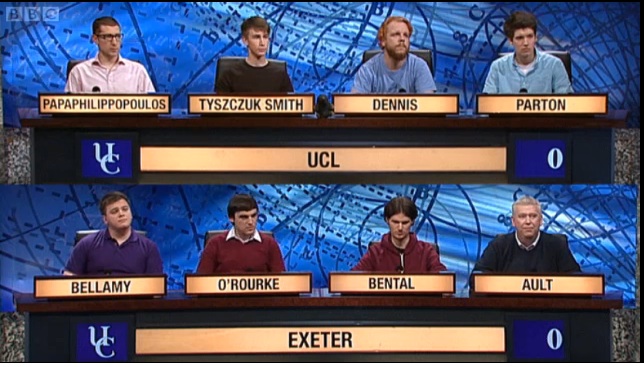 Despite an early five point deduction, UCL quickly got their act together. The encyclopaedic team captain Simon Dennis answered many of the starter questions, and the team were even able to navigate a bonus round on Essex (though the questions centred more on Roman towns than TOWIE).

The team seem to be as entertaining as last year’s semi-finalists led by purple haired mathematician Jamie Karran;captain Dennis has orange hair and looks like Russell Crowe, while the quick-fire ‘UCL Papaphilippopolous’ introductions are amusing. Regardless, the team certainly seem to have similar potential. 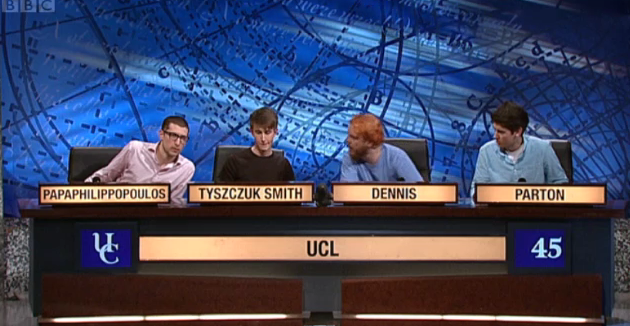 The quartet initially wanted to bring Jeremy Bentham’s head as their mascot, but spoilsport namesake Paxman unfortunately deemed it a bad idea.