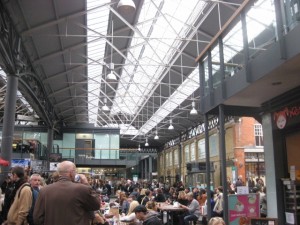 My friend and I started in Spitalfields Market. The building itself is beautiful: clean, modern lines with steel buttresses and lots of glass, which serves as a nice juxtaposition to the packed labyrinth of busy stalls. However, the ‘Market’ was decidedly disappointing. The perimeter is surrounded by chain restaurants and clothing shops: Giraffe, Carluccio’s, Strada, MAC, Fred Perry, and – bizarrely – Mischa Barton. This overbearingly commercial presence squeezed the independent vendors into a very small space. Alas, even still, the choice of products was disappointing in the market area itself, too. Stalls sold almost exclusively clothing and jewellery, and for a market, it was really quite expensive; few things were under £15 (definitely not a student budget) and I swear that I had seen several items in high street stores.

That being said, several of the jewellery stalls had artisanal and therefore truly unique pieces. My companion bought a stunning handmade beaded pendant necklace as a birthday present. At £15, it was pretty steep, except that the cost was to be shared among a group. Nevertheless, Spitalfields had a pleasant hustle and bustle, although I did perceive the main demographics to be (rich) locals, and tourists (with money to burn). 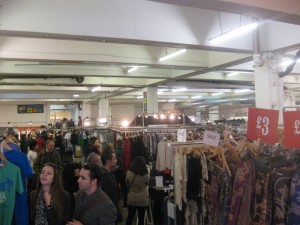 So, we went onwards to Brick Lane.

Immediately after crossing Commercial Street and onto Hanbury Street, there was a change in the tenor of the crowd. It was younger, more casual, and definitively more stylish. We entered the Sunday Up Market on Hanbury Street by the Old Truman Brewery. This was how Spitalfields should have been. Each stall had such different styles of clothing and jewellery, that we didn’t know where to look – they were all special. I bought a silver lion ring for £5 (much more student budget-friendly). The food area was the busiest, with a plethora of cuisines, including the standard Chinese, Japanese, Indian, but also Ethiopian, Pakistani, Iranian. And, from the hoards of people lounging on the pavement outside eating delicious smelling and delicious looking meals out of takeaway containers, the food was really good. 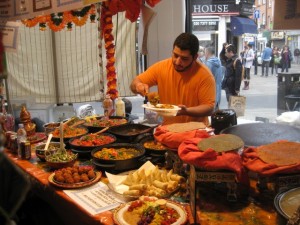 Care for a nibble?

Exiting out of the Sunday Up Market, we rambled down Brick Lane. Each corner and stretch of pavement had a different site to see. We encountered enthusiastic (and pushy) men promoting the family curry house, hipsters in fedoras playing in a grassroots band, someone playing a didgeridoo. My favourite was a man clad only in a string vest and trousers, with a Jamaican flag draped over his shoulders who was rolling a cigarette while bobbing along to blasting music behind him. Whether he was a street performer or just having a good time, I don’t know, but he was pretty awesome.

Brick Lane is a fun place and a fun experience because of the huge variety of people and things to see. The balance of day-trippers, families who have been there for generations, and locals creates a buzz that is positively infectious. Cheap and fun – what more could a student need?