One year on from the 2017 Women's March – which took place after the inauguration of President Trump – women and men of all different ages, races and religions united once again yesterday on Richmond Terrace to fight for equality and justice in the Time's Up Rally. Since the first Women's March in Washington DC a year ago today more and more issues of gender inequality have been arising. 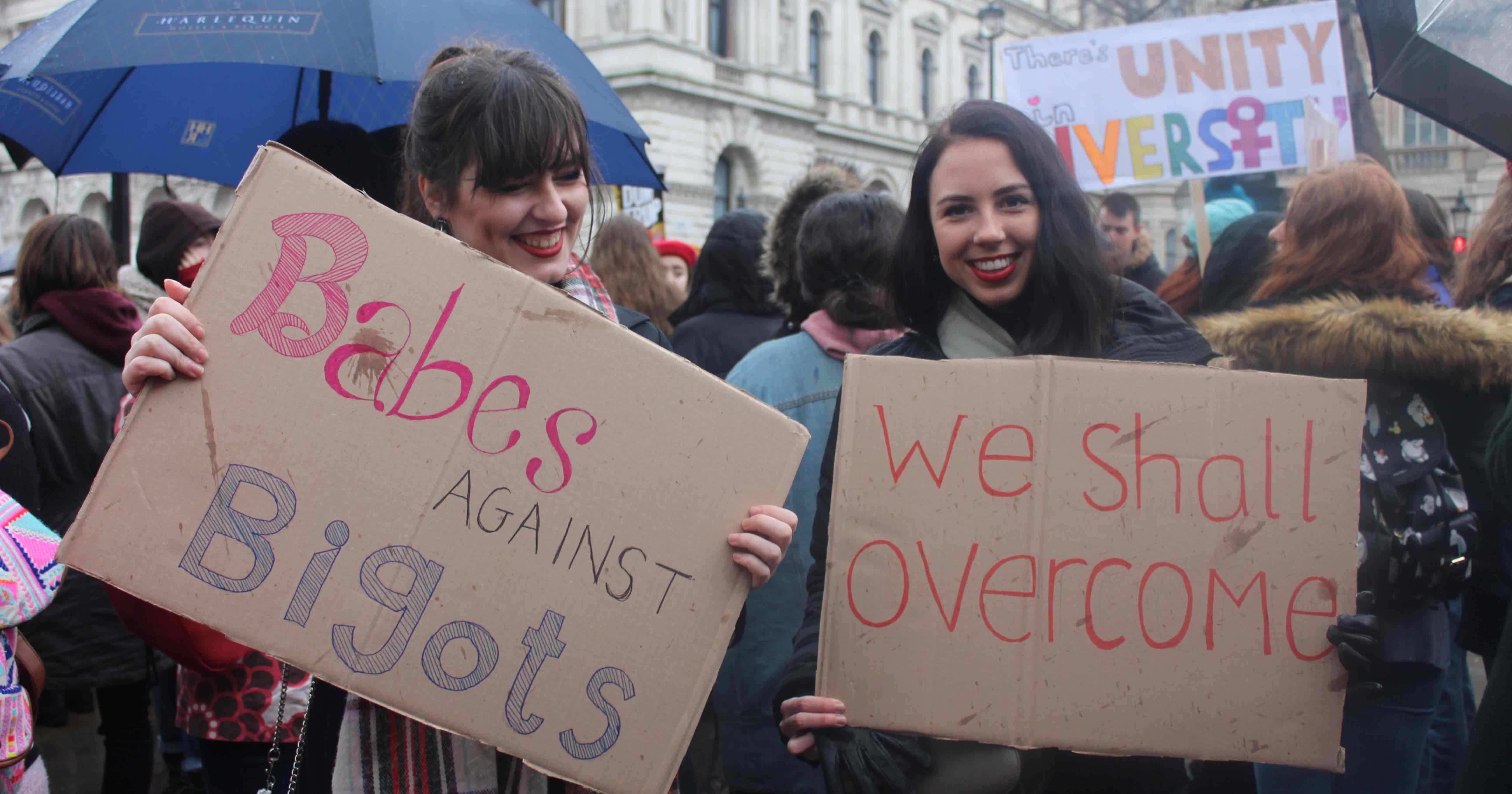 In the last couple of months gender pay gap issues have become more widely spread, big companies such as the BBC and Easyjet being culprits. Sexual assault scandals in the film and television industry are increasingly being publicised, yet many of the predators have gone unscathed with minimal criminal charges. It is 2018 and tampon tax is still a thing?

Most importantly sexual assault and domestic violence are scarily amore common than it ever should be. Yesterday hundreds of people decided enough was enough and we met a variety of people to determine why. 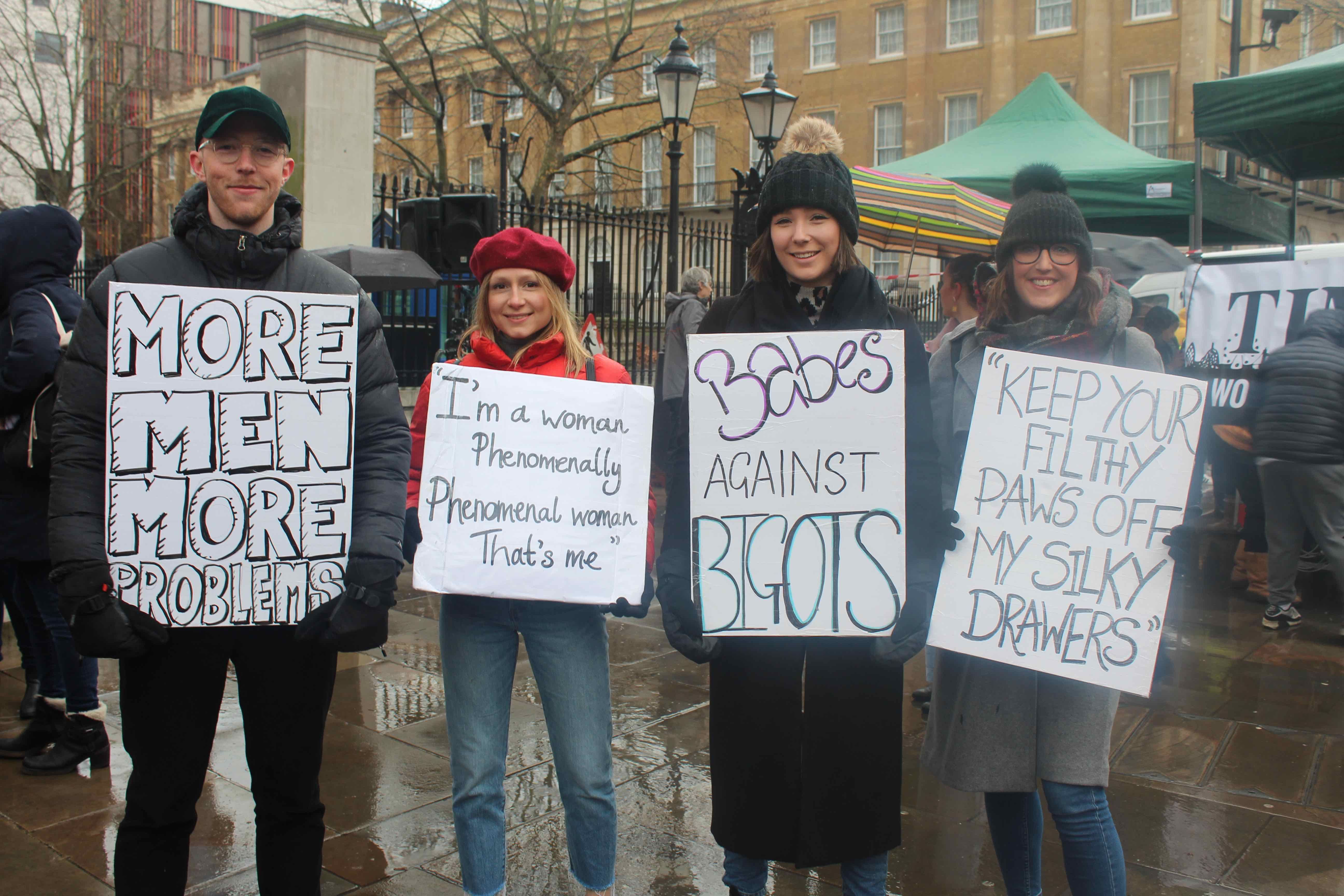 I came down today because after seeing the turn out for the protest last year, I realised that this is an issue that millions of people really do care about. Before it was just kind of like everyone's a 'bit' of a feminist and it felt like it was more of an online movement.

Yet we are beginning to see more and more of these issues occurring in the real world, right in front of us, not just online. It is real and it is happening to everyone. Last year I couldn't make the March, so I felt like it was my duty to come down here today and stand with everyone else. 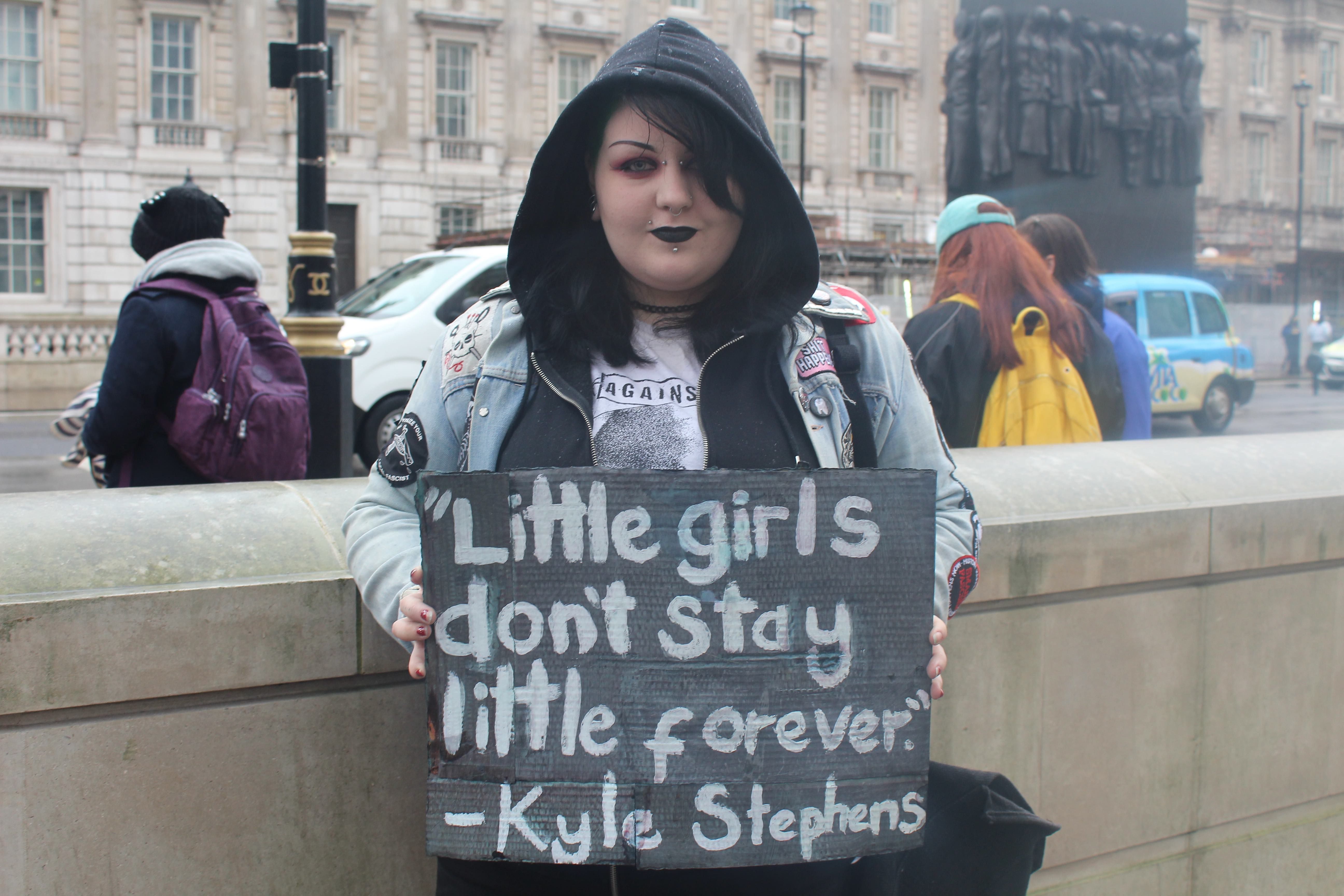 I am an exchange student studying at Oxford from the States and I am here to stand with my sisters here in the UK and all women's rights. Obviously it has been a rough year for all of us with Trump being elected and in the States especially there has been a lot of pushback with that as seen through the woman's marches there.

It's really awesome to see women around the world standing up for this and brought this issue to light. It's not just an issue in the states it's an issue everywhere so I am just really glad to see everyone around the world rallying together. 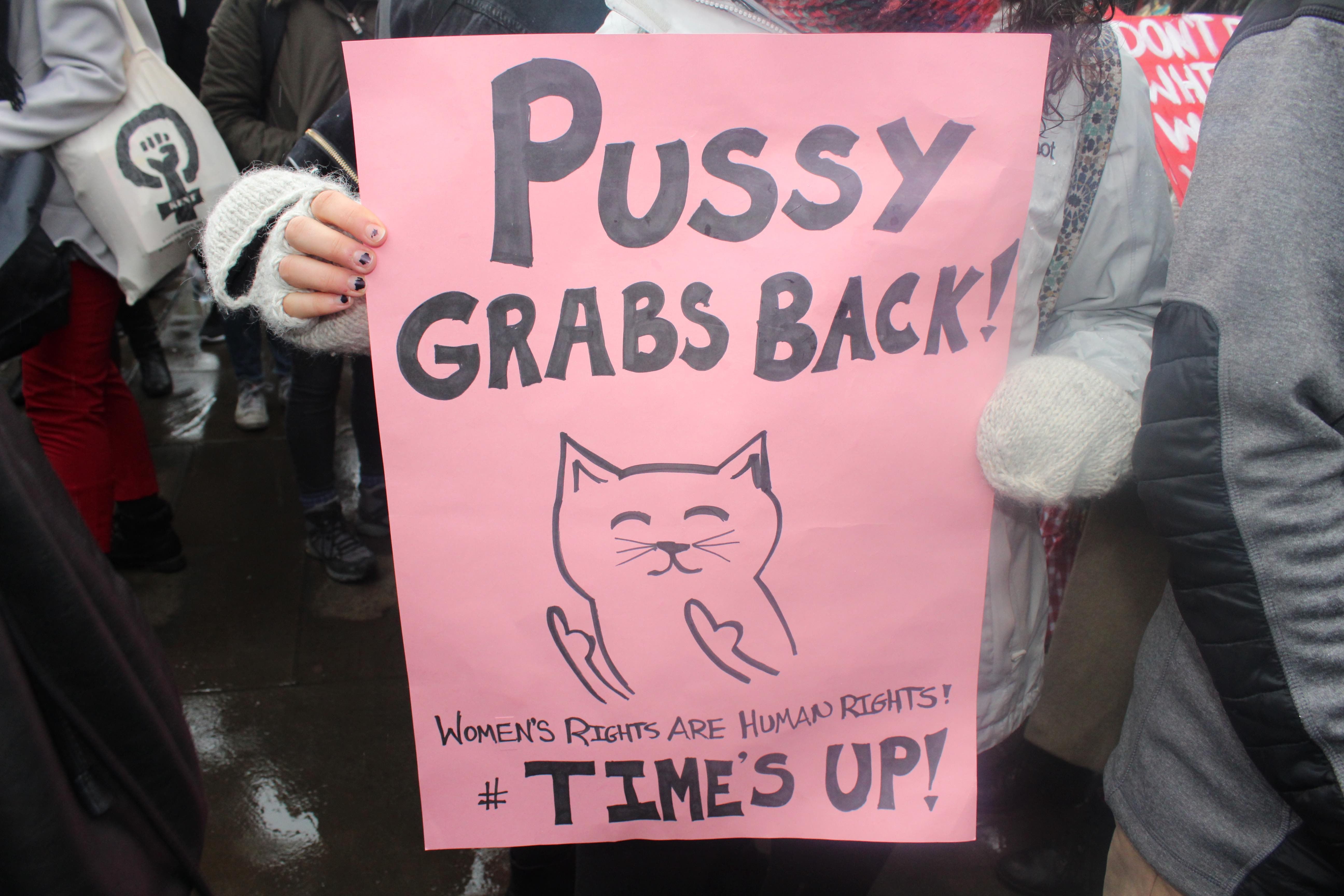 I guess for me the biggest issue is sexual harassment in the work place. I think it is over one in two women experience some form of sexual harassment at some point in their career and it is an issue that everyone is aware of but not many people are talking about it, or doing anything about it. I think my showing up and protesting we can make the point that it is an issue that requires an institutionalised change, not just individual places. 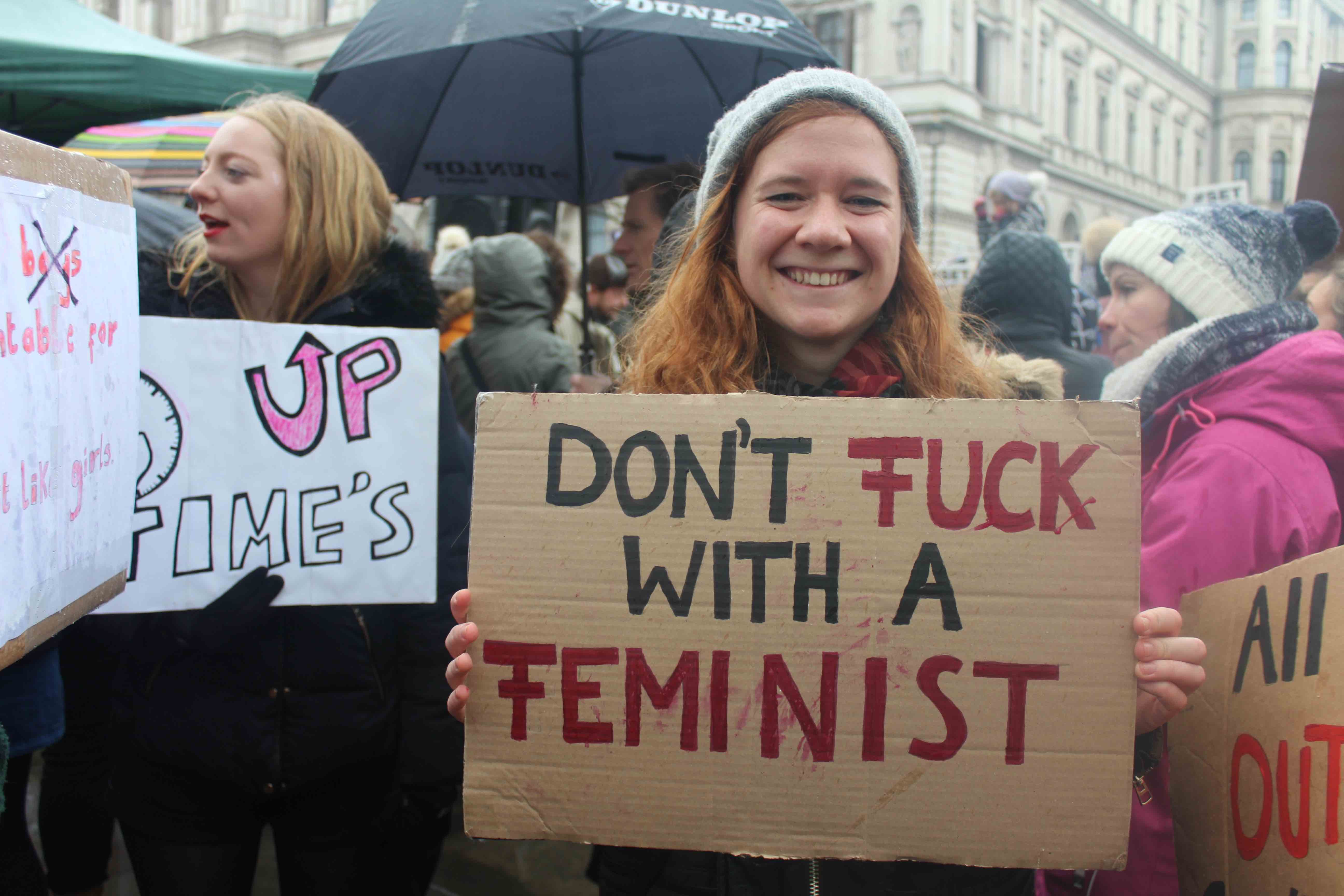 I think as a teen in this generation we have so much to share, and with social media as well, and we can have such a powerful influence. I think we need to do more than just posting stuff on social media though, Yet you've got to come out to events like these and be a part of it. We are the future, so I think it's really important for us to be here standing up for what we believe in. 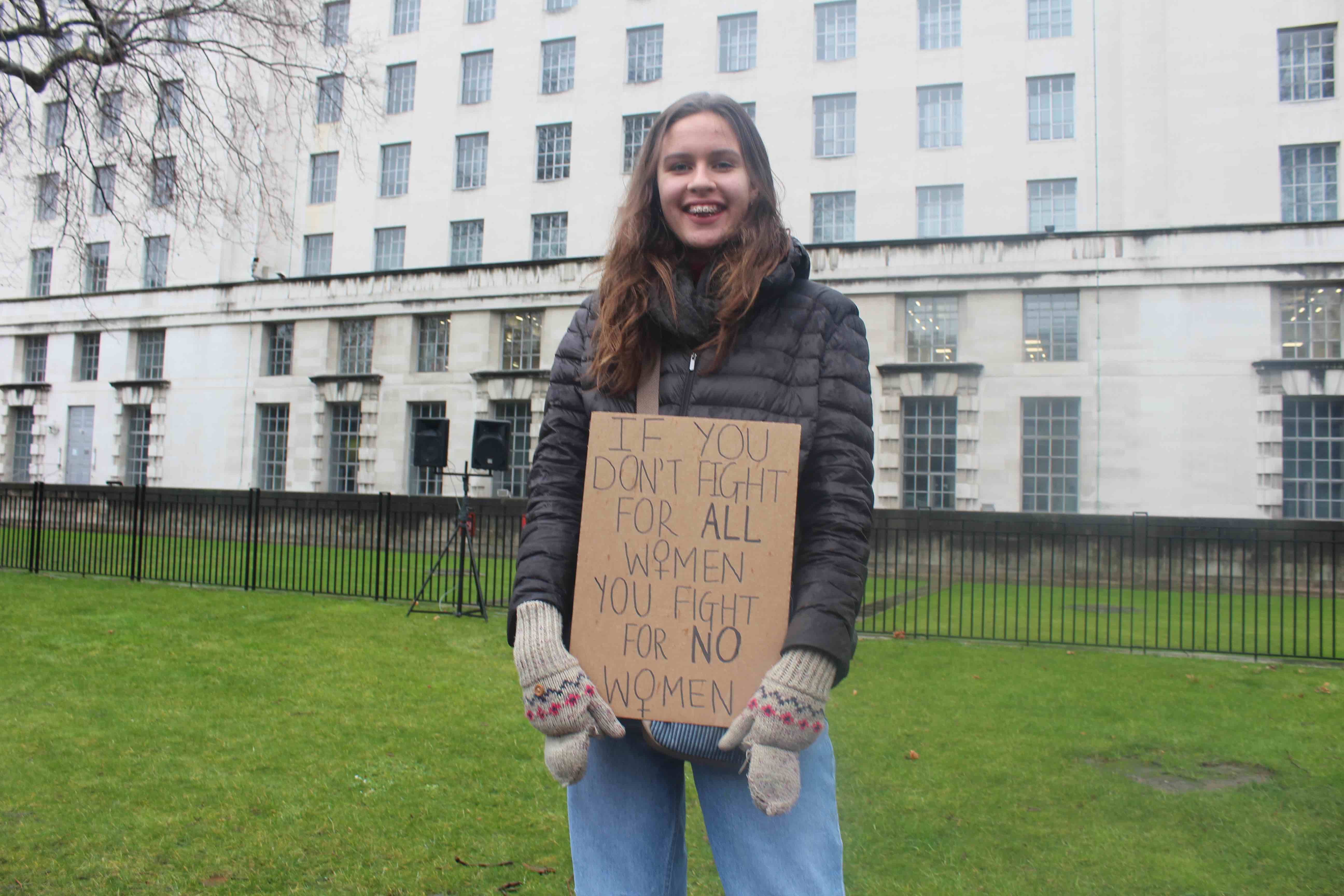 I am only 17, but I feel like if we can start changing the world at a younger age then it'll help change the generations after us, and it'll hopefully disappear by then, or at least be tiny. People who are older than us don't seem to realise how big a problem it actually is, so by starting young, it is showing to other generations that it is not okay. 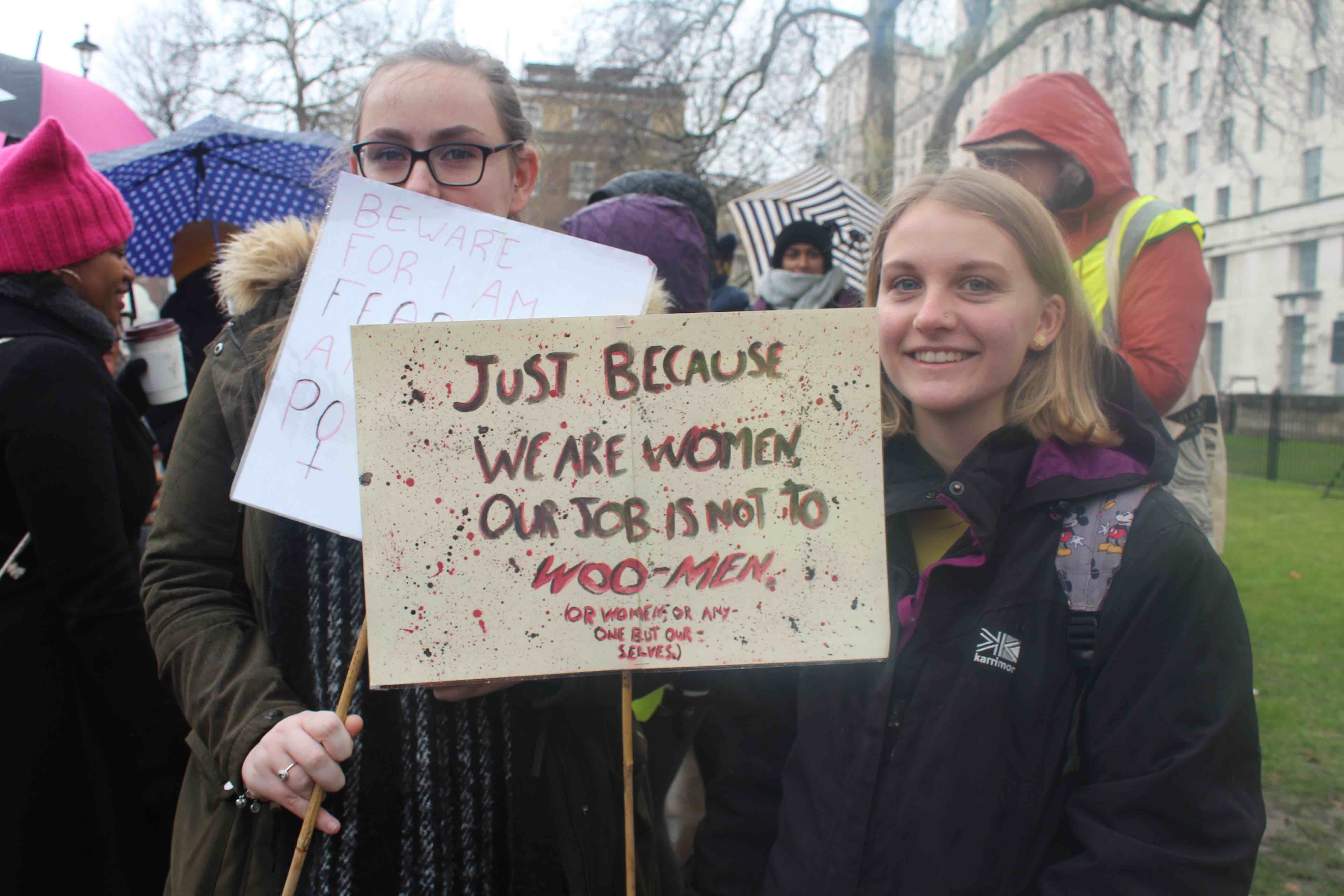 I think what made me really come today, is that there is so much awfulness going on in the world today! Obviously a lot of it is to do with Trump but it is good that this has sparked a revolution and is happening in our own country and our own area. We can look at these issues as singular to us in the UK, but also now we can look at it more globally. So it's about bringing a worldwide togetherness so you have so many different ideas coming through, which is really, really exciting to be a part of. 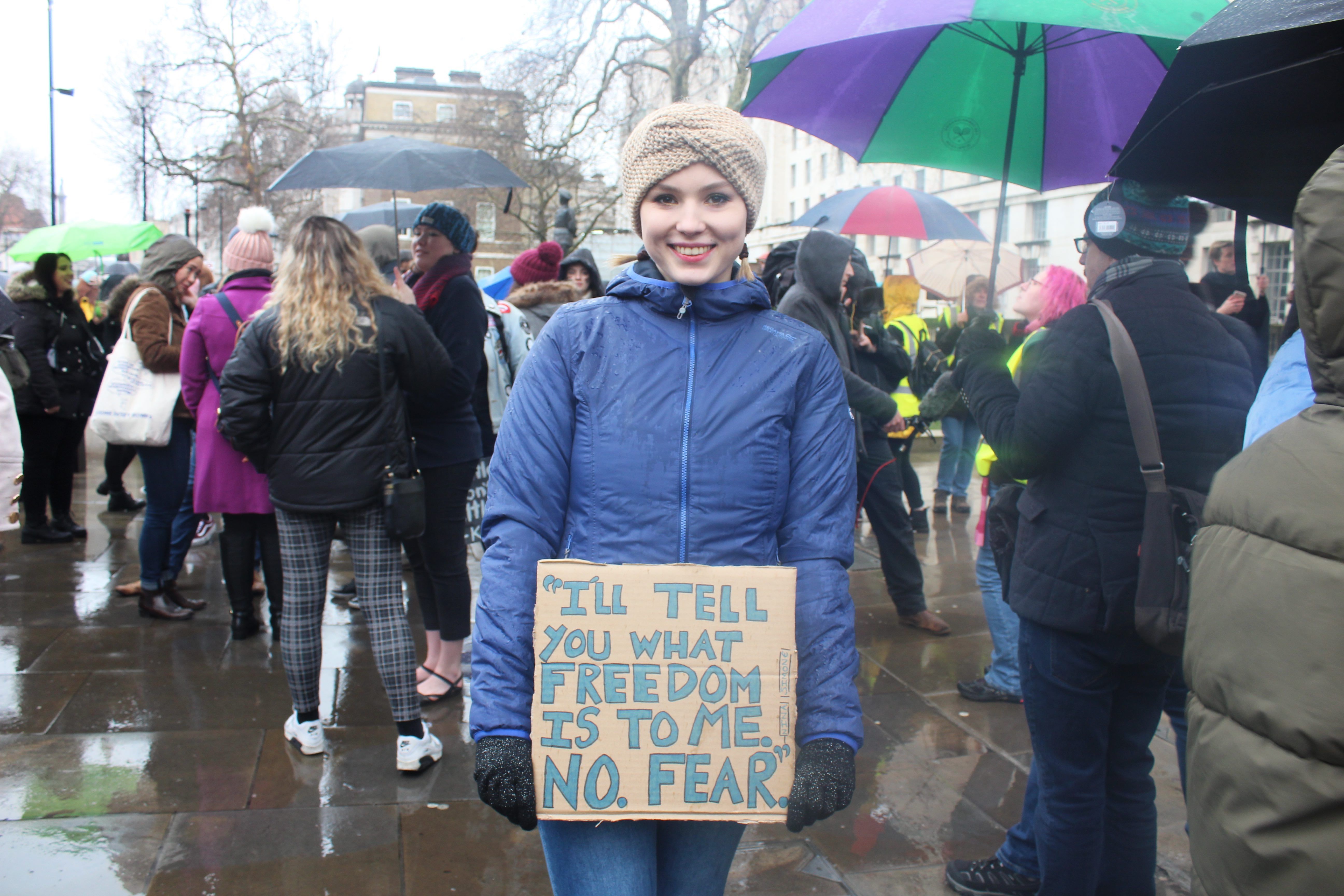 We want to show solidarity even though it is raining and snowing. 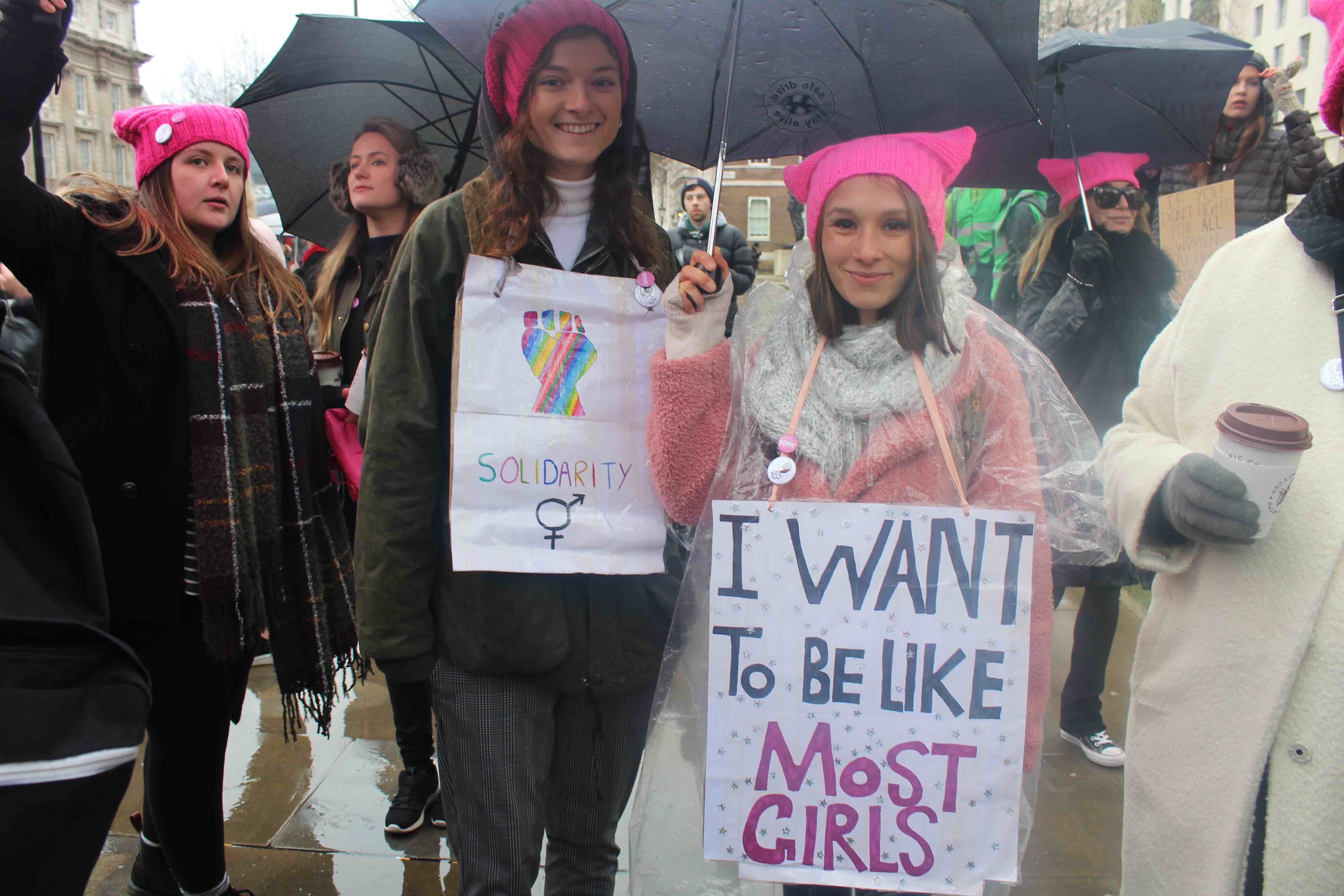 This stand is for the Bloody Good Period. As a charity we collect all menstrual products for refugees and asylum seekers and woman in need and we distribute them around London. They are fantastic. I am here because of general inequality and being really sick of it.

And also what I think is really essential is that I am really tired of the inclusion of 'good men' and I want more to be done for the actual perpetrators and I want to see convictions and full on punishments for those who are perpetrating violence against women, who are male. 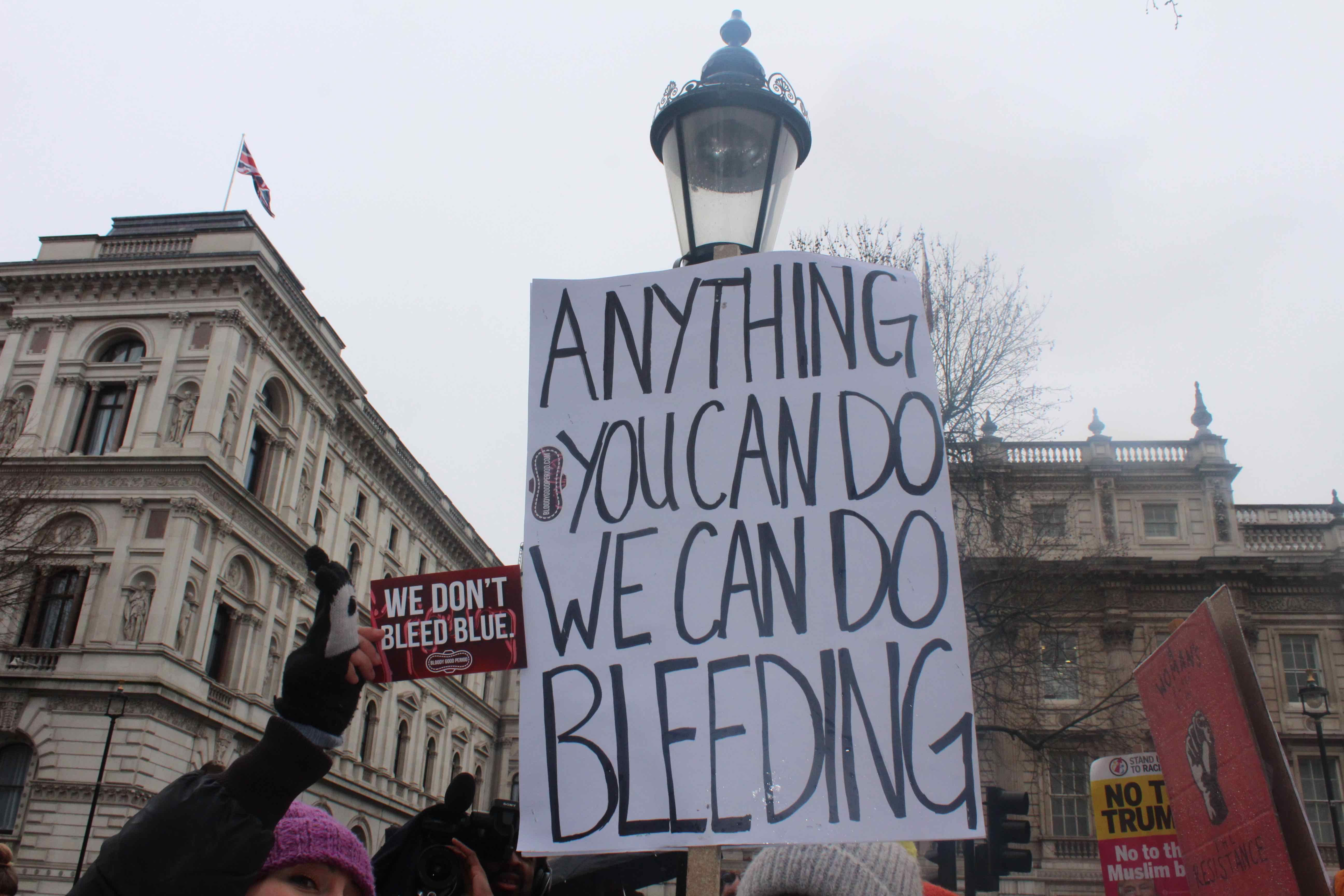 Well obviously we are feminists, and we didn't get to go to the march last year and we felt like we really missed out. We wanted to show our support for the Time's Up campaign but also all kinds of equality like Love Wins, Black Lives Matter, everything. 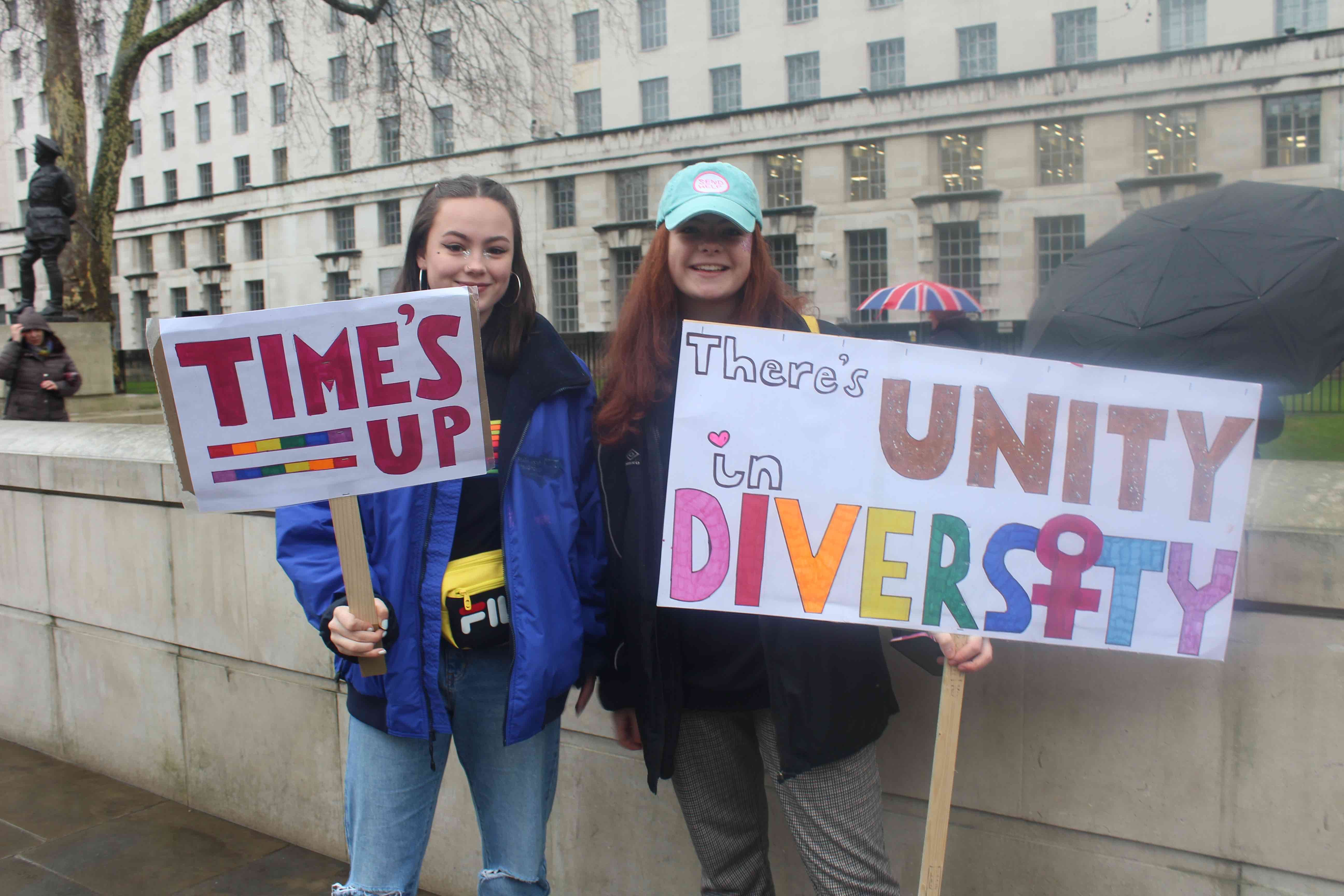 To the man sitting in the pub on my home from the protest who questioned why on earth I would stand out in the snow and freezing cold for two hours when there are no gender inequalities in this country, this is for you.