‘We thought it was a prank’: Exeter students react to Penny C eviction

‘We got told that we have to move out to alternative accommodation where we would have no friends, no compensation and with our stuff in crates’

On Tuesday, The Exeter Tab reported that 27 freshers were facing eviction from Block A of Pennsylvania Court to make room for quarantined students returning from Italy.

Those who live there were sent an email informing them they would need to attend a meeting that afternoon to “discuss accommodation provision” where they were then told they would be moving into alternative accommodation so their rooms could be used to house those returning from Italy.

The University has apologised for the upset and frustration caused, but warned that there may still be times when they need to “inconvenience staff and students in the coming weeks”.

The Exeter Tab spoke to students facing eviction, who now face the daunting prospect of being separated from their mates and moving in to new halls all over again. 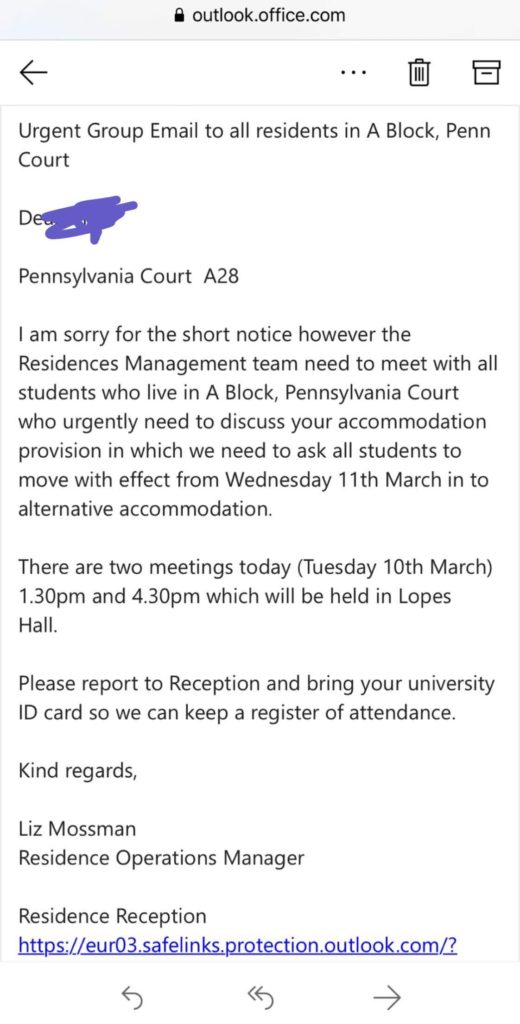 “Absolutely no prior notice. We were all totally unaware and when the emails came out people initially thought it was a prank,” one fresher told The Exeter Tab. “Within minutes the whole of Penny C was talking about it.”

Friends of the student explained that some were “panicking after rumours spread potentially coronavirus (COVID-19) students were going to be held metres away from them.”

The Exeter Tab asked whether the students were told in their meeting that Tuesday afternoon when or where they were going to be moved to, with the University offering little in response.

“At first meeting we were being registered and a few of us noticed next to our names on the register were the names of the accommodation we were to be moved into.”

She went on to say “it baffles me as to how they think it’s okay to just kick us out and chuck us into random accommodations on our own”, adding “the lady that spoke to us wouldn’t actually let us see where we were being moved to, even though she was telling us we had to be out by 9am the next morning.” 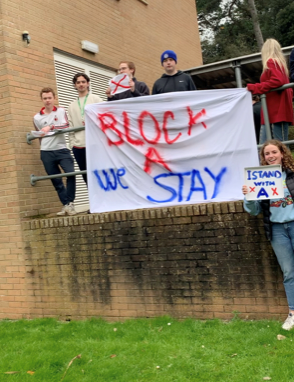 After “many” students’ parents rang the University “in a state of panic”, there was a meeting on Wednesday morning where the freshers were told the plans had apparently changed.

“We were told the plan was no longer for us to move out today and they apologised for the poorly communicated emails which implied we were being immediately evicted from our rooms and separated into other rooms all across campus.”

This did little in the way of alleviating student’s worries, with one “almost in tears” when he was told he’d be moved to new accommodation.

“It seems they have massively neglected the mental health and well-being of us as Exeter University students.”

A student we spoke to said that she felt that her and her friends had “been treated like numbers” especially at the meeting when they heard they were “just randomly given other rooms they didn’t even think to ask us if we had anyone we’d like to stay with or any preferences”.

Another resident who attended the meetings explained that the University “hadn’t devised a clear strategy of how the block A isolation unit would of actually worked.”

When they asked about food and washing facilities for the quarantined students coming back from Italy they gave “gave unclear answers” showing the “naive approach the university had taken”.

This student did concede that Peter Scargill, Director of Commercial, Residential and Campus Services, did make the residents “feel more comfortable about the situation” in stating that they would not moving out that Wednesday. 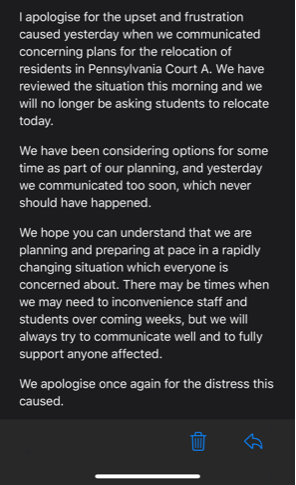 One of the students we spoke to said the suddenness of the news had had a negative affect on their anxiety. When she brought up her diagnosed mental health condition at the meeting, she claimed it was “completely looked over.”

“At the moment we are all feeling as though we have been left in the dark just waiting until they decided to move us” she added, clearly and understandably worried about the future.

A University of Exeter spokesperson told The Exeter Tab: “We apologise for the upset and frustration caused yesterday when we communicated our developing plans for the relocation of residents in Pennsylvania Court A. We have reviewed the situation this morning and we will no longer be asking students to relocate today. We have been considering options for some time as part of our planning, and yesterday we communicated too soon, which should not have happened.

“We are planning and preparing at pace in a rapidly changing situation and need to consider our public and community responsibilities. There may be times when we need to inconvenience staff and students over the coming weeks, but we will always try to communicate clearly and fully support anyone affected.”