A.K.A our attempt to manifest Summer Term in our kitchen

There isn’t much ice cream can’t fix. Honestly, there is nothing I miss more than spending money that I don’t have on food that I don’t need (but really want). Jack’s Gelato has a place in my heart as one of my regular dessert spots at Cambridge. Their ice cream is just too good, it hurts.

Sadly, we are all locked inside, miles away from Bene’t street. And while my bank account is currently thriving(-ish), my sweet tooth is suffering dearly. However, that doesn’t mean we can’t indulge from time to time. If anything, quarantine is the best time to get into cooking (and eating). Assuming you aren’t a professional gelato maker, here’s how you can recreate a few of Jack’s yummy gelato flavours at home with only a handful of ingredients! It’s super easy.

You can find the full recipe here. Essentially, you will need:

First, you whip the cream to soft peaks (be careful not to over-whip!) and you can do this either by hand (good luck), or using an electric mixer. Then, you gently fold the whipped cream into the sweetened condensed milk (plus your extras), freeze it and voila! You have cheats ice cream. It’s obviously not going to be the best ice cream you’ve ever tasted, but it’s still pretty good and it’s easy and quick to make. Here are our side-by-side reviews and recreations! 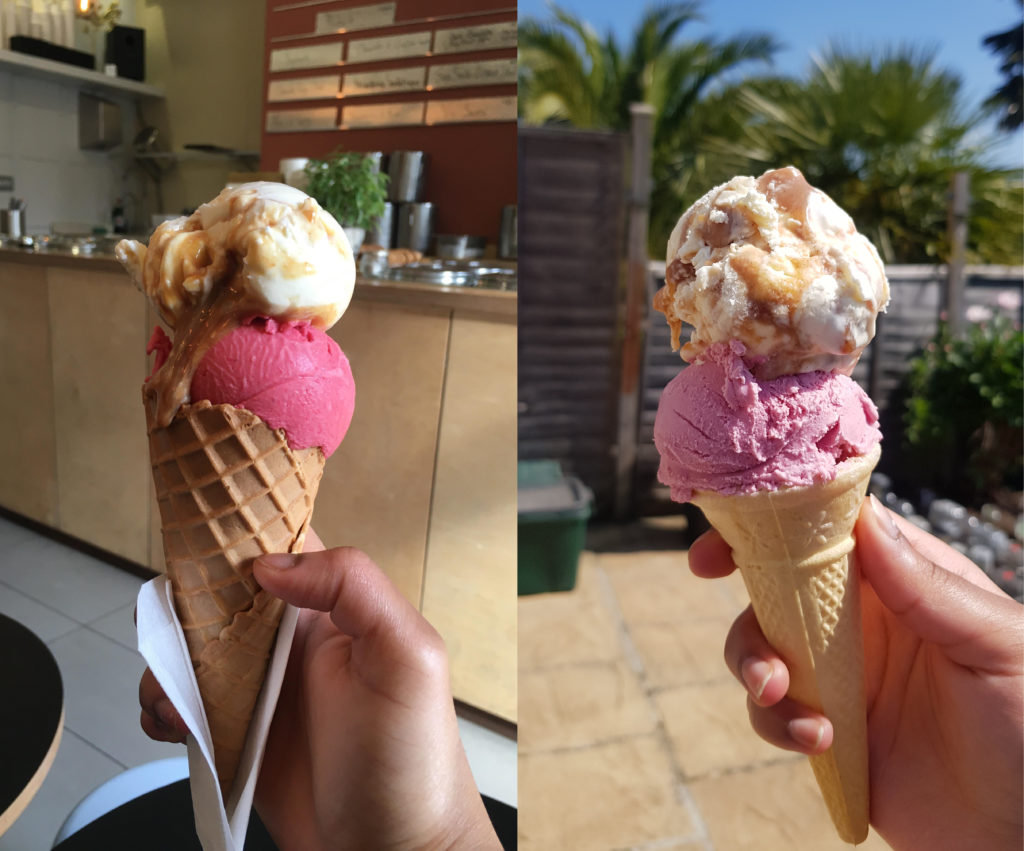 Wow, it’s like you can’t even tell which one’s the original…

Okay, first things first, I couldn’t get my hands on some waffle cones and that definitely down-graded my ice cream tasting experience. Whilst you can definitely tell it’s a cheats version, it’s still pretty tasty and worth giving a go! Now for the specifics…

Jack’s Gelato: This one was probably my favourite. I mean, look at that colour! It tasted just as good as it looked. There was a good tang that was balanced out with the right amount of sweetness. Plus the floral rose flavour came through really well without being overpowering at all. As expected, the ice cream’s texture was silky smooth and not overly creamy.

My attempt: The colour is definitely not as bright. I wonder if that may have had to do with the fact that I cooked down the raspberries before I added them rather than just adding it as a purée. Food colouring could also help. My version tasted good, but it was a lot creamier. The raspberry flavour was slightly lacking and the rosewater I used didn’t come through as well. I still ate it all but it needs some changes.

To make this ice cream, I cooked down 300g raspberries, juice of 1/2 a lime and 3-4tbsp of sugar on low heat. Once cooled, I mixed this into the sweetened condensed milk, along with 1 1/2tsp of rosewater. Fold in the cream and you’re done! In retrospect, I would double the amount of raspberries and the lime juice to cut through the creaminess.

Jack’s Gelato: I have a weakness for cinnamon anything so I really enjoyed this one. The ice cream itself was the perfect texture and not too sweet. The caramel was delicious as well – creamy and the right gooey consistency. My only complaint was that, whilst I definitely could have eaten another scoop of it, it was pretty rich. Still, nothing I can’t handle.

My attempt: My version also tasted pretty good, but again, nothing like the original. I actually preferred the taste of the caramel I made (I added the cinnamon directly into the caramel), though I think I could have made it a bit runnier so that it still oozed a bit coming out of the freezer. The ice cream again was really creamy and, for me, the sweetened condensed milk in the recipe already makes it pretty sweet. To balance this out, you could maybe use a salted caramel instead?

First, I made a batch of cinnamon caramel. To do this, take your favourite caramel recipe (or pre-bought) and add around 2 tsp (or as much as you like) of ground cinnamon. I’m pretty sure Jack’s Gelato probably infused the cinnamon into the ice cream instead, so you could choose to add the cinnamon into the cream mixture rather than the caramel (or do both!). Then all you need to do is alternate layers of ice cream and caramel into a tub, swirl it around a bit with a skewer and freeze. 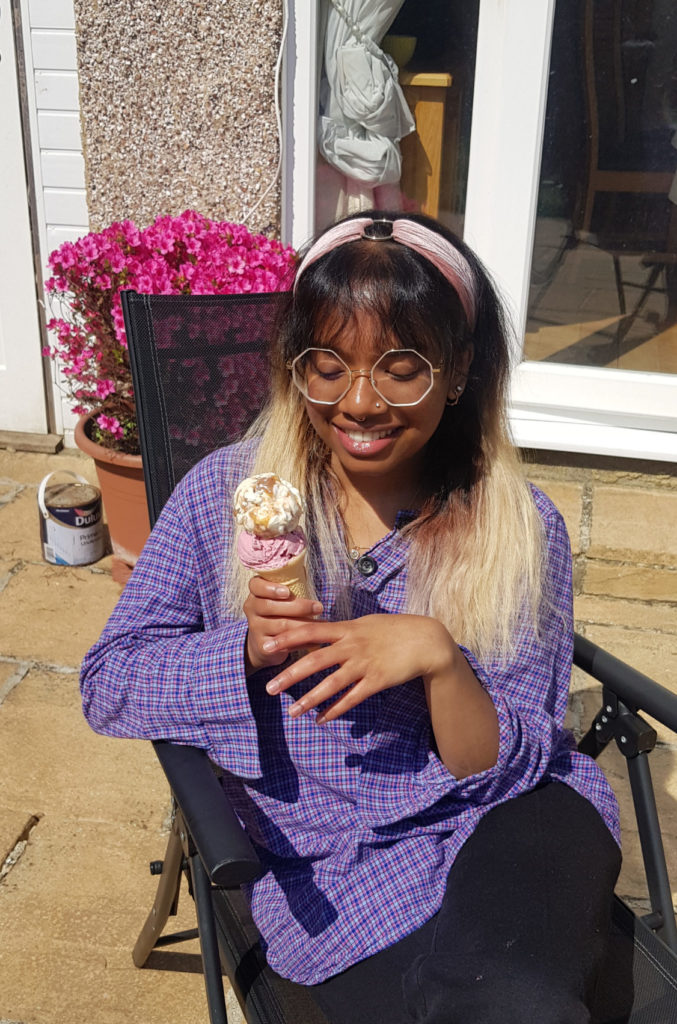 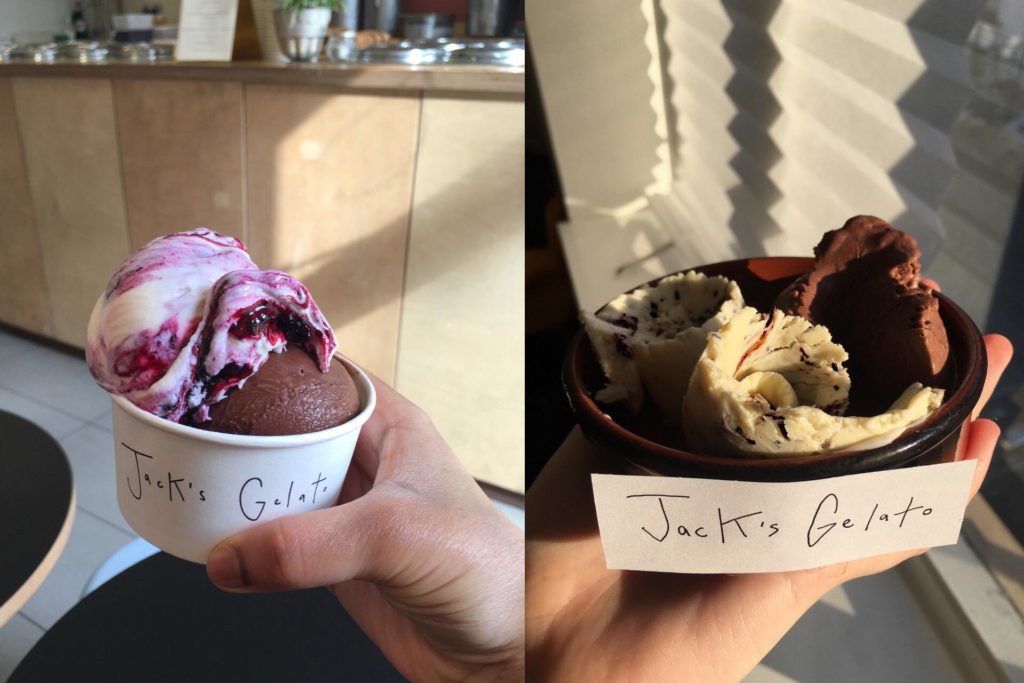 Look at that IMPECCABLE calligraphy

I don’t know if you noticed but… the presentation suffered a little bit here. I didn’t have a proper ice cream scoop and so had to use a tablespoon instead – but, on the plus side, it ended up making those little frozen rolls that people charge you about £6 a pot for, so, I’m counting it as a win – I think?

Jack’s Gelato: The perfect ice cream for a spring/summer day, especially when you’re sitting alongside King’s College in the blazing heat, caught in the middle of a water fight between a bunch of preteens (devastatingly, I can’t quite recreate that specific memory at home). Their ripple ice cream was super creamy, with each bite having little bursts of sour, pip-y crushed blackberry. It felt incredibly handmade (in a great way!), which was my only saving grace when making this ice cream.

My attempt: I couldn’t hand-crush the blackberries that well, so used a blender – but it came at a dire cost. I lost the precious pippy-ness. Besides that, it wasn’t so bad a knockoff. Was it Jack’s Gelato? Not quite. But it was still deliciously creamy and fruity, and I think if I tinkered with my recipe a bit (aka add a metric ton more blackberries to get the beautiful colour from the first pic), it could get close.

All I did to the base recipe was blend blackberries, (listen to your heart and then add a handful more, trust me), with a dash of vanilla extract to make them more easily swirlable. I then poured the resulting paste into the base and swirled it with a skewer. Voila!

Jack’s Gelato: It was really rich, bordering on too rich – it was delicious, don’t get me wrong, but super indulgent, and I couldn’t handle more than a scoop at the time – let alone the entire trayful of it that I tried to create.

My attempt: This ice cream came out even creamier than the blackberry, and was much more successful, in my humble opinion. It was a lot sweeter than Jack’s, which actually suited my taste better, as I’m not a fan of the super-rich dark cocoa flavour, so I ended up treating myself to an extra scoop. If you wanted a more truthful recreation, however, I’d recommend adding up to 10g more cocoa powder than I used.

All I did to the base recipe was add about 35g of cocoa powder and mix it until fully incorporated! 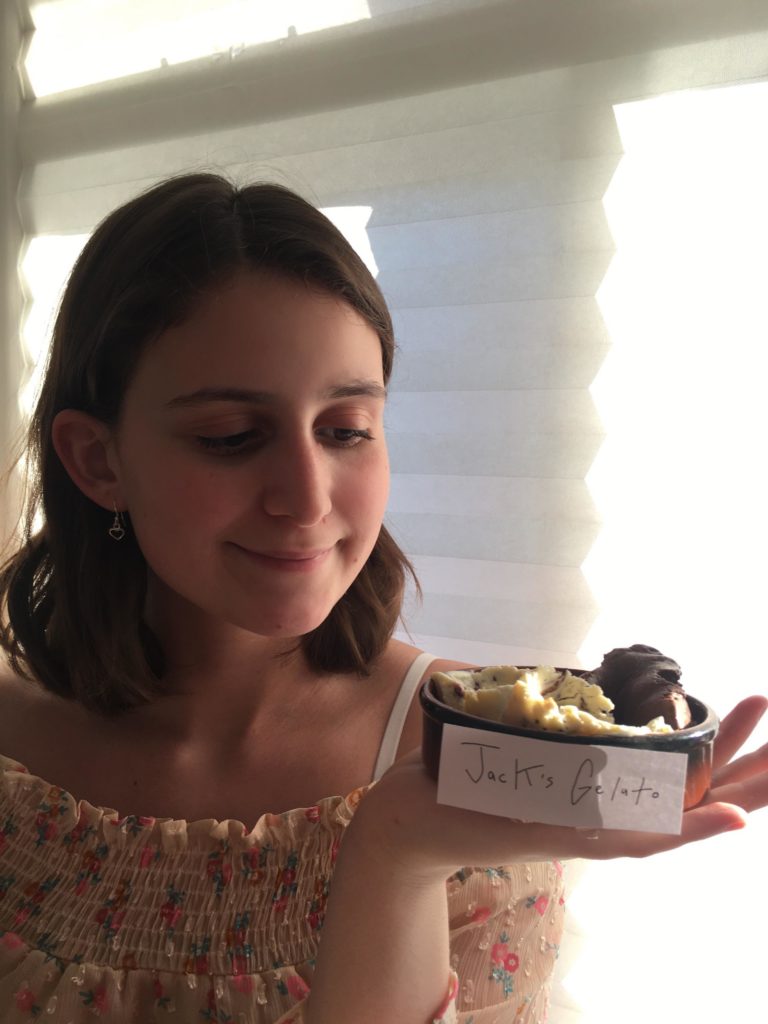 The look of a semi-proud mother…

Of course, Jack’s Gelato will always be leagues ahead of what is essentially a two-ingredient ice cream recipe, but compromises need to be made in lockdown. This recipe requires relatively no skill and can be easily customised to make any flavour you’d like! So instead of staring at the ceiling for the fifth time today or procrastinating those timed supervision essays that you will definitely not be timing, why not make some ice cream?