An extraordinarily modern exploration of self-identity

Perhaps unsurprisingly, revealing to my peers that my maiden voyage into the world of reviewing was commencing with a play called ‘COCK’ raised more than a few eyebrows.

But the Fletcher Players’ production of ‘COCK’ goes far beyond the connotations that arise from the play’s controversial title, instead forming a biting exposition of emotional control, fervent affection and tumultuous self- identity.

Mike Bartlett’s 2009 Olivier Award-winning work is ultimately a tale of self- reclamation; a complex battle against the often menacing passion of protagonist John’s long-term partner, the comfortable normativity offered by W and a desperate need to self-discover.

Bartlett’s protagonist, brilliantly played by Jamie Sayers, finds himself in an impassioned yet volatile love triangle. Having left the (albeit disorderly) comfort of his long-term relationship with M (Joe Pieri), John finds himself in a starry-eyed sexual romance with lonesome divorcee, W, portrayed by Hannah Lyall. What ensues is a paralysing state of indecision, with John’s hesitant uncertainty culminating in a turbulent dinner party scene, effervescent with cutting humour and gut-wrenching passion. 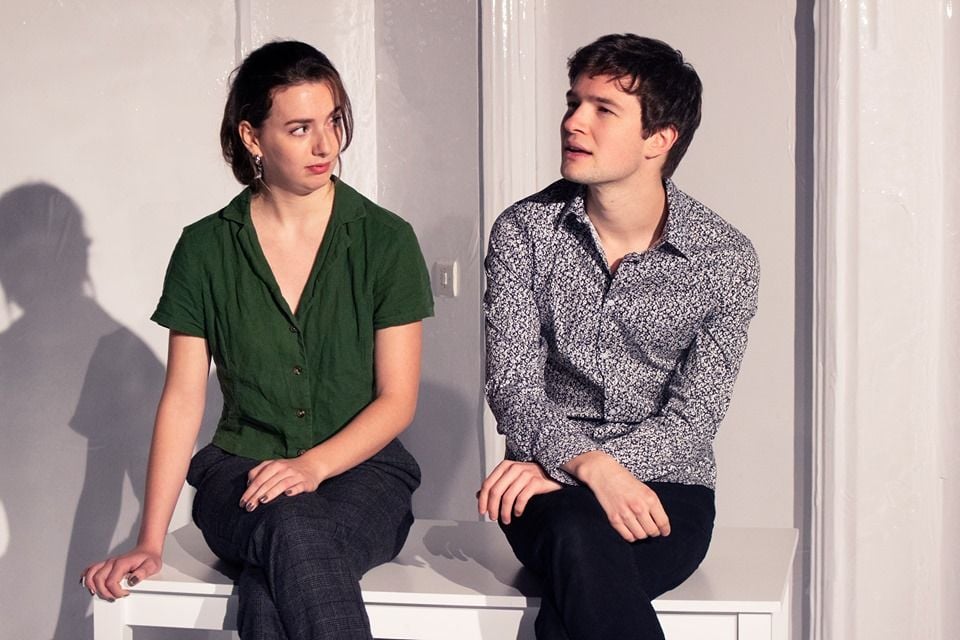 Director Maya Yousif’s take on the work is brutally refreshing. What struck me most was that ‘COCK’ was a play of constant movement – the actors never sitting down, the audience, and characters, never resting on conclusive decisions. The audience are by no means left to dwell in John’s debilitating indecision, and are instead engaged in a turbulent emotional fracas. Instances of sickening tension are interspersed with moments of genuine comedy. It is the success of such comedy that elevates Yousif’s production to one of significant quality. Far from detracting from the meaningful explorations into the complexities of sexual identity, these beautifully executed moments bind the play to a sense of true believability- even the abstract sex scene between Lyall and Sayers maintains an endearing realism.

Joe Pieri’s accomplished portrayal of M lends a large part to the success of this. Gifted with some brilliant dialogue, his execution and delivery must be credited, for the risk of clichéd over performance is hard to ignore. Pieri successfully enacts seamless and cogent transitions between the biting comedy and potent control that shape his anonymised character, compellingly crafting a peculiarly likeable emotional manipulator his character. 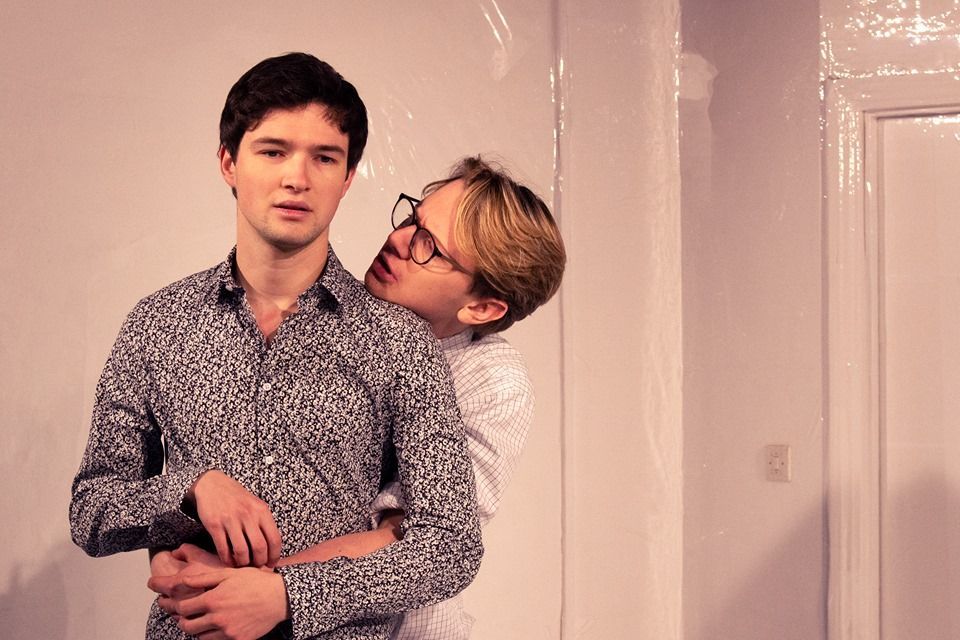 Jamie Sayers’ performance also pertinently captures John’s lack of definitive action, with his often dithering dialogue offering effective moments of tenderness amongst his tortuously frustrating indecision. Sayers’ performance at the end of the play was particularly convincing, demonstrating a visible pain; perfectly representing a desperate bid to reclaim a sense of self.

Both Sayers, Pieri and Lyall must be acknowledged for the surgical precision in which dialogue was executed, despite its noticeably complex tempo. The sense of self-assurance Lyall has crafted for W is truly admirable and refreshingly assertive amongst the frustrating paralysis of John’s indecision, yet she also maintains an endearing girl-next-door tenderness in her bid to not be described as ‘manly’.

Amongst the tumult of the dinner party scene, Kim Alexander’s F (adapted from the original script) offers a restorative sense of decisiveness, at once capturing a believable maturity and representing a pertinent misunderstanding of the nature of bisexuality. 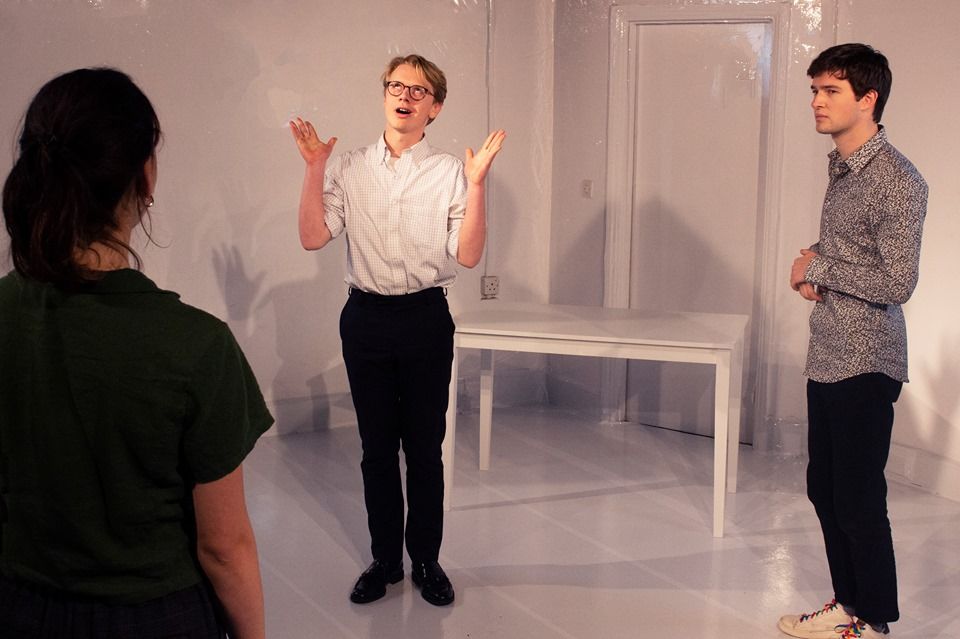 The play takes place exclusively on Isobel Wood's wet-look, starkly white set. The shocking minimalism of such a set forms a catalyst of intensity, the barrenness of the on-stage landscape providing a thought-provoking setting for a physiological illumination. The use of lighting is similarly innovative, with disorientating transitions between bright white light and absolute darkness effectively mirroring John’s own sexual disorientation. 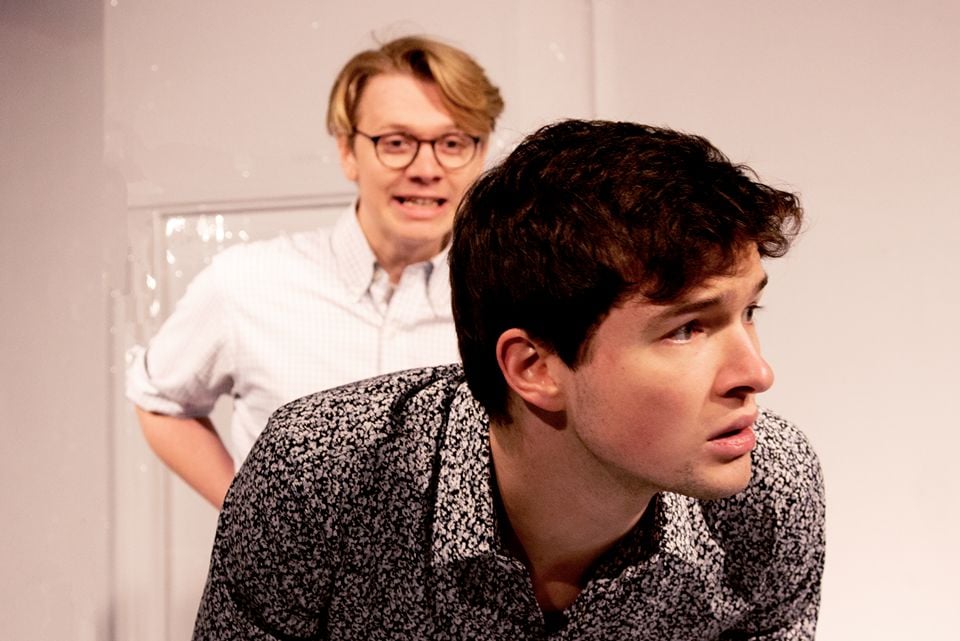 It was slightly disappointing to see that use of sound lacked such innovation; the use of a startlingly beat marked a significant yet natural transition in time, place and dialogue. Whilst undeniably effective, this did somewhat feel like the obvious choice. The show did not have a specific sound designer, which perhaps showed.

‘COCK’s protagonist is described as “a collection of things that don’t add up”. Yousif’s production engages with this, crafting a balance of striking binaries- black and white, tragedy and comedy, gay and straight. Yet far from not ‘adding up’, this production is seamlessly cohesive.

In exploring a series of cock-ups and cockfights, a must-see masterpiece has emerged.